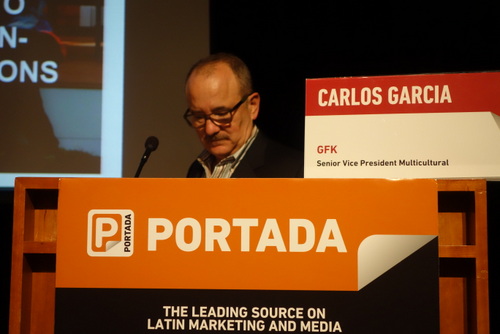 #Portada14: The unended Quest-How to best connect with a changing Hispanic audience

One of the highlights of Portada’s the 8th Annual Hispanic Advertising and Media Conference was the expert panel discussion “The unended Quest: How to connect In-Language or in-culture across generations.” The panel, presented by GFK, was moderated by Carlos Garcia, SVP Multicultural at GFK with Maria Lopez Knowles, CMO, Pulpo Media, Leonardo R. Torréss, General Manager of DishLatino, Vilma Vale-Brennan, Managing Partner, Multicultural Lead, MEC and Steven Millerman, CEO, Prime Access as panelists.

These insights seemed to resonate with Pulpo Media’s Maria Lopez Knowles who noted that “she never watches TV anymore.” Prime Access’ Steven Millerman noted that video is a key component in the new multichannel distribution model, but that “TV still is a huge driver.”

According to GFK’s Garcia, “Univision and Telemundo are not doing enough to address the Hispanic consumer”. “They are showing someone else’s life,” he noted, referring to the large amount of Latin American produced telenovelas the broadcasters air.

Univision and Telemundo are not doing enough to address the Hispanic consumer. They are showing someone else’s life.

Should a media properties name reflect its Hispanic identity?

DISH Latino’s Leonardo Torréss, emphasized that it is very important to reflect the Hispanic identity of a media property in the media property’s name. As examples he cited DISHLatino or People en espanol.