Ben Jankowski, Group Head Global Media at MasterCard, has just been added to an impressive roster of speakers at our Portada Latin American Advertising and Media Summit on June 4 and 5 in Miami. (Make sure to take advantage of the early bird registration expiring this Friday April 12). 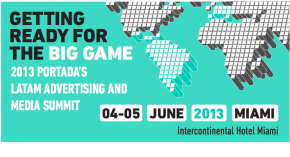 Jankowski will jointly present with Virginia Pereira, Head of Media, Latin America on how MasterCard has activated sports around the world with a special emphasis on the 2014 Soccer World Cup and 2016 Olympics, both to take place in Brazil. The theme of this year’s Latam Summit is “Getting ready for the Big Game.”

Jankowski is one of several marketing and media luminaries that will participate in the Summit. They include:

– Claudio Ferreira, Publisher, Veja Magazine. Veja is the second largest magazine in the world ranked by circulation and the largest and most influential in Brazil. Ferreira will provide an in-depth overview of the latest economical and political developments in Brazil as well as an outlook for the next decade.

– Nick Denton, CEO and Founder, Gawker Media. The British journalist and internet entrepreneur will talk about the latest trends in digital media.

Additional speakers we recently got confirmation from, include Mario Cordon, CMO of Open English, a top 15 Cable Advertiser in Brazil and of Todd Wilson, SVP, Managing Director Starcom, an agency whose media buying and planning accounts includes Samsung, Telefonica and Procter & Gamble.

Portada’s Latam Advertising and Media Summit is the Annual Meeting point for the Global Latin Advertising, Media and Content World (Latin America, U.S. Hispanic, Spain). In its fifth annual edition, and taking place at the newly renovated Intercontinental Hotel in Miami, the 2013 Latam Summit will be a two-day event brimming with fresh ideas, market intelligence and networking opportunities. The Summit can be sponsored and attended in combination with the Latin Content Marketing Forum , which takes place in the same venue in the morning of June 4. Take advantage of the early bird combo rate to attend both events (expires this Friday April 12)!