Alejandro Fishman’s opening presentation focused on how to “reach the digital consumer.” “Consumers no longer want scheduled consumption, but to  choose what to consume, when and where,” said Fishman. Under the slogan “The future has a starting point” , this year’s IAB Now focused on multi-screen consumption and the measurement challenges that involve they delivery of ever more personalized content.

Fernando Zerboni , professor at IAE,asked an unexpected question: “Who survives an accident? Zerboni believes the digital marketing industry today is  in ” an accident situation. A violent changethat makes us think differently.” Based on this, he suggested thinking outside the current measurement paradigms and marketing practices.

Along the  same line, Alejandro Zuzenberg, General Manager South Cone for Facebook , claimed that we must think of the Internet not as “interconnected computers but as a mobile network of people,” emphasizing not only the passage from computers to people, but also PC to mobile as two significant changes to digital in recent times.

“There is a measurement problem in that users are measured but not people,” said Zuzenberg. According to the executive, this same issue led Facebook to think ways on how to measure noy users but people’s interaction on multiple screens: “To measurement data, I am 7 different users simultaneously if I open Facebook in different devices.”

Eddie Parker, director of business and planning for MindShare, said on his talk that it is key to detect real-time conversations and react to this: “reach people with the right content, at the right time.” For the executive, the keys to the “future” marketing are: take into account technological developments, culture and the speed at which the current world moves.”

Armando Rodriguez, VP of Yahoo! for LatAm and the US Hispanic market, also stressed the importance of the production of specific and personalized content. “The content marketing industry should move towards providing relevant content for the user.” For the Yahoo executive it is essential to think of the different media platforms in a unified way.

Traditional TV and its’ future in LatAm

Iab Now closing panel gathered executives of some of the largest media companies  in Argentina including AGEA, La Nación and Telefé (Artear).

The panel discussed how traditional media has had to adapt to the fast changes and to start thinking on multi-screen content. The executives agreed on the need to adapt to current times, for which it does not help to think in terms of general content but to “think in terms of specific content for each platform” as Darío Gallo, editor of Clarín (AGEA) indicated. To Adrián Suar, Programming Director of El Trece & Partner & Founder of programming house Pol-Kam content should be adapted to the various media platforms. Ernesto Martelli, marketing manager of La Nacion, said “it is no longer about creating content but generating experiences.” Tomás Yankelevich, Artear programming director, noted that although TV is important nowadays we have to “look ahead and create not just television content.” 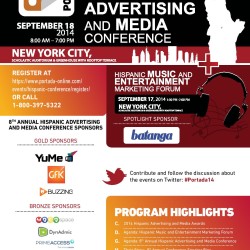 Ale Fishman: IAB & Yahoo! “there is no need to be radical but we should go along with the shift to programmatic buying”