Twitter’s makes less than a third per international user compared to its U.S. user

What: Twitter reported its slowest pace of growth in users in  recent company history. The Q4 2013 earnings result sent the stock tanking this morning on Wall Street. Strikingly the company makes less than a third of revenues per international user vs. U.S. user. 75% of Twitter revenues were mobile.
Why it matters: Twitter’s growth is clearly slowing. The platform needs to find a way to higher user growth. It also needs to find ways to gather more data about its users and make them enticing to advertisers.

Twitter’s ad business is eventually showing some growth, this  is still not enough. CEO Dick Costolo considers the company needs to make itself accessible and useful to the masses. He aims to make the service more welcoming to new users and more “indispensable” to existing ones.

From an international perspective it is interesting to not that while ad revenue per International Timeline views increased $0.36 per thousand (q/q) to $0.60, it still amounts to less than 30% of the same metric for the U.S. (Revenue per U.S. user increased from $2.10 (q/q) to $2.89).

The introduction of “media-forward timelines” last October made Twitter look more like Facebook by producing photos and the first frame of Vine videos to display in users’ streams without requiring them to click a link open.

“We don’t need to change any characteristics of our platform, we simply need to make Twitter a better Twitter,” he said.

“By bringing the content of Twitter forward and pushing the scaffolding of the language of Twitter to the background, we can increase high-quality interactions and make it more likely that new or casual users will find the service as indispensable as our existing core users do,” he added.

Twitter reported revenue of US $242.7 million for the fourth quarter of last year, up 116% from US $112 million over the previous year. Profits were of US$9.8 million.

Twitter’s net loss was US $511.5 million, up from US $8.7 million a year earlier. Net loss widened from a year earlier as it compensate with its sales force, research and marketing. 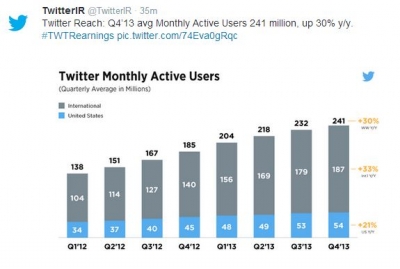 During the first three quarters of 2013 , Twitter’s user numbers grew at 10 percent, 7 percent, and 6 percent respectively. Finally, it came in at 3.8 percent for the final period.

Twitter reported having 241 million monthly active users last quarter, up from the 232 million it had in the third quarter. In the US, it went slightly up from 53 million to 54 million in the three-month period. This means a problem for Twitter, since 73% of its ad revenue comes from the US.

148 billion timeline views, down from 159 billion in the previous quarter showed that user’s engagement had also decreased.

According to Mr. Costolo, the reason for this is users are refreshing their streams less often because of product changes intended to increase engagement with tweets.

In the past year, Twitter has invested in improving its targeting capabilities to show ads that elicit more feedback from users.advertisers have demonstrated to be willing to pay more for better-targeted ads.

Since Twitter has inserted photos into users’ streams the company has promoted its ad business. According to Chief financial officer Mike Gupta, the number of total ad engagements driven primarily by the introduction of media-forward timelines, were up 70% last quarter over the previous one. Ad engagements include favorites, retweet and replies .Advertisers could show higher-impact display ads on Twitter by attaching photos to their promoted tweets.

The company charges advertisers on a per-engagement basis. However, the cost per engagement of ads in Twitter’s auction-based system went down 18% last quarter.