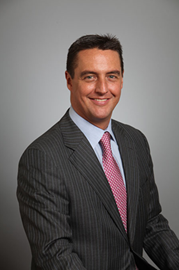 Telemundo Station Group announced today the opening of a new Business Development office in Mexico City. The new unit will support and generate investment from companies in Mexico and Latin America that are seeking to reach the U.S. Hispanic market at both national and local levels.

The office will be led by the newly appointed Vice President of Business Development, Juan Witt (photo), who will report to Tom Arnost, Executive Vice President & Chief Revenue Officer of Telemundo Station Group.

“Juan brings a great wealth of expertise in leading the commercial path from Mexico to the US Hispanic market,” said Arnost. “His proven track-record driving revenue growth and tremendous market credibility make him a great addition to our team as he will play a key role in the continued growth and success of Telemundo Local Media.”

The opening of a business development office in Mexico is an important step for Telemundo to serve local companies seeking opportunities abroad. Mexico has the second-largest economy in Latin America and is expected to become the world’s tenth-largest economy by 2030. As it continues to grow, it will seek to expand into new markets, including the $1 Trillion U.S. Hispanic market.

Witt is a seasoned media expert with more than 14 years of experience, nine of which have been dedicated to the generation of business from Mexico towards the U.S. Hispanic market. Witt joins Telemundo Station Group from Univision Communications, where he held various positions including Senior Vice President, New Business Mexico, since 2004. During his tenure at Univision, Witt led the commercial path of clients from Mexico into the U.S. Hispanic market by developing cross platform sales that represent all of the company’s properties, and by handling integrated packages for TV, Radio, Online, Mobile and NFL Latino Mexico.

From 2003-2004, Witt was General Manager of Medios Urbanos / Urban Media, an advertising group that won a Government concession for the placement of outdoor media in Mexico City’s public bus transportation system (RTP). In that capacity, Witt led the team and supervised the management of all departments, from sales and finance, to co-ops and strategic alliances. From 2000-2003, Witt served as Advertising and Sales executive of Turner Broadcasting International in Mexico City, where he was responsible for cable and online advertising sales for CNN, TNT and Cartoon Network. He also worked in the finance industry, where he held various positions at BBVA, Société Générale and Bank Boston.

Witt holds a degree in Business Administration from the Universidad Iberoamericana in Mexico City.