What: Enlace Extra, The San Diego Union Tribune’s (U-T)  product for the Tijuana and Mexicali markets,  will now be featured as the U-T’s primary ad buy option for distribution in Mexico.
Why it matters: The company will be working with new vendors Global News Distribution and Logistik Distribution CO. to increase visibility and reliability of Enlace Extra distribution. The announcement comes a few weeks after Hoy Fin de Semana communicated that it is partnering with La Bolsa Azul for distribution in Mexicali and Tijuana. The San Diego Union Tribune had historically partnered with La Bolsa Azul. 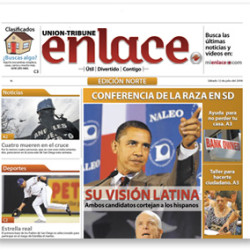 U-T San Diego has announced that Enlace Extra will be the U-T’s main product for the Tijuana and Mexicali markets.. Enlace Extra is an editorial  extension of Spanish language publication Enlace,  which is mostly distributed in San Diego/Southern California.

Enlace has been an integral part of the U-T’s regional strategy of expanding its reach on both sides of the border, and Enlace Extra has been the publication into which preprints have been inserted for distribution in Mexico for the past five years.

Global News specializes in the daily and weekly distribution of all publications from newspapers to magazines and books. This company is owned and operated by Tijuana resident Andres de la Parra. Global News Distribution has distribution in cities like Baja California cities of Tijuana, Rosarito, Ensenada and many others.

Logistik Distribution Co.  will handle all secured trans-border delivery efforts including home delivery in Mexicali.The company is owned and operated by Yuma Arizona native Danny Katsurayama. His specialty is in local home distribution of both paid and non-subscriber products. He and his team were the founding distributors of the Union Tribune ‘s Vida Latina entertainment magazine Additionally, this team handles UT´s Enlace Spanish language newspaper in Riverside county as well as several other English language entertainment and real estate publications.
The U-T’s distribution scope in Mexico will remain the same, with 100,000 affluent households in Tijuana and 30,000 affluent households in Mexicali.  Enlace, which is published in San Diego ,has a distribution of 176,496 copies including  SW Riverside circulation,with 63,514 Home-delivery.

¨The UT is continuing, without interruption, the delivery of both news and information as well as valuable advertiser messaging through in-paper and preprints. The color of the bag may be changing but the content and value are not just remaining constant – they’re increasing, ¨  says UT San Diego Chief Revenue Officer Joe Brenneman.

U-T has also announced enhancements with its new vendor expecting to increase the visibility and reliability of Enlace Extra distribution by utilizing a state of the art tracking system and notarized verification of deliveries in randomly sampled areas.The company has already decided that Enlace Extra  will be delivered through doorstep,that is 100% home delivery.

“Our commitment to our advertisers has been, and will continue to be, to provide reliable, verified distribution throughout the entire mega-region—San Diego and Northern Baja,” added Brenneman. “We are honored and excited to continue to service our advertising partners with this ad buy option in a border region where our presence, knowledge and capabilities are second to none.”