What: The online advertising solutions company Vizury has raised US $16 million investment in a round led by Intel Capital with participation from Ascent Capital and existing investors Nokia Growth Partners and Inventus Capital Partners.
Why it matters: The company is planning to use the investment raised for research and development and also to expand its operations in China, Japan, Latin America, Middle East and Korea.

Vizury,an online advertising solutions company, has raised US $16 million investment in a round led by Intel Capital with participation from Ascent Capital and existing investors Nokia Growth Partners and Inventus Capital Partners.

The company will use the investment for research and development as well as expanding its operations in China, Japan, Latin America, Middle East and Korea.

Vizury  raised US$9 million from Nokia Growth Partners (NGP), Ojas Ventures and Inventus Capital Partners in October 2012 and US $2 million from Series A funding in February 2011. At present, the company has connections with various ad networks and publishers including global partners like Facebook Exchange, OpenX, Microsoft Advertising, Ybrant Digital, Pubmatic and local inventory partners like Tencent, Zedo, Baidu, AdFunnel and others.

Vizury is among a bunch of fast growing Indian adtech companies that are beginning to take on global rivals including Google.It runs campaigns for customers in 27 different countries including Myntra, MakeMyTrip, HomeShop18, Lenovo, Sony, Jet Airways, Agoda, Jabong, Zalora and Expedia among others.

“The funds will be used to drive product innovation on our mobile and cross-channel propositions and to scale operations in existing markets, especially in China, Japan, LATAM, Middle East and Korea. We are also evaluating our options of entering the US market,”Chetan Kulkarni, Vizury co-founder and CEO said .

Online advertising continues to grow and the emphasis is placed on making ads match better with people who will be most receptive to them. 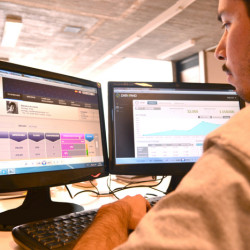