AD-Tech New York, one of the most important events for digital marketers, concluded yesterday in New York City’s Jacob Javits Center. The event had a sizable number of Hispanic and Latin American oriented companies among exhibitors and attendees.They included…

Among the more than 200 exhibitors at AD:Tech New York there were a good number of companies that are very active in the U.S. Hispanic and Latin American sector. They include Batanga Media, digital media trading desk Headway Digital, LatinPak, Adnetwork.net, the performance advertising oriented network owned by IMS, Harrenmedia, mobile ad – network StartMeApp  and ad-trading desk Zetanet. Listen Up Español was another Ad-Tech exhibitor. The Hispanic specialized Direct response call center is introducing a digital marketing unit to help clients integrate Hispanic Internet Services into their Telemarketing services, Randall Anderson, COO at Listen Up Listen Up Español told  Portada.

The U.S. Hispanic market and Latin America were also represented in Ad:Tech New York’s conference agenda. Martin Enriquez, CEO & Founder of Social Metrix, Matias Perel, Founder of Latin3, Rudina Seseir, partner, Fairhaven Capital and Sederrick Raphiel, Principal & Creative Director at The Design Factory, participated in a lively keynote panel on the state of multicultural marketing within digital advertising. Matias Perel of Latin3 used the analogy of “two worlds” as he played a video from Univision highlighting the dual nature of many Latin Americans today. They may be into futbol as much as football; they may like cheeseburgers as much as carne asada. This demographic may baffle marketers because of the complexities involved, but the video mentioned a very important point: Latinos make up the fastest growing segment of young people in the US.

50 % of our Nespresso capsules are sold online.

In another keynote Peter Blackshaw, Global Head of Digital Marketing at Nestle, explained that Nestle has made a lot of progress in the digital and social media realm since he came on board two years ago. “Nestle sells 1.2 billion products every day across the globe, and a growing percentage of our brands are supported by digital initiatives, such as QR for greater detail about the product,” he said. “We produce about 1,500 pieces of original content a day on Facebook alone, and 50 percent of our Nespresso capsules are sold online. Our brands have a total of 180 million fans on Facebook, and that’s growing 5 to 7 percent per month.” . 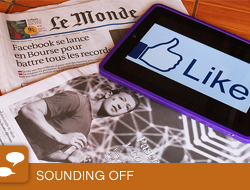