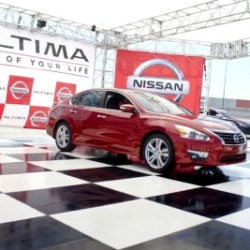 Good things come in shiny packages, and Ride of Your Life, Nissan’s multi-channel campaign to launch the 2015 Altima is a prime example. A group of consumers were invited to a shopping mall and presented with a large Smart Glass box. Smart Glass goes from clear to opaque, allowing Nissan to show exciting video footage before revealing the actual car inside the box. Some consumers were then carried to a nearby race track to experience high-speed demonstration rides. It’s a retread of last year’s popular campaign that highlighted the car’s performance.

A video on Nissan’s YouTube channel shows the in-mall event. Along with the full video, the campaign includes :30 and :15 national and cable broadcast spots, plus a range of digital executions, as well as Hispanic versions; it also includes point-of-purchase materials such as a hanging hood sign and race car wraps. The actual Smart Glass box will live on as part of the Universal Nissan attraction in Orlando.
[youtube https://www.youtube.com/watch?v=YLJ0TwlKp4o&w=560&h=315]

Austin-based agencies GSD&M and LatinWorks joined forces to create Sibling, a new multicultural shop integrating creative and media. Sibling aims to target Hispanic millennials with what it says is “a new strategic model for reaching the ever-evolving mainstream.” The agency will operate out of Austin with creative development led by Executive Creative Director Rafael Serrano will lead Sibling’s creative team, while Alejandro Ruelas, cofounder of LatinWorks, and GSD&M CEO Duff Stewart will provide leadership support and guidance. Sibling will launch with blue-chip clients including Popeyes Louisiana Kitchen and Southwest Airlines.

With six out of 10 U.S. Hispanics either bi-lingual or English-speaking, it’s not surprising that audiences for news programs on Univision, as well as for Spanish-language daily newspapers, dropped in 2014. Pew’s latest Hispanic Media Fact Sheet shows that it’s not simply a case of Hispanic consumers migrating to mainstream media. Telemundo’s evening news viewership rose last year, while total circulation for a group of 31 weekly newspapers also grew. Overall, the report, which is chock full of interesting stats, shows Hispanic media in a holding pattern – and falling behind growth in general-market media.

Good news for Hispanic media comes from AHAA, which had its Annual Conference last week, which found that the top 500 US marketers have grown their spending on these media. They’re now dedicating 8.4 percent of their total spending to Hispanic media, up from 5.5 percent in 2010.Okay, that’s not a huge jump, and it’s far from keeping pace with the growth of the overall Hispanic population in the U.S., but that amounts to a total spend of $7.1 billion, up from $4.3 billion in 2010.

Sprint is one major advertiser putting its money on Hispanics, with the creation of a new business unit focused on wooing this demographic. Sans a groovy and/or Spanglish moniker for the new unit, it will be led by Robert Solé, formerly CMO of TIM Brasil. Solé’s brief will be to develop new products and services to create a differentiated offering for this market. He also becomes president of Sprint Puerto Rico, which will be the hub of the telco’s Latin efforts.
[Ctahcb]