It’s all about the content, baby, as Hispanic characters begin to permeate TV and video. It’s a good thing, because Latino consumers are feeling spendy, especially when it comes to guacamole.

NASCAR Productions’ Entertainment and Marketing division has partnered with telenovela star William Levy and Gladys Gonzalez to produce a still-untitled, non-scripted show about Hispanic race-car drivers trying to make it in NASCAR. Deadline Hollywood reports that they plan to pitch the show to networks next month.

Hispanic Consumers in the Mood to Spend

An annual consumer survey by Florida Atlantic University found that the majority in South Florida expects the economy to continue to improve over the next five years. Latinas were most optimistic, while lower-income Hispanics there had gloomier expectations of the economy than Hispanics nation-wide. Meanwhile, on the national level, the Haas Avocado Board is counting on Latinos (and everyone else) to eat mucho aguacate in the week leading up to the Super Bowl. They’re talking 120 million pounds of avocados!

You know how Millennials are so crafty? When they’re not buzzing the neighbors with their home-made drones, they’re crocheting hats to sell on Etsy. To address what Time Inc. calls “the Maker Generation,” the publishing conglomerate combined content aggregated from various pubs with native ad content to create The Snug, according to Folio. Ikea is the exclusive launch partner for the first six months. Time says this is the first of several planned “social hubs.”

Don’t Count Your Hispanics before They Come

Yes, the U.S. Hispanic population still will see healthy growth, but marketers should expect 30 million less of them by 2050 than was expected. The latest U.S. Census Bureau population projections cut the expected growth in Latin immigrants from 91 percent to 57 percent, while more of the population growth will come from Hispanic births in-country. That new growth projection is still healthy as heck – but Pew Research Center points out that societal changes in the United States, such as inter-marriage among ethnicities, could change the nation’s ethnic makeup in ways still to be determined.

KollideTV Wants Latino Viewers to Get Some

The third season of web series from KollideTV includes the Latino comedy Get Some, as well as a mini-documentary series on race in America called Afraid of the Dark. The over-the-top network is serving an extra helping of diversity this season, in line with its motto of “where content meets culture.” In addition to GetSome, which focuses on a Nuyorican couple trying to keep their marriage spicy, the roster of shows includes a second season of the LGBT drama, In Between Men. The network aims to find and develop quality curated original content for African American, Hispanic, Asian and LGBT viewers across online, mobile, social and over-the-top platforms. 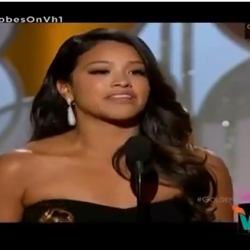 Golden Globe Win Is for All Hispanics

Gina Rodriguez won a Golden Globe for Best Actress/TV Musical or Comedy for her eponymous role in Jane the Virgin – and her acceptance speech fired up the Latino community as it emphasized how the culture is becoming more mainstream. She said, “This award is so much more than myself … It represents a culture that wants to see itself as heroes,” according to NBC News.