We just added more major client and and agency executives to the roster of #Portada14: The Hispanic Music and Entertainment Marketing Forum on Sept. 17 and our 8th Annual Hispanic Advertising and Media Conference on Sept 18. Alfredo Rodriguez, Vice President of Latino Marketing at DISH and Karina Dobarro, VP, Managing Director, Multicultural Brand Strategy at Horizon Media are the lastest additions.

Get your tickets now! Early Bird pricing expires next week!

Other major speakers that have already been confirmed include:

The 2014 World Cup is over, but Soccer Marketing is definitely not. In the below interview, Alfredo Rodriguez, Vice President of Latino Marketing at DISH describes  the Direct-based-Broadcast-Satellite Provider’s “Juego Bonito” campaign and explains how  the Hispanic themed campaign was “crossed-over” to a Total Market effort. Plus how he measures the efficiency of online video advertising.

To reach a nationwide audience during this summer’s global soccer tournament, DISH collaborated with Google to develop a first of its kind presentation of “El Juego Bonito (the beautiful game)” across the web, including the first ever Spanish language masthead sponsorship in the U.S. on YouTube’s desktop and mobile sites (Dish.com/Brazil, or Dishlatino.com/Copa-Mundial). It began as a campaign for the DishLATINO brand that targeted the Hispanic market. Given the success of Juego Bonito in the Hispanic market, DISH launched in a crossover campaign and released the ads to the general market, including TV spots and innovative digital tactics. Below more insights and details from Alfredo Rodriguez, Vice President of Latino Marketing at DISH.

Portada: Which is Dish Latino”s Media Agency for the U.S. Hispanic Market, is it the same as for the general market? “Alfredo Rodriguez, Vice President of Latino Marketing at DISH.: DishLATINO has a dedicated team, which focuses on brand marketing, as well as the retention and acquisition activities of DishLATINO customers, partnering closely with MARCA and Havas on campaign creative. For the Juego Bonito campaign specifically, we worked closely with Havas Chicago.”

What media are being used to have users go to Dish You Tube Channels and online video offerings. E.g. in what other properties than YouTube are the “Jogo Bonito” videos being shown/ has online video advertising been bought?

Alfredo Rodriguez, Vice President of Latino Marketing at DISH.: “Throughout the campaign we incorporated innovative tactics, including custom rich media executions, interactive pre-roll on YouTube and MSN, homepage takeovers on YouTube’s desktop and mobile sites, and hashtag targeting. We bolstered video with Rich Ads in Search (RAIS) and placements, which serve a video that can be played by the user within their search results. We also sponsored the Univision “Mas Impactante (Most Shocking)” website, which is driving high interaction rates.

–       In the general market, DISH worked closely with Google to develop an innovative takeover of “Juego Bonito (the beautiful game)” across the web. Using a combination of search and video ads, DISH targeted fans searching for soccer on Google or watching a related video. Additionally, DISH placed the spots on late night television shows like The Colbert Report and The Daily Show with Jon Stewart. Finally, on Monday, June 16, we had a static takeover of the NASDAQ Tower screen in Times Square featuring a live social feed, and on Wednesday, June 18, our DISH Anywhere Juego Bonito spot ran 4 times each hour all day on the Tower.”

Is there any follow-up involved with this campaign after the World Cup.
A.R..: “The samba dancer is a metaphor for “Juego Bonito (the beautiful game),” making this campaign truly built for soccer fans and all the excitement leading up to the tournament. So while you won’t likely see much more of “Juego Bonito” after the soccer tournament, we believe that success stems from innovation—from our programming, to our advertising, to our technology—and we are always looking for ways to synergize across the brand. Stay tuned for the next big campaign from DISH and DishLATINO!”

What exactly is a Spanish language “masthead sponsorship” in the U.S. on YouTube’s desktop and mobile sites.
A.R..:  “DISH worked closely with Google to feature the first ever Spanish language custom masthead at the top of the YouTube mobile and desktop website on Tuesday, June 17 and Wednesday, June 18. The custom masthead is an in-page unit running the full width of the YouTube homepage below the navigation bar, and included the Juego Bonito teaser video and links to the DISH and DishLATINO YouTube pages. See attached (Juego Bonito YouTube Masthead Takeover 06-18-2014) for a screen shot of what the masthead looked like to desktop users on Wednesday.”

Can you detail how you implement the cross over campaign or is it just to turn it to the English-language?

A.R..:  “The “Juego Bonito” campaign produced great results in the Hispanic market, so DISH decided to maintain the 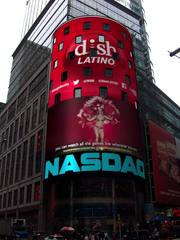 same theme and messaging in the general market crossover campaign. With that in mind, DISH made small tweaks to the creative and adjusted the subtitles to English, while keeping the focus of the videos on the award-winning features of the Hopper, including MultiView, an application that allows our subscribers to watch up to five views of the tournament games on Univision; Picture in Picture (watching two games at the same time); and DISH Anywhere, which gives DISH subscribers the power to watch all 64 games while away from home, where they have access to an internet connection.DISH also incorporated unique media buying strategies when bringing the campaign to general market, including placement of the spots on late night television shows, a takeover of the NASDAQ Tower in Times Square, and our partnership with Google for the first-ever Spanish language masthead on YouTube’s U.S. mobile and desktop sites. These tactics bolstered the results of the DishLATINO campaign, increasing our reach and driving awareness about DISH products, as well as engagement with the brand.”

What are the results Dish expects in terms of actual new subscribers throughout the campaign?

A.R..:   “We can’t go into specifics when it comes to sales expectations, but we are thrilled by the engagement and increased call volume we have received in correlation with the campaign.”

A.R..: How is the efficiency of online video advertising measured at Dish?

“The goal of this campaign was to drive engagement with the brand and awareness of the unique benefits of the Hopper, including MultiView, Picture in Picture, and DISH Anywhere. So far, we have seen great response to the videos and high levels engagement driven by “Juego Bonito.” Since its launch, some of the milestone results include:

o   Other milestone results include:

This is the fourth of a series of articles about how Fortune 500 companies are leveraging the World Cup in their Marketing Campaigns. The first article was How Chevy leverages Soccer Passion for its new Hispanic campaign, the second World Cup Marketing: How Allstate enables Fans to send “Mala Suerte” to rival Teams and the third An in-depth Look into the Marines World Cup digital Outreach targeting Multicultural Millennials.

DISH has selected Havas Worldwide as its new digital agency of record to support its general market and Latino digital marketing needs. Dish Latino digital needs were previously handled by Miami based agency Media 8. Offline Hispanic marketing  will continue to be done by Hispanic Group  also out of Miami.

DISH Latino, the Hispanic-targeted offer by Dish Network, has been growing steadily in the past few years, growing its advertising and marketing spend “substantially, in double digits,” Alfredo Rodriguez, VP of marketing at DISH, told Portada in an interview last year.

Dish Latino was the ninth largest Hispanic market advertiser in 2012, according to data from Kantar Media with an overall advertising expenditure of US $87.5 million.

“As DISH continues to grow its brand in an ever-evolving digital landscape it is important we have the best advisors to move the company forward,” said Nyhouse. “We found that in Havas WW and are excited to work with them to continue building DISH’s business.”