AT&T is rolling out a series of TV ads featuring actress Sofia Vergara and Univision sportscaster Fernando Fiore.One spot has been titled ‘Golazo’ (Super Goal) and will air in the form of 15-second and 30-second TV ads, features both TV personalities in a living room watching soccer. The ad shows Fernando and Sofia cheering their favorite team after a goal is scored, and then a reference is made to AT&T’s 4G LTE network.
http://www.youtube.com/watch?v=SL20VkDpUaM#t=8
Another similar 15-second spot titled  ‘Mas Confiable’ (Most Reliable) will air from Feb. 3 through the end of the month. Directed by Michael Spiller, these TV spots will bring the chemistry this duo had in the 90s to the screen.The spots were carried out by AT&T in collaboration with BRAVO and Lookout Entertainment director Michael Spiller. 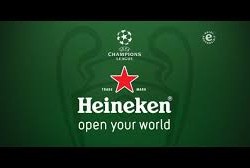 Heineken and the UEFA Champions League (UCL) are once again bringing the popular soccer club competition to fans in the United States through various retail elements, from March 1 through May 24.Coinciding with this year’s program launch, Heineken is rolling out a new 16-ounce, three-pack format, designed with permanent UCL creative. Also, at retail, interactive displays and point-of-sale will direct consumers to sign into the UCL mobile site where they can try to digitally match their “Half Ticket” for the chance to win Heineken UCL prizes, such as Adidas-branded merchandise and signed UCL memorabilia. Consumers can also login with Foursquare to earn points every time they “check in” at retail. Additionally, program participants will be automatically entered into a sweepstakes for the chance to win a trip to a UCL match during the 2014-2015 season. Channel-specific cross-merchandising offers on the purchase of relevant items, including salty snacks, meats and ice, will round out the program and provide shoppers with solutions for their at-home viewing occasions, according to the company.”The UEFA Champions League is a proven passion point of Hispanic consumers,” said Belen Pamukoff, brand director for Heineken.”

PayNearMe is growing its reach with a deal to bring its cash transaction network to more than 8,000 Family Dollar locations across the United States.The deal almost doubles PayNearMe’s footprint. Its cash transaction network allows consumers to use cash to repay loans, pay rent, make online purchases, and much more. Consumers can make payments 24/7 in their own neighborhood any of the 17,000 participating 7-Eleven, Family Dollar, and ACE Cash Express stores across the United States.PayNearMe has also closed a $20-million round of financing led by GSV Capital. August Capital, Khosla Ventures, Maveron and True Ventures also participated in the round. PayNearMe will use the funds to continue expansion into existing categories while launching into new vertical markets.