The Chelsea Premier League Football Club from England is making significant efforts to grow the sport of soccer in the United States and engage young players in new and exciting ways. Chelsea is one of an array of  European clubs (e.g. Bayern Munich, Barcelona) that are investing in their U.S. expansion. 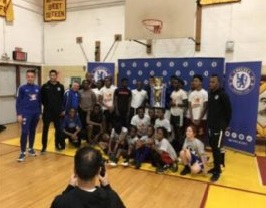 On Tuesday, November 28th, the Chelsea Premier League Football Club from England made their way to the Frederick Douglass Academy for grades 6-12 in Harlem. Their goal was simple: Promote soccer in the United States and engage young players in new and exciting ways. But, the trip had an even bigger unveiling. The Club was breaking ground on a brand-new, multi-million dollar covered outdoor soccer facility for the youth players of Harlem. On top of that, the day would include appearances from Chelsea FC legends Ashley Cole and Michael Essien. The state of the art facility, due to be completed in Fall 2018, would host a variety of soccer programs for many different ages of players. Once construction is complete, thousands of young soccer players in the greater Harlem area will be able to play soccer year round.

When asked about the long-term goals of the programs and new facility, Ian Woodroffe, the Head of International Coaching Development for Chelsea FC, had this to say:

“Taking kids and giving them additional enrichment and opportunities to aspire to be better citizens and go on to bigger and better things. Some will get scholarships, and are looking to develop as players. But, it’s also about getting ready for adult life and giving them the skills and additional support beyond the program. That’s why FC Harlem has been doing well for a number of years, and we wanted to continue that support.”

It is clear that Chelsea FC is making significant efforts to grow the sport of soccer in the United States. By their investment in youth soccer in Harlem, they are laying the foundation for future years of success and growth for the community. In the end, Chelsea is also going to see a large following coming from the Harlem area and beyond thanks to the new facility and its programs.

It was exciting to see two of the best Premier League players of their time in person. Once they entered the gym, there was a new buzz and sense of energy. Almost immediately, the students at the academy starting running drills with Chelsea staff along with Cole and Essien. For the next 30 minutes, the gym became a flurry of different moves and soccer balls skidding along the floor.

FC investment in youth soccer in Harlem, is laying the foundation for future years of success and growth for the community.

The entire event was a blast for everyone involved. There were various media outlets scattered throughout the gym filming the session. The kids were playing with two of the most accomplished premier league players in the last 25 years, and their excitement showed that. I was able to capture some great clips of Ashley Cole performing moves that looked like magic tricks.

Once the training session was over, the kids, staff, and players talked for a bit and then took pictures with the 2016/2017 Premier League Trophy Chelsea won last season. After that, the Chelsea staff, media, and the group traveled to the site of the future soccer facility just a few minutes away. Once we arrived, we walked down onto the site and had another opportunity to take more pictures with the players, staff, and trophy.