Alexandre Jordao has been named to the newly created position of Chief Revenue Officer, Batanga Media. Jordao will be relocating from Sao Paulo (Brazil) to Miami.

iWedia, a provider of software solutions for TV devices to service operators and Consumer Electronics manufacturers, has announced the appointment of Claudio Lessa as Director of Business Development Americas to drive the growth of the company in the Latin America region. Located in Sao Paulo, Brazil, Claudio Lessa has accumulated 15+ years experience providing software solutions and associated services to the LATAM digital TV market. More recently, he led the initiative of Brazilian ISP Arganet in their digitization in ISDB-Tb (Brazilian Digital Television System), and advised a group of ISPs in Brazil.

Young & Rubicam Argentina has appointed Pablo Maldonado and Ezequiel Orlandi to become the new creative duo. They’ve both worked for agencies like Publicis, JWT, Lowe, DDB Mexico, Grupo Gallegos and LatinWorks, where they carried out projects for brands such as Heineken, Ford, Nestle, HSBC, Got milk ?, Reebok, Unilever, Bud Light and Carrefour, among others.

Nestor Leal has been appointed managing director for iCrossing Chile.The executive joins the team to position the agency as a leader in delivering meaningful user experiences and measurable business results. iCrossing has global clients such as Coca-Cola, Kellogg’s, LG, BMW, DirectTV and Avon, among others. Leal was Interactive digital director at BBDO Chile for four years.

Prior to being promoted to Vice President, Victoria Cole served as General Accounts Director of the agency.

Emiliano Galván returns to Wunderman after having worked at Mercado Libre, where he served as Manager of Corporate Marketing.

In the past two years , Luciano Landajo served as Director of Circus and previously, he worked for agencies like Madre, Ponce and Santo Buenos Aires.

Isobar Brazil has announced the appointment of Alexandre Santos as vice president of technology and operations. Santos had been part of Isobar, serving as technology & project manager. Santos will work for a portfolio that includes clients like SKY, Fiat, Jeep, Whirlpool and Nivea, among others. In his new role, he will report to directly to Chueri.

Diego Livachoff is the new creative vice president of J. Walter Thompson Peru. Based in Buenos Aires, Livachoff was serving as DC for McCann’s regional hub.

What: Multicultural and Latin American digital publisher Batanga Media named Guillermo Abud as Head of Global Business & Programmatic and Alexandre Jordao as CRO. Both are newly created positions.
Why it Matters: The appointments of the two executives support the company’s growth and expanding client demand. They also reflect Batanga’s strategy of developing branded content programs and programmatic partnerships.

Multicultural and Latin American digital publisher Batanga Media announced the appointment of two executives in order to support the company’s growth and expanding client demand: Guillermo Abud and Alexandre Jordao.
By hiring Guillermo Abud as Head of Global Business & Programmatic, and until recently VP Digital Director, Mediavest 42°, Batanga Media taps into a seasoned executive with strong brand and agency contacts. Abud tells Portada that in “the past nine years at Starcom Mediavest Group in Latin America and U.S. Multicultural, I’ve gained extensive experience building strategies, planning and buying, as well as developing partnerships alongside some of the most talented professionals in the industry. Most recently, at the helm of the creation and implementation of a very unique Multicultural programmatic solution built on talent, content/inventory and data, I believe that I can play a key role providing Batanga Media’s clients with valuable expertise and partnership.”
One area Abud will concentrate on is the development of programmatic trading partnerships. Abud notes that “Batanga Media is already conducting business with the main agencies and advertisers in the U.S. and Latin America, but I think that the main programmatic opportunities lie within Batanga Media’s 1st Party Premium Data, Native and branded content capabilities. It’s well known that it’s hard to find premium/high quality Hispanic and Latin American video, that’s why I think that Batanga is unique since we have the ability to create unique Data deals, marry it with great custom content -Text, Video or Native- to then promote it within our O&O properties or even extend buys across the web delivering results.”

Growth Opportunities in Video and Native

Abud sees the largest opportunities in the growth of Video and Native. “Video and Native are the main growth areas in Latin America and for the U.S. Hispanic markets, however Native is an untapped opportunity that only few can leverage. Batanga Media’s owned and operated properties have 95 million users, that’s a lot of eyeballs that are interesting to most agencies and advertisers. In addition, Batanga Media’s amazing content production capabilities can be applied to programmatic.”

Video and Native are an untapped Opportunity that only few can leverage.

Alexandre Jordao has been named to the newly created position of Chief Revenue Officer, Batanga Media. “I will be based in Miami, overseeing all of our clients, including Brazil, Argentina, Mexico, Pan Regional and U.S. clients. We have a sales director or VP of sales in each of these markets that will report directly into me”, Jordao tells Portada. Previously, Jordao was Vice President of Sales for Latin America and Brazil at Batanga Media, based out of Sao Paulo. Guillermo Abud will report to Jordao. 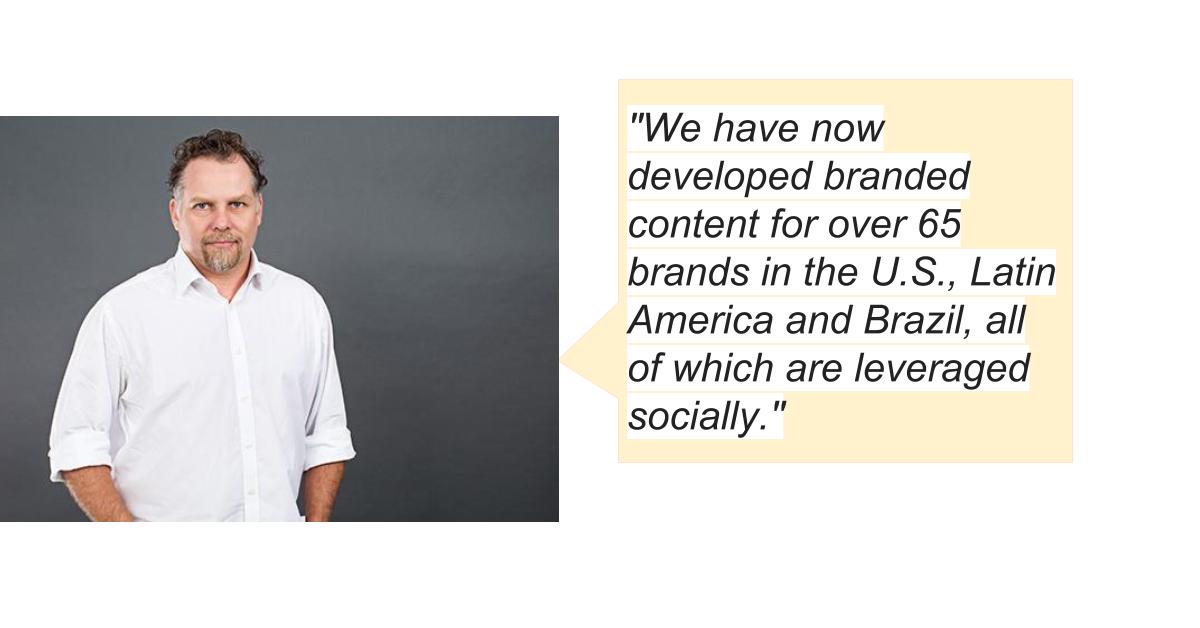 An important focus area for Jordao will be the development of branded content partnership. He notes that ” since 2015 we have developed branded content for over 65 brands in the U.S., Latin America and Brazil, all of which are leveraged socially. In Latin America we have developed branded campaigns for brands such as Mac and L’Oréal cosmetics, Citi Cards, Nesquik, Samsung and Glade, among others. In the U.S. we have worked with several of the General Mills brands such as Betty Crocker and Pillsbury, Extra Gum, Mazola, Toyota, and Carefree.”

In 2015, Batanga Media’s owned and operated properties, Batanga.com, iMujer.com and BolsadeMulher.com grew over 110%, and now reach over 90 million unique visitors every month. Additionally, the properties’ social media footprint now includes over 26 million fans and subscribers, which consume and share content across platforms such as Facebook, Twitter and You Tube.

Melissa Vogel takes over IBOPE Media Multimedia management for Brazil and Latin America. In this new position, she will be responsible for business strategy, operations, product development and the launch of audio, text and multimedia measurement tools including Target Index.Part of IBOPE Group for 18 years, she was executive director of New Business for the IBOPE Group and general manager of operations for IBOPE Media in Panama. He also managed the operational areas of IBOPE Nielsen Online Brazil (internet), Target Group Index Brazil and Media Mix (Radio and Newspaper). In the last three years, she has held positions in Marketing, being responsible for auditing solutions and advertising investment in , and more recently, for the area management. Melissa has a degree in Radio and Television from the School of Communication and Arts (ECA) of the University of Sao Paulo.

Alexandre Jordao, currently General Manager of Batanga Brazil, will be taking on an expanded role, overseeing all of the company’s Latin American business out of Batanga Media’s Sao Paulo office as EVP/GM of Latin America.

Alterna’TV, a subsidiary of Eutelsat Americas based in Miami, has announced the appointment of Roberto Perez as Senior Director, Marketing and Distribution, for the United States, Canada and Mexico. The announcement was made today by Aymeric Genty, the new CEO of Alterna‘TV.Perez brings nearly a decade of marketing and distribution experience with America’s largest cable and satellite service providers to his new role with Alterna’TV, having worked for DirecTV, Comcast and Cox Communications.As Senior Director, Marketing and Distribution for the U.S., Canada and Mexico, Perez will be responsible for increasing carriage and enhancing market penetration for the suite of channels and networks represented by Alterna’TV in North America and Mexico.Perez joins Alterna’TV after serving as a Retention Consultant for DirecTV in El Segundo, CA. Prior to this, he was Director of Marketing at Comcast, a post he held since 2010. Previously, Perez worked as a Multicultural Marketing Strategist for Cox Communications (2007 to 2010) A graduate of Universidad Católica Andrés Bello (UCAB) in Caracas, Venezuela, Perez earned a Master’s degree in Business Administration from Atlanta’s Oglethorpe University.

Maria Chaparro is the new account executive at Alcance Media Group in Mexico, after having worked with the newspaper El Universal and Grupo Expansion. Chaparro is a graduate of Instituto Tecnologico de Estudios Superiores de Monterrey (TEC) with a focus on digital marketing.

Grupo BT brands + tourism has hired Sonia Guzman as sales director for Latin America. Guzmán will work from Miami offices. BT + tourism brands clients include Condé Nast Traveler for United States and Spain markets, and Financial Times, plus its own set of media including Boletin Turistico publications and platforms, Travelista and Travelers Guide. Recently, it has also incorporated Forbes representation in Mexico , USA and Canada.

Marina Lemos is Brazilian advertising agency David new director of digital integration. Lemos has 14 years of experience in the digital market and worked in agencies like 10 minutos and Ogilvy & Mather. She has held several accounts including Kraft Foods, Coca Cola, Claro, Magazine Luiza, Kimberly & Clark and Motorola, among others.