What: Nielsen has published its yearly Video 360 Report, meant to help marketers and advertisers understand audiences’ motivations and behaviors around today’s dynamic video landscape.
Why it matters: As content options increase, so decreases audience attention. In order to stay relevant, it’s crucial to understand how consumers are viewing film and TV across devices and platforms. 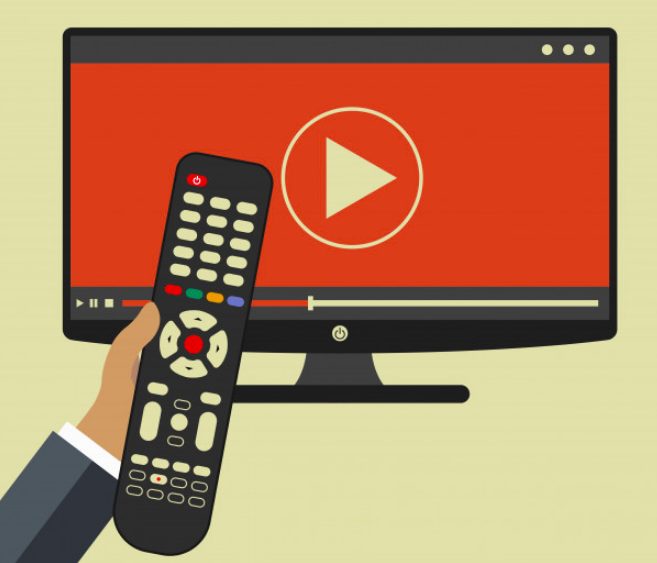 Never before have consumers had the opportunity to choose from such a vast array of content and avenues available. No matter where they go or what time of day it is, viewers have access to video on multiple screens and platforms, which makes it increasingly harder to get (and retain their attention). In order to cultivate loyal viewers, we need to take a great number of insights into account. Which is why Nielsen has designed a comprehensive video report that offers data for entertainment habits and preferences.

As stated in the introduction, “Audience attention is precious and elusive.” The full report shows how consumers are viewing film and TV across physical, digital, rental, purchase and streaming platforms; which devices viewers use to access content, along with when and why they use those devices. Here, we have included the main highlights of the report provided by Nielsen. 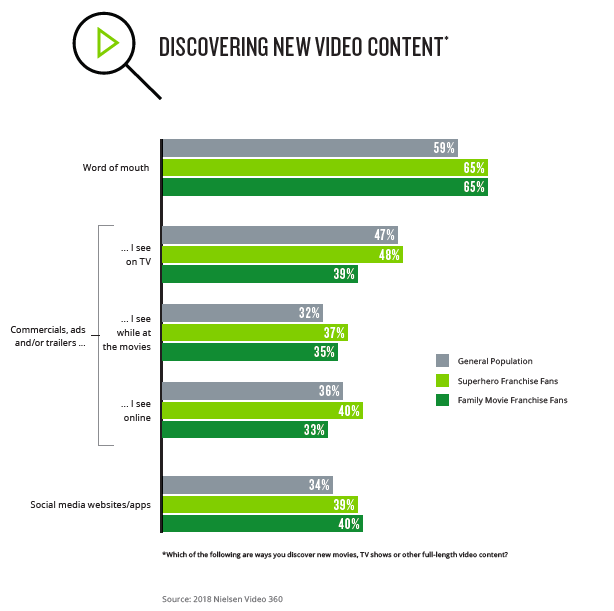 Purchasing: 51% of Population Has Bought Physical Video in the Past Year

This year has seen a slight increase in video purchasing, with 51% of the general population reporting that they’ve bought long-form physical video in the past year, compared to 48% in 2017. Digital download purchases also have gained ground, growing from 35% of the general population in 2016 to 42% in 2018. A growing factor in acquiring long-form video is the desire to build a collection, in either physical or digital format. In 2016 only 23% cited collection building as an important factor in their purchase decisions, compared to 30% who said so this year.

Fans of family movie franchises are heavy purchasers. These fans are also the more dogged in their pursuit of specific titles. When asked what they would do if a piece of content was not available in the formats they wanted, family franchise fans were more likely than other fan groups to seek the title in alternative formats rather than look for another title. 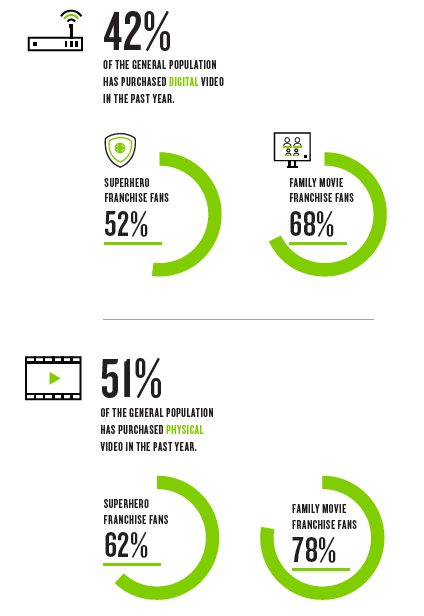 One in four viewers reported downloading or streaming a movie before it was available on DVD or Blu-ray discs. About the same leveraged online platforms to watch movies that were released while still being shown in theaters. Once again, franchise fans outpaced the general population in consuming video content in this manner. Notably, 47%, nearly twice as many family franchise fans as the general population, say they’d downloaded or streamed content before it became available in disc formats. 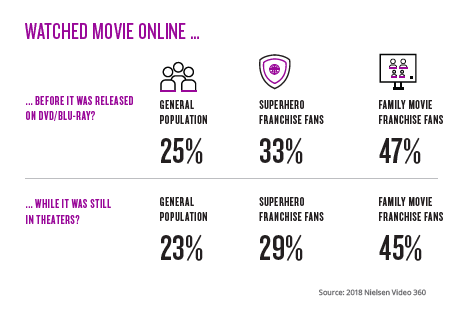 Streaming: 42% of the Population Has Watched Live-Streamed Video

The vast majority of audiences have incorporated online video into their media diet, with eight out of 10 viewers reporting they use an application or service to stream online videos in a typical week. Live streaming, in particular, is becoming increasingly popular, with 42% of the general population reporting that they’ve ever watched live streamed video. The top three content types for live streaming are TV shows, live streams from social media users and regular season sporting events. More than half the general population has watched short-form videos in the past three months. Again, franchise fans are far more active video consumers than the average population. 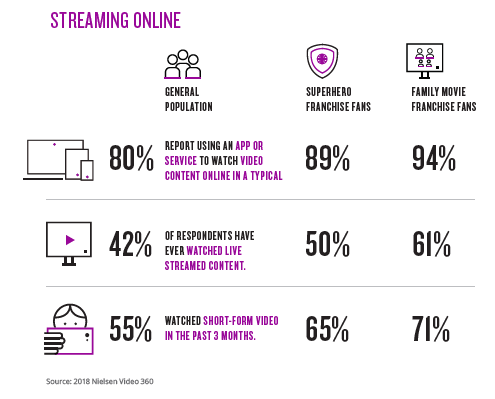