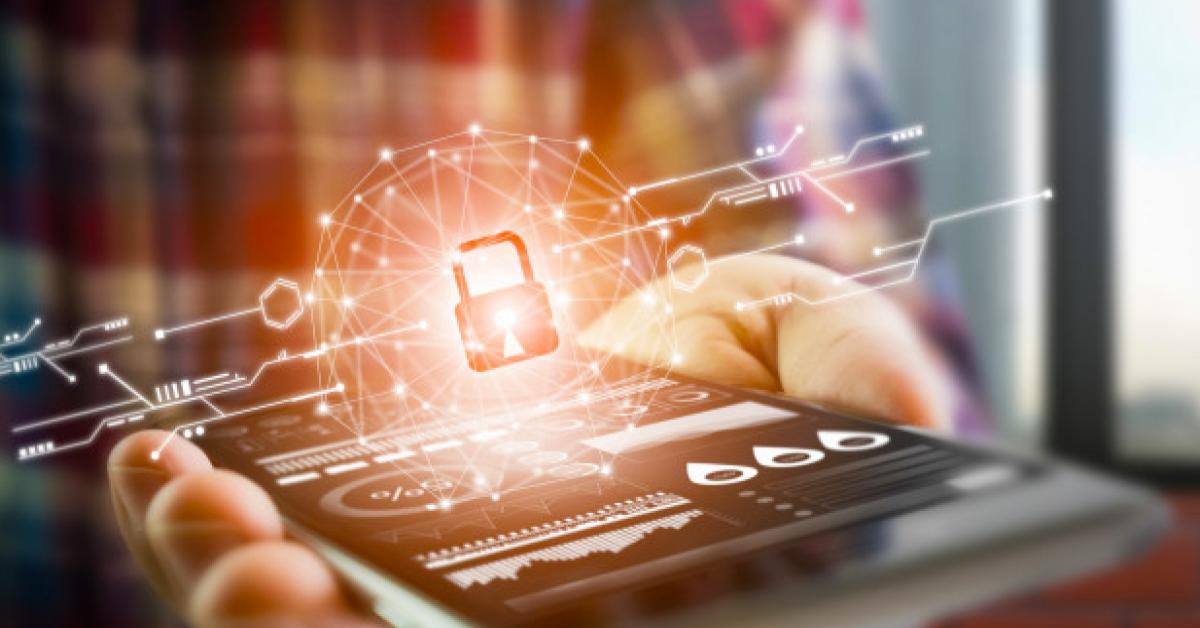 What: Apps are undeniably changing the marketing landscape. Consumers can also choose from a myriad of options, making it difficult for brands to find the right app marketing strategies.
Why it matters: Today’s marketing is all about attracting loyal consumers and building meaningful connections with them. It’ also about finding the right app marketing strategy to be relevant on mobile platforms. Apps can be a shortcut to success. But you have to know how to tackle the challenges. 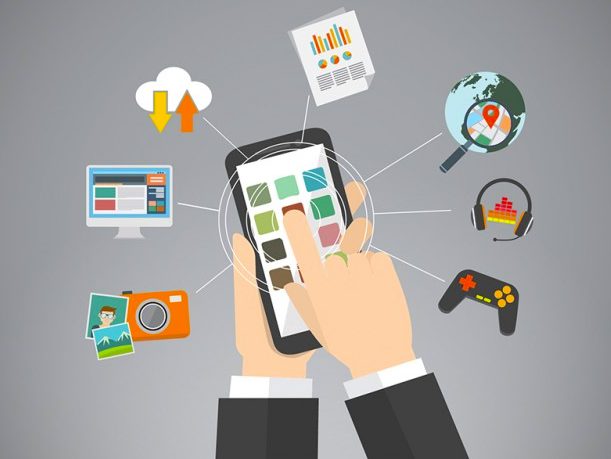 As the world diversifies and gets more complex, the ways and media for doing advertising multiply faster than a mortal marketer can count them.  Today, the average person walks around with the whole world inside a 5-inch screen in the palm of their hand. Their attention span is of no longer than 8 seconds.  But they consume great amounts of content through mobile.

One way for consumers to connect with brands in a practical way is through apps. According to Nielsen, people spend an average of 30 hours per month in them. Easier said than done, though. There are about 3.8 million apps available for Android users (2 million for Apple consumers). However, the app market has the potential to grow to over US $100 billion by 2020. There’s no doubt having an app can get you noticed. It can bring you added success and ROI. But major challenges could make the risk not worth the pain. 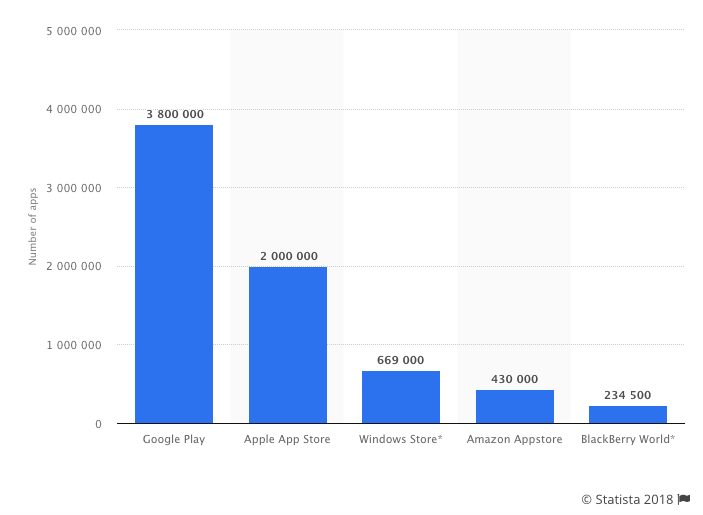 Getting Your App Found is the First (and Easiest) Part 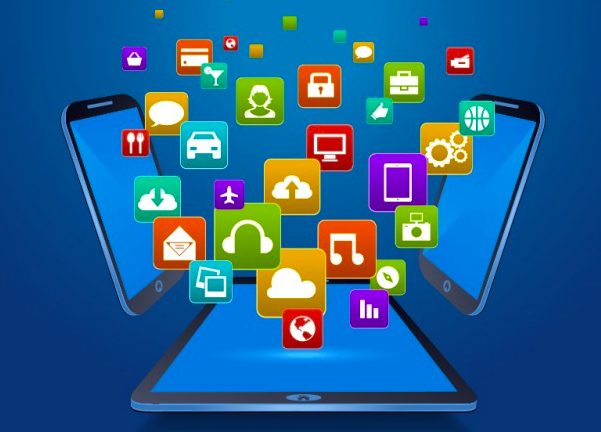 The first step towards a meaningful connection with a potentially loyal consumer is, logically, getting your app installed. This in itself encompasses a big part of app marketing. There are many ways to market an app (just as there are to market everything else). Statistics show all those methods work really well in getting installs. In 2017, there were 197 billion app installs versus 149 billion in 2016. That’s a 50 billion jump in one year. If Statista is projecting right, by 2021 the total app downloads number will jump to a stunning 352 billion.

But how do users even find that many apps to install? According to a 2015 study conducted by Google and Ipsos MediaCT in which 8,470 smartphone-owners had used apps in the previous week, 40% of users browse for apps in app stores. Even though this is true, there is a series of other ways to find out about apps. The easiest one is perhaps a search engine. Especially for local apps, it’s rather easy to get noticed when you provide a service that people are prone to look for. Tech reviews and travel facilities are categories that throw most app results at search-engine users. Also, for this reason, experts recommend search ads as an app-marketing tool. Fifty-percent of people (participants of the Google survey) who downloaded apps said they were prompted to do so by a search ad.

The ways to do this are simple. Competition, however, demands creativity. It won’t matter if you put hundreds of display and video campaigns in place if you don’t offer a unique value to users. As James Tiongson writes, “People turn to apps to ease their daily grind, and they’re more likely to use them if they serve a specific purpose,” and one way to do this is with mobile app install campaigns that allow brands to reach audiences that are looking for an app similar to theirs.

People turn to apps to ease their daily grind, and they’re more likely to use them if they serve a specific purpose. 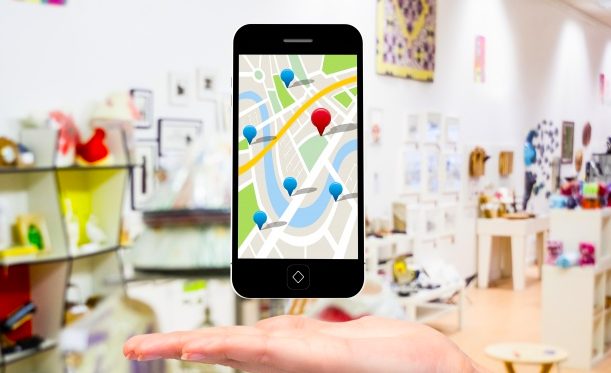 Google’s research revealed that two in three consumers look for apps that simplify their lives, like a retail app that includes sale details and coupons for when shopping in-store. “Brands can avoid getting lost in the app fog if they provide clear value,” adds Tiongson, and they certainly should feel so inclined.

Installs Are Just Like Votes (They’re a One-Time Thing) 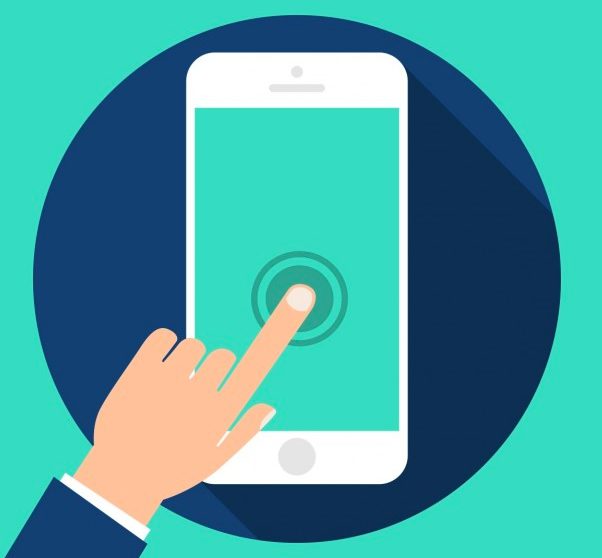 However, the biggest problem with installs, just as it can be done with a Facebook like, is that they can be undone. 38% of users who download an app that will make a purchase easier uninstall the app right after the transaction has been completed. A great number of apps aren’t even used once they’ve been downloaded. Getting an app noticed is only the first step. But even if it is easy to find everywhere, nothing guarantees it’ll be retained, or even launched for the first time.

In order for your app to be installed and launched, it needs to have several elements clear. For example, a good landing page shows your app before it’s launched. It’s more likely to be effective if it provides concise information about the company, its offering and why it’s different and valuable. When users have to decide if they’ll give you a chance, you need to offer them a carefully planned app name, description, icon and screenshot selection. All this should be thought of with App Store Optimization in mind.

The ability to architect a comprehensive app marketing strategy–one that prioritizes quality over quantity and engagement over installs–is what will distinguish the leaders from the also-rans.

Once an app is out in the market, there are a number of KPIs to take into account in order to ensure the success goes beyond the install, as shown in this infographic by RubyGarage. Depending on the results, you will know how to tweak your app marketing strategy. 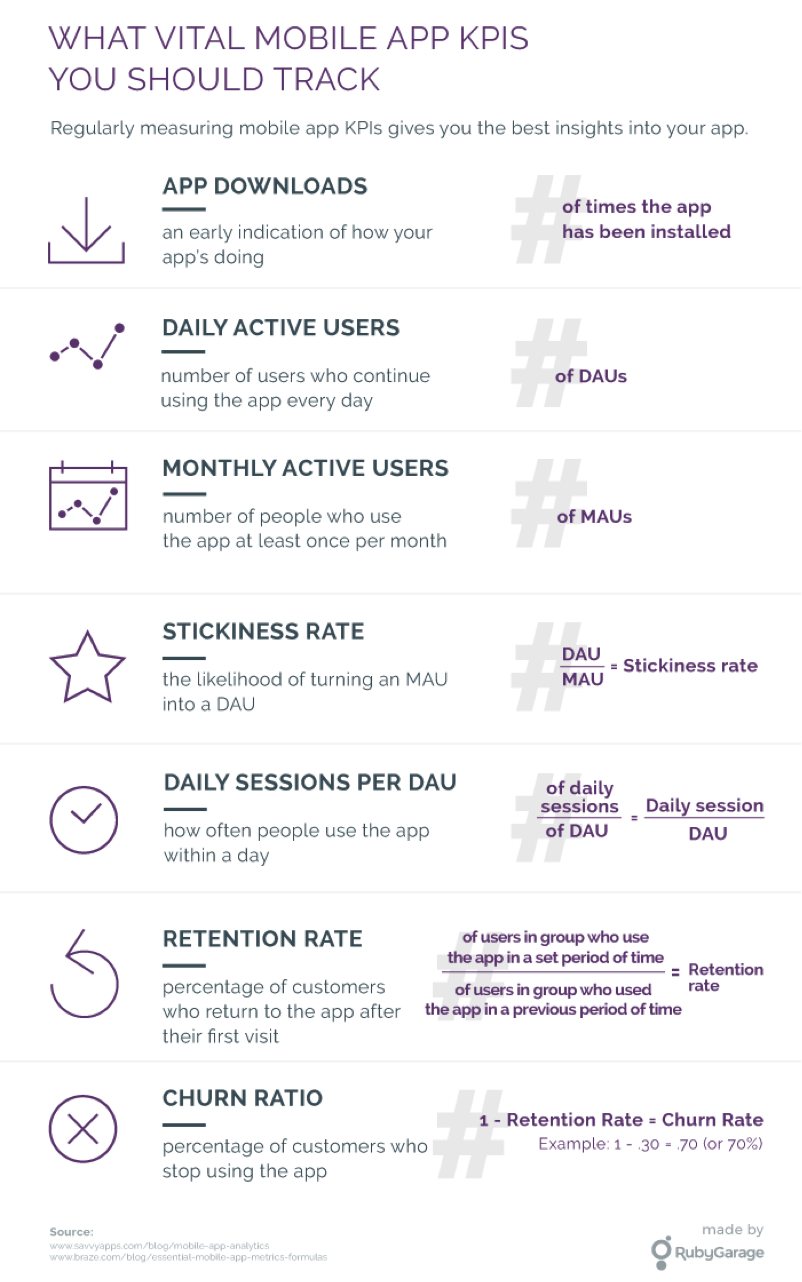 Once a number of users have given you a chance, the question is how many of them will return. As we’ve seen in previous Portada articles, retention is the biggest challenge of selling apps. Keeping consumers is increasingly difficult as options multiply. Marketers need to really communicate with the user, who has an 8-second attention span, reduced curiosity, and limited storage space on her iPhone. 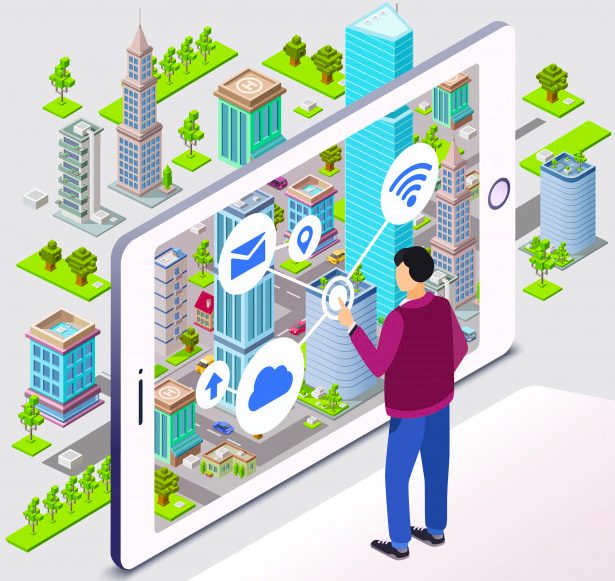 “The ability to architect a comprehensive app marketing strategy–one that prioritizes quality over quantity and engagement over installs–is what will distinguish the leaders from the also-rans,” comments Peggy Ann Salz on Forbes. As she explains, 95% of app users are likely to churn within 90 days, which means a high risk for marketers who get frustrated and need to go deeper into the funnel. Perhaps the most important thing to keep in mind: Installs give you volume, but engagement drives revenue. In December 2017, she talked to ten remarkable mobile marketers and compiled the following list of pieces of advice (among others). 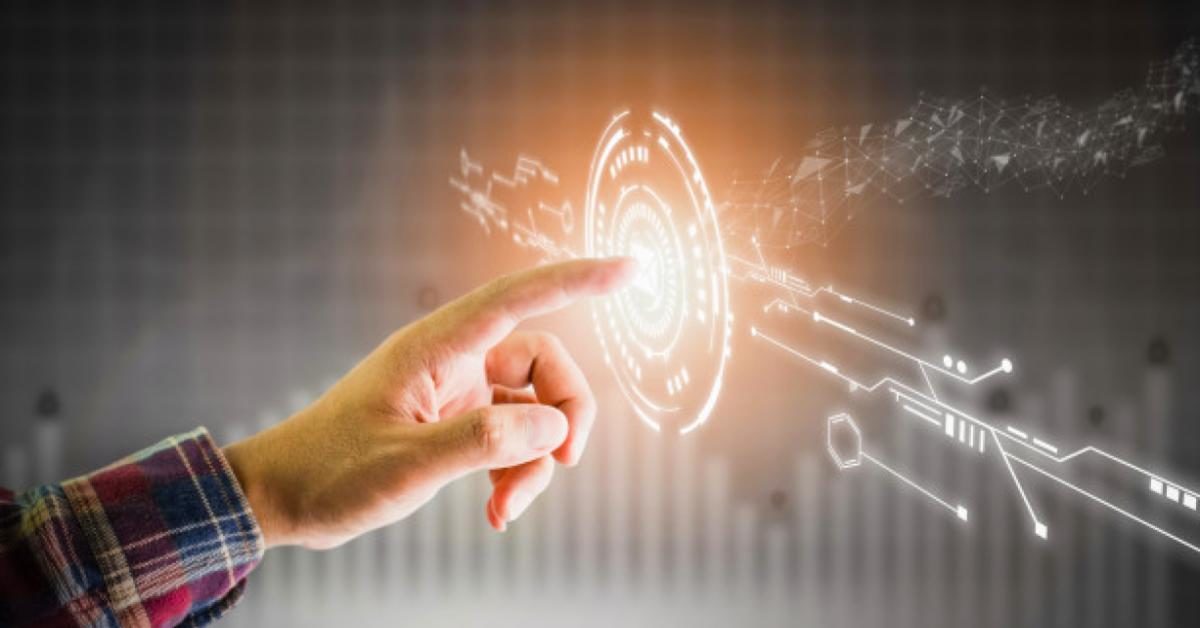 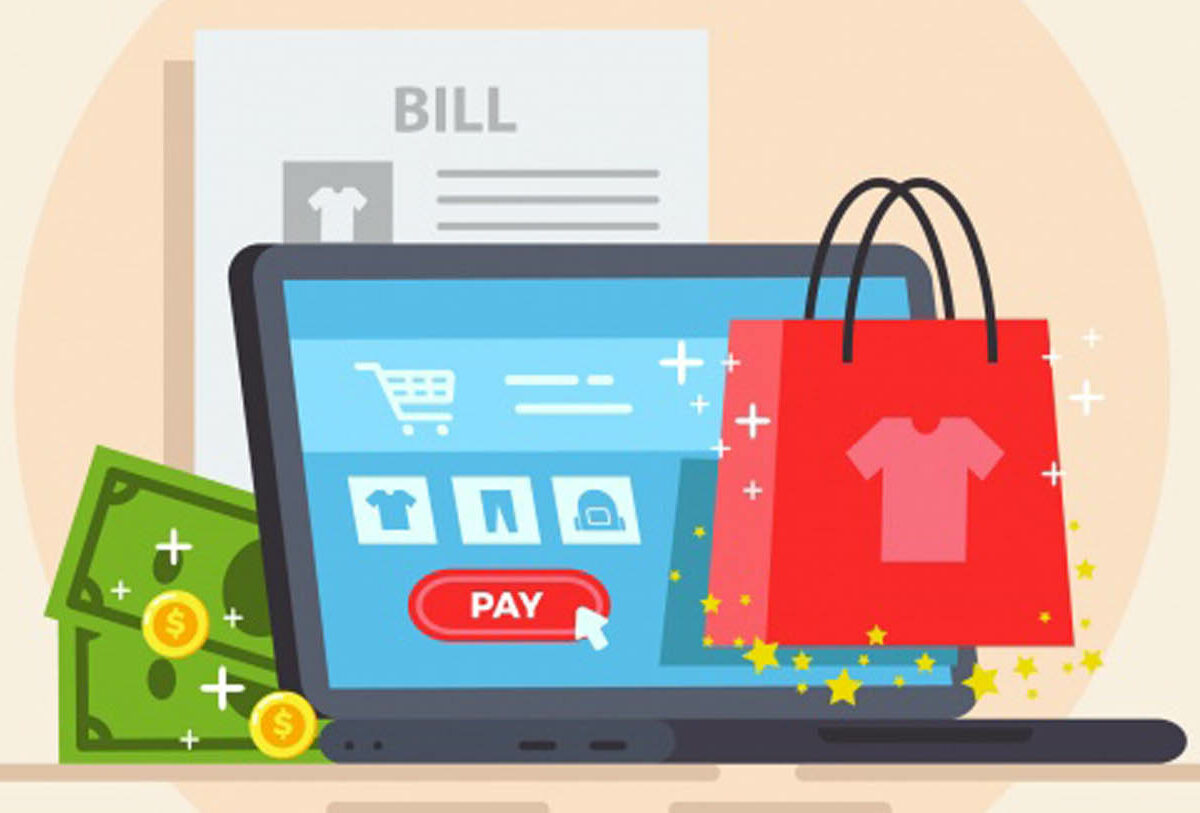