An overview of Content Demand and Management at Major Portals

Terra: Variety of videos on TerraTV platform. From news to music to fashion to lifestyles.Currently Terra does not offer Music downloads, but it is in the process of identifying the right partner for this.

Univision.com It has approximately 100 content partners. Video content partners include music labels (music videos), movie studios (trailers and junkets), professional video agencies and independent producers that have seized the opportunity to produce for online. In addition to these providers, Univision.com has a robust in-house video offering.  It deploys video from all Univision affiliates and uses segments from Univision programming, it also has a dedicated online video staff that produces and shoots videos for the website.

AOL Latino: The trends are related to how and when users are interacting with content and with each other. Whether the content is a video, a photo gallery, an article or a blog posting, the focus is on making sure AOL Latno’s platforms and products are empowering users' involvement in the community that is forming around the content, the issue or theme. The effect of this is symbiotic, where not only can the media being showcased (photo, video, audio, etc) help drive the community engagement, but the community itself drives greater interaction with the media being showcased.

Terra: Music and entertainment. Within the music area there are three initiatives:  First, En Privado is an exclusive program of Terra-produced in-studio performances and interviews with music stars as well as hot new artists. Artists come into the studio and perform 3 to 4 songs, give a short interview, answer member questions and capture the excitement on all the behind the scenes.  The first one of these series was produced with the Puerto Rican singer Ednita Nazario. Second Terra Live, Terra exclusively offers access to the complete video of Ricky Martin's Black and White To

Third, "Arde el Cielo con Mana" an exclusive partnership between Terra and Warner music for the release of the CD. It included an in depth artist experience for Terra users including photo galleries, contests and a live event.

Univision: There is demand for all types of video content, especially entertainment videos.

How many journalists do you have in-house?

AOL Latino: Contracts with a few freelance journalists and has fewer still in-house. On occasion, the latter will draft articles and such, but the role of its editorial team and its programming team, is to set the stage for the community to interact with the content and each other. The AOL Latino guiding principle is to connect people with their passion points. We do not believe we are the sole keepers as to what the larger Hispanic community is passionate about. Our job is to be active where the community is showing us they are passionate and participatory.

Terra: More than 20 people on staff.

What percentage of content is produced in-house vs. sourced from other providers?

AOL Latino: In a very real sense, almost all of the AOL Latino content is produced in-house as a final step prior to publishing.The AOL Latino programming team is dedicated to improving on the raw content for the benefit of our users by first and foremost enhancing it with elements that will inspire users to engage with the community and content. These can include relevant image/audio/video features, links to related stories, archived & historical content, ability to comment and vote, ability to share the content on social networking and book-marking sites, and so forth.

Terra: Approximately 80% of Terra's content is produced by its editorial team. The rest of its content comes from feeds and partners

Univision: A large percentage of Univision.com’s content is produced and adapted in-house.  It also obtains content from other providers.

–  2008 – Forrester Research Custom Study.  Results are based on a national telephone survey among   non- Hispanic and Hispanic internet users. 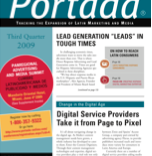