What: Zlatan Ibrahimović, Carlos Vela and Josef Martinez check in as the top three in sales on MLSstore.com to date in 2018.
Why it matters: That these and other Latino stars dominate the list reflects their popularity among not only Hispanic fans but soccer supporters in the U.S. as a whole.

As MLS (@MLS) playoffs get ready to kick in, it is interesting to see the rainbow of kits sold this season and who the fans are choosing to wear: Latino stars anyone?

Data released this week showed that Zlatan Ibrahimović’s (@Ibra_official) impact on the league as a marketing opportunity was as big as it was on the field, as the 37-year-old led all sales on MLSstore.com since the beginning of 2018.

The Latino market … continues to be the prime growth spot for MLS in North America. 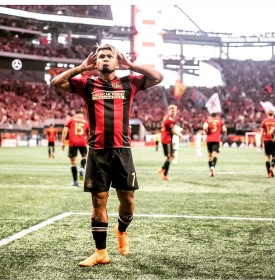 The still to be determined value for MLS remains keeping home grown stars in the United States, as the majority of the bestselling Americans are the more established stars returning home after lucrative and successful careers abroad.

“Major League Soccer continues to find its way up the chain in sports business in the United States, and the appeal of having global stars, especially identifiable Latino stars, in the mix is a huge selling point overall,” said veteran marketer and Columbia University Chris Lencheski. “Will it help when the days of Christian Pulisic and others playing on the national team are in their prime and playing in the U.S.? For sure. However for now the appeal of multinational players is just as important, and that’s great news for anyone involved in the business of soccer in America, a business which is still finding its way on the growth curve.”

The Latino market, one which is very soccer savvy and is no stranger to watching and embracing top flight soccer, continues to be the prime growth spot for MLS in North America. While recent reports have indicated more connections to Liga MX, which remains the most viewed professional soccer on the continent, that fact that Latino stars from various countries are still ratcheting up business is a good sign, and one that bodes well as the postseason begins for soccer in America.