What: At SportBusiness Summit in Miami, La Liga President Javier Tebas spoke up for the Girona-Real Madrid matchup in January, against some opposition from other organizations, including FIFA and MLS.
Why it matters: Tebas believes the match will lead to greater awareness for everyone and support for the sport overall.

“FIFA has no say in this match, and I can say with 90 percent certainty that La Liga clubs will be playing in Miami at the end of January.”

And so there it was on Tuesday in Miami that La Liga President Javier Tebas pushed back on FIFA’s Gianni Infantino and everyone else trying to stop the elite league from bringing its first-ever regular season match to the United States, and further proclaimed that La Liga (@LaLiga), and its partner Relevent Sports, are more open for business on this side of the Atlantic than ever before.

Tebas and Relevent’s Charlie Stillitano (@C_Stillitano) were the afternoon keynote speakers at SportBusiness International’s inaugural SportBusiness Summit (@SportBusiness) being held at the W Hotel in Miami Beach. Tebas was clear in the intentions of the league and was very bullish on what the match will do not just for La Liga in the United States, but for the growth of soccer overall.

…[T]his is really the start of a 15 year joint venture between La Liga and Relevent in the U.S., [and] it will open the doors with new brands to engage, as well as potentially new media partnerships to grow.

“This match has been many years in the making despite that people may think it just happened in the last few months,” Tabas said during a 30 minute conversation. “It is good not just for La Liga and the brand but for all soccer growth in North America. Are there obstacles to overcome? Yes and they were expected, but they will be and I can say with certainty the match (between Girona and Real Madrid) will be played on the 26th of January at 2:00 in the afternoon.”

The President also showed surprise at the rumors that Major League Soccer (@MLS) would oppose this one match, and even through the door open for a more reciprocal agreement to bring an elite MLS match…to Spain. “How could this one match hurt MLS? It will lead to more awareness for everyone. As a matter of fact, if MLS wanted to play a match in Spain we would not only encourage it, but we would help promote it because it’s good business for everyone.”

From a business standpoint, Stillitano pointed out that many of the existing La Liga partners will be activating in Miami, and that since this is really the start of a 15 year joint venture between La Liga and Relevent in the U.S., that it will open the doors even new brands to engage, as well as potentially new media partnerships to grow. 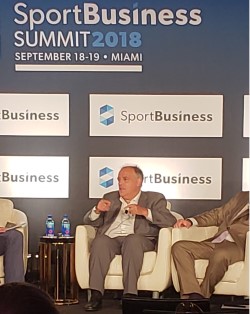 “Because The Premier League has done such a good job of promotion to the U.S. audience, many casual fans do not fully yet understand the size and scope of what La Liga can bring,” he added. “We know that this match and all we have planned going forward can change that, and with that change will grow soccer not just in this country, but globally as well.”

Tebas added that the match will not take place just as a one off. Rather it will be the culmination of two months of engagement which will include youth events, the potential of a women’s match (another big La Liga priority) and much more that will have a “Super Bowl-like” culmination at the end of January. “Fans will get to engage with the players and the brands,” he added. “It will be a great event not just for La Liga, but for our game.”

And that, is good for all soccer business.