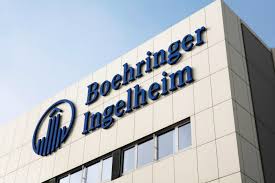 Boehringer Ingelheim Pharmaceuticals, Inc. (BIPI) has announced that it is launching the “Conoce a Don Francisco” sweepstakes, offering a chance to meet iconic entertainer Mario Kreutzberger (better known as Don Francisco), who for the past two years has been the face of the company’s “Cuida Tu Don” initiative. Aimed at engaging and educating Hispanics with type 2 diabetes, which Don Francisco is affected by, Cuida Tu Don provides resources for treatment options and tips for long-term healthy lifestyle choices.The Conoce a Don Francisco sweepstakes prize includes round-trip airfare for two to Miami, hotel accommodations, and transportation to-and-from a private dinner with Don Francisco. Entries can be submitted by visiting www.ConoceADonFrancisco.com. In order to join the conversation about the sweepstakes, friends and family can share their stories on social media using #ConoceADonFrancisco. The winner will be chosen by June 16, 2016, and the trip will take place between June 27 and July 1, 2016.For official sweepstakes rules, terms and conditions and to enter the Conoce a Don Francisco sweepstakes, please visitwww.ConoceADonFrancisco.com. For helpful tips and resources in Spanish about type 2 diabetes, please visit www.CuidaTuDon.com, and always remember to speak to your healthcare provider about any questions or concerns you may have. 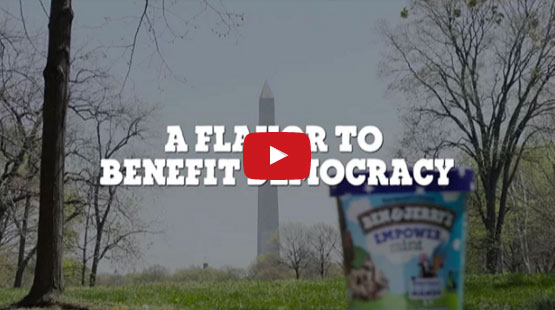 Ice cream maker Ben & Jerry’s  is tackling a not so new challenge: the nation’s democracy. The company chose North Carolina to launch its newest flavor and “Democracy Is In Your Hands’ campaign because it is at the epicenter of the fight for voting rights in the United States. Almost immediately following the 2013 Supreme Court decision invalidating a critical section of the Voting Rights Act of 1965, North Carolina passed a package restrictive voting policies that disproportionately impact black, Hispanic, and younger voters. The Democracy Is In Your Hands campaign is a year long effort focused on getting fans and citizens alike to take a stand in support of democracy that truly represents the needs of all Americans. The campaign will engage hundreds of thousands of Americans around an evolving set of calls to action, including Voting Rights Act reauthorization and voter registration. The Empower Mint flavor brings the campaign to life in freezer cases around the country. The flavor is a creamy peppermint ice cream laden with fudge brownies and fudge swirls. It can be found at Ben & Jerry’s scoop shops nationwide as well as at retail locations in pints as a Limited Batch flavor. To learn more about Ben & Jerry’s Democracy Is In Your Hands Campaign, visit benjerry.com/democracy.

Award-winning actress Sofia Vergara and Avon announced a partnership to launch So Very Sofia by Sofia Vergara, a vivacious new fragrance.  Sofia designed the scent to speak to today’s strong, powerful, beautiful modern woman. So Very Sofia is a floral-based fragrance and this warm and fruity scent encourages women to never be afraid to be their true selves. The scent will launch exclusively through Avon this fall and captures Sofia’s passion and confidence.The fragrance was inspired by a bold woman: one who is her own muse and who encourages others to live life with passion. Both feminine and powerful, she’s not afraid to flaunt her beauty, and is always true to herself. The fragrance will be available exclusively through Avon Representatives and will be US$36.

Taco Bell is renovating four California locations with new seating  and lighting elements to become more like a “chic loft” than a fast-food taco restaurant, Adage reports.Four company-owned locations in Orange Country, Calif. will get the new looks this summer, along with plans to expand last year’s new Cantina design to more urban locations this year.The latest designs were worked on internally and follow September’s Cantina openings in Chicago and San Francisco. Cantina locations, with open kitchens and in some cases alcohol on the menu, may also get an expansion. The next city being considered for the so-called urban development is Atlanta, Taco Bell said. Taco Bell remodeled about 600 restaurants last year and opened another 275. The chain has about 7,000 U.S. restaurants and plans to build another 2,000 restaurants by 2022. Taco Bell is not the only U.S. chain giving itself a bit of a makeover.Taco Bell is owned by Yum Brands. 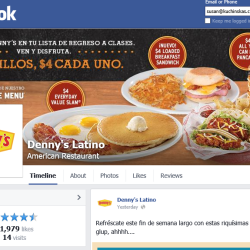 The restaurant chain is expanding is Hispanic marketing with a dedicated Facebook page that will offer original and curated content. Denny’s vice president of marketing John Dillon told Nation’s Restaurant News that, while the company actively reaches Latino consumers in a variety of ways, in both English and Spanish, ” So instead of taking a general-market idea and pushing it in the same way to Hispanics, why not create content targeted more directly at them? That should get better engagement.”

At the same time, Denny’s has found that Hispanics like the same mainstream grub that general-market consumers do – with the occasional addition of chorizo. 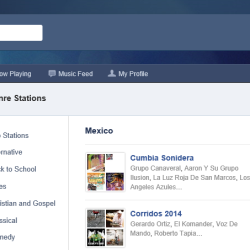 We knew that Pandora was popular with Latinos, but this popular? According to ComScore’s June numbers, 25 percent of Pandora’s total 76.4 million active monthly unique visitors are Hispanic. This makes it the top streaming music site for Hispanics – beating Univision Digital’s 10.5 million monthly uniques.

Billboard notes – as we have before – that Pandora has carefully created channels to appeal to a wide variety of tastes, with subgenres for Latin, Puerto Rican and Mexican. Meanwhile, Pandora’s strength in mobile appeals to highly mobile Hispanics.

Marketers Miss Out on Digital Hispanics

Lee Vann of Captura Group analyzed Adage’s latest Hispanic Fact Pack – and found that media buyers are under-spending on digital to reach this group. He points out that, while Hispanics over-index for all kinds of digital media, last year marketers invested only 7 percent of their Hispanic budgets on digital. Vann wonders whether the current buzz about the total market approach has led advertisers to think – or hope – they can reach Hispanics with general market advertising. He begs to differ.

Enough of the Hot Latinas, Please 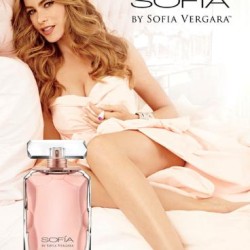 Finally, here’s an opinion from an actual Hispennial. Jose Gutierrez, a staff writer for San Diego State University’s Daily Aztec, complains about the stereotypical Latino characters in TV and movies, those of the hot blood, exotic features and Spanglish. He writes, “As people, we are far more than stereotypes. As humans, we deserve to be represented as such. It goes without saying the media influences and shapes our perceptions about the world. Seeing Latinos represented almost exclusively as the aforementioned stereotypes is incredibly damaging and doesn’t go without negative repercussions.”

On the other hand, Modern Family, home to possibly TV’s best-loved Latina, has turned Sofia VErgara into a major star complete with red-carpet coverage and endorsement deals. Last year, Vergara defended the character, saying that while everyone is different, Gloria has aspects of women she knows.

What do you think is the best way to represent US Latinos?

What: Sofia Vergara will launch her fragrance for women¨ SOFIA BY SOFIA VERGARA ¨ to debut on the Home Shopping Network (HSN) on April 24.
Why it matters: The Fragance is rolling out nationwide in September.

The  international entrepreneur, actress and style icon, Sofia Vergara, is moving into the fragrance business by launching her first scent, SOFIA BY SOFIA VERGARA.

The fragrance will debut exclusively with entertainment and lifestyle retailer HSN on April 24th and in key markets internationally. SOFIA will roll out to retailers nationwide in September.

Fabricated with perfumer Bruno Jovanovic (IFF), SOFIA BY SOFIA VERGARA opens with a berry blend to represent Sofia’s energy while the middle notes embrace her love for her native country, Colombia. The fragrance combines unique ingredients, including:

“I wanted to bring a little bit of who I am, my ethnicity and create a fragrance that is a true reflection of me,” says Sofia Vergara.

“Sofia wanted to be very involved in the development of the fragrance and we knew it was critical to carefully choose the right partners (Maesa and Parlux), as well as the distribution channels,”said Luis Balaguer, CEO and co-founder of Latin World Entertainment with Sofia Vergara in 1994.

Donald Loftus, President of Parlux Ltd. said, “Once we had the right fragrance and packaging, our next step was to find the ideal retail partner. HSN is the perfect platform to introduce Sofia’s signature fragrance as it allows women the opportunity to enjoy a night in with Sofia and shop with her in the comfort of their own homes.” 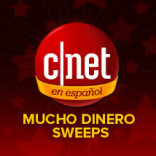 What: Actress Sofia Vergara is the top-earning actress on TV for the second year running, according to the rankings of the 14th annual Celebrity 100 list compiled by Forbes. Vergara earned US $30 million in endorsements.
Why it matters: Most of Vergara’s brand licensing deals are used to heavily pursue the Hispanic demographic. Companies that used Vergara because of her bilingual and strong cross-over appeal include Kmart, Pepsi, Comcast, State Farm, Rooms To Go and Cover Girl.

According to the rankings of the 14th annual Forbes Celebrity 100 list, Sofia Vergara, the star of popular comedy series Modern Family, stands out as the highest-paid actress on prime-time television, for the second straight year. Over the past year, her earnings reached US $30 million, due not only to her work on TV projects, but also endorsements and licensing deals.

Vergara, who in 1998 cofounded Latin World Entertainment (along with Luis Balaguer), a Hispanic talent management and entertainment marketing firm, has signed some endorsement deals that establish her as one of the most in-demand spokespeople, sought-after by marketers because of her undeniable cross-over appeal. Diet Pepsi, CoverGirl, Rooms To Go and thyroid medicine Synthroid signed contracts this year, in addition to Spanish-language commercials for laundry detergent (ACE), as well as Comcast and State Farm insurance.

Both her endorsement and licensing deals with Kmart aggresively target the Hispanic demographic.