What: Meredith Corporation  unveiled its new Quarterly English-language magazine “Parents Latina,” created specifically for Hispanic Millennial Moms.The quarterly debuts with  a guaranteed rate base of 700,000 and incorporates top-notch parenting content of Parents and Ser Padres magazines with the cultural values and heritage specific to bilingual Latina mothers.
Why it matters:  Almost all recent magazine launches in the Hispanic market have been English-language magazines, vs. Spanish-languages, in general, and Hispanic magazines in particular were hard hit last year due to the decrease in print advertising Procter & Gamble, the largest advertiser in the category. 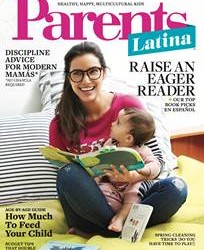 Parents Latina is the latest enhancement to the Meredith Parents Network, which already includes Parents, FamilyFun, American Baby, and Ser Padres, as well as the digital brand extensions of Fit Pregnancy and Parenting. Parents Latina, which will be published initially on a quarterly basis, debuts with a guaranteed rate base of 700,000. It joins Meredith’s portfolio of brands serving U.S. Hispanic women including Siempre Mujer, Ser Padres, Ser Padres Espera, and Ser Padres Bebé.

Backed by the trusted Parents brand, Parents Latina incorporates parenting content of Parents and Ser Padres magazines with the cultural values and heritage specific to bilingual Latina mothers. A wide range of relevant topics will be featured in each issue, including kid’s health and nutrition, women’s health and beauty, home and lifestyle, cooking and family recipes, and finance and budget planning.

By 2030 one out of three children born in the U.S. will be of Hispanic heritage.

Meredith’s Hispanic Media Group currently reaches over 5 million Hispanic women including more than 2 million Hispanic millennial moms. According to the most recent census, by 2030 one out of three children born in the U.S. will be of Hispanic heritage. Advertisers in the launch issue feature well-known brands and marketers as L’Oreal, Procter & Gamble, Johnson & Johnson, SheaMoisture and Toyota among others.

“Parents Latina speaks directly to Latina moms who are raising children in a modern-day multicultural family setting,” says Grace Bastidas, editor of Parents Latina. “I’m thrilled to introduce a new magazine that has been created to help parents like me balance our American and Hispanic cultures, so that our families can enjoy the best of both world.

Most of the new Hispanic magazine launches have been in the English-language category. Carlos Pelay, Research Director/Founder at Media Economics Group, tells Portada that the momentum seems to be in favor of English-language titles. “With the exception of Playboy Latino, which launched at the end of 2014), all of the major launches in the past few years have been English-language (e.g. Cosmo for Latinas/Hearst, and Glam Belleza Latina/Conde Nast),” notes Pelay.

Pelay adds that a whole, regardless of language, the magazine segment was hit hard last year. One significant factor was Procter & Gamble’s shift in ad spending from “traditional” to digital and social media. Overall, P&G is estimated to have reduced spending across all media (general market) by 14.4% and by 40% in Hispanic magazines. This was a significant blow because P&G has traditionally been the top advertiser in this segment. Unfortunately, the Hispanic magazine segment has for too long been too dependent on the personal care category which accounted for almost half (48% ) of ALL ad dollars last year. Just two advertisers – P&G and L’Oreal – accounted for almost one-third (31%) of Hispanic magazine segment revenues.

What: Meredith Corporation will launch the new English-language magazine  Parents Latina with a circulation of 700,000, aimed to serve the growing population of English-speaking U.S. Hispanic millennial mothers. The magazine will be launching  in Spring 2015  and complement Meredith’s existing Spanish-language brand, Ser Padres (circ. 850,000, 8 times a year).
Why it matters: In a recent Portada article marketers “complained” that content targeting acculturated Latinas is not good enough and too scarce. Time Inc.’s People en español recently announced the launch of a new English-language digital and print offering  called “Chica”. Now Meredith, another major publisher targeting the Hispanic market is adapting its offerings as well.

Meredith is betting on the millennial Hispanic mom. The magazine publisher is launching a full-fledged quarterly magazine called Parents Latina in spring 2015 with a circulation of 700,000. Parents Latina is headed up by Dana Points, content director for the Meredith Parents Network. She will oversee the magazine’s entire editorial operation. Support staff  to help produce the title will be pulled from the existing pool of workers at the Meredith Hispanic Media Group.  The new magazine will debut in spring 2015 to complement Meredith’s existing Spanish-language brand, Ser Padres.

“We believe Parents Latina will have tremendous appeal to the growing market of second-generation Hispanic moms who crave cultural relevance in their media but prefer to consume it in English,” says Carey Witmer, President, Meredith Parents Network.

“Our research shows that nine out of 10 second-generation Hispanic moms find the concept of Parents Latina appealing to them, and reflected their cultural values and heritage,” says Dana Points, Content Director, Meredith Parents Network.

Hispanic media no longer equates to Spanish-language only and the landscape will continue to evolve in the coming years with more media companies looking to attract this consumer with in-culture content regardless of language.

How is the launch being perceived by the media buying community?

“The launch of Parents Latina is a reflection of the growing Hispanic bilingual consumer seeking culturally relevant content in either language. Hispanic media no longer equates to Spanish Language only and the landscape will continue to evolve in the coming years with more media companies looking to attract this consumer with in-culture content regardless of language,”Karina Dobarro,  Vice President, Managing Director, Multicultural Brand Strategy at Horizon Media, tells Portada.

On the client side, Daniel Villaroel, Director Multiethnic Marketing at Maybelline New York and Garnier, says that “it’s great that we have more ways to reach Latinas, regardless of language. These new publications also recognize they have to go above and beyond to provide qualitative data about their magazine’s success since standard metrics aren’t available.”

These new publications also recognize they have to go above and beyond to provide qualitative data about their magazine’s success since standard metrics aren’t available.

Enedina Vega-Amaez, Vice President/Publisher of the Meredith Hispanic Ventures Group, tells Portada that Parents Latina’s distribution method will be a combination between controlled circulation and subscription. She adds that the new magazine should lure most advertising categories from packaged goods to OTC, to auto, retail and beauty. Regarding Parents Latina’s digital presence Amaez says that “We will be developing a social presence for the brand as part of the Meredith Parents Network.”

The Meredith Parents Network is a gathering of five cornerstone brands – American Baby, FamilyFun, Parents, Ser Padres, and now Parents Latina – .The Network reaches Hispanic moms through dynamic media platforms to engage them in ways they can personally relate to – in the moments, places, and languages that are meaningful to them.

Moreover, many of Meredith’s popular brands – including Better Homes and Gardens, Allrecipes, Family Circle, Fitness and Every Day with Rachael Ray – have significant followings from English-dominant Latina consumers.

“After seven years we have evolved our Hispanic brands across a broad range of multi-channel media and are uniquely positioned to reach Hispanic women and moms via print, digital, mobile, custom content and database marketing,” says Enedina Vega-Amaez, VP/Publisher, Meredith Hispanic Media.

According to the press release, as a content delivery and insight resource for and about Hispanic women, Meredith Hispanic Media uses digital, social, experiential, and media touch points and powerful proprietary and syndicated research capabilities to provide a perspective about the U.S Latina, intimately connecting marketers to this highly coveted demographic.

As part of the newly expanded offerings, Meredith Hispanic Media is releasing highlights from two new trend reports in the food and baby marketplaces. “We are committed to providing brand marketers with insights into the evolving Hispanic consumer,” says Vega-Amaez.

Latina women are redefining the mom market. At over 10 million strong and accounting for one-quarter of all U.S. births, they are poised to drive the Baby Gift Registry market. Meredith Hispanic Media tapped into two sources to learn about baby registry plans/habits of Hispanic women (its partner Vida y Salud’s email newsletter list Embarazo y Bebes and its own Entre Nosotras opt-in database).

Among some of the key findings: