What: Spectrum Deportes, the first 24-hour Spanish RSN, will cease operations on August 15.
Why it matters: Low viewership of Lakers and Galaxy games also available on the English-language Spectrum SportsNet, combined with other market factors including cord-cutting caused a rethinking of how Spanish-speaking fans will receive content moving forward.

It’s not the best of timing with LeBron James (@KingJames) arriving in L.A., but then again, he doesn’t speak Spanish either. 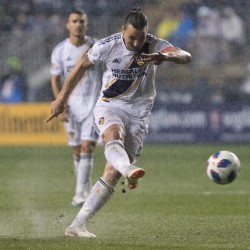 This week it was announced Charter Communications (@CharterNewsroom ‏) will close the Spanish-language regional sports channel Spectrum Deportes (@spectdeportes) on August 15. The company said in a statement, “while we never expected Lakers and Galaxy games to have equal viewership on Spectrum SportsNet and Spectrum Deportes, the [Spanish-language] network averaged less than a few thousand viewers per season since its launch (2012).” The company is expected to offer subscribers an alternative Spanish audio feed of live Lakers (@Lakers) and Galaxy (@LAGalaxy) games and will replace the channel’s sports content with hyper-local all-news programming; Spectrum SportsNet (@SpectrumSN) will continue to operate unchanged.

They can watch on any device, and the idea of a large cost, 24/7 local network is slowly becoming a thing of the past.

While it is rare to have a regional Spanish-first sports network, the closing of the L.A. based channel speaks to some other changing viewing and consumption habits. Spanish language alternative broadcast is available so widely now that having a dedicated channel only to regional Spanish-first is not cost effective, especially given the fact that Spanish speaking fans tend to watch American leagues on U.S. outlets. The most popular non American leagues, LaLiga, Liga MX, even wrestling, would draw a Spanish-first audience on other networks, not on a regional one, so content for a full schedule is a challenge when on a pay service.

While it is the first time in almost 30 years that the Lakers will not have a Spanish first service, numbers show that the English language broadcast, which will not provide SAP, drew twelve times the number of Spanish speaking Lakers fans that Deportes did during last season.

Will there be plenty of bilingual and Spanish language content available to fans? Yes. Is the market still evolving? Yes, especially in key geographic areas. Most importantly, this speaks to cost and mode of consumption. Highlights and news are universal for the fan. They can watch on any device, and the idea of a large cost, 24/7 local network is slowly becoming a thing of the past unless the content is rich, deep and exclusive.