What: LaLiga World Challenge continues its fourth year with RCD Espanyol De Barcelona’s friendly with the MLS Richmond Kickers, associated community activities in Richmond and a subsequent game against FC Cincinnati.
Why it matters: Consistent programs like LaLiga World Challenge can help boost the presence of international clubs in the U.S. and Latin America, in particular with the Hispanic fan base. 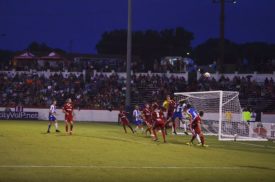 With more opportunities for U.S. and Latin American fans to tune in to matches and connect with their favorite clubs and leagues, European soccer is more popular on this side of the Atlantic than ever before. Looking to enhance that, and grab as much of that fandom as well as build new followings, those organizations have implemented various initiatives. Programs like Chelsea FC’s Premier League victory tour through New York last November and ongoing partnership with FC Harlem (@FCHARLEM), the International Champions Cup (@IntChampionsCup) and various other friendlies are among the most visible.

Consistency in these programs—returning year over year or maintaining a presence in the market like Chelsea (@ChelseaFC) has—is vital. One excellent example is the LaLiga World Challenge, now in its fourth year of raising awareness of the top Spanish league across the globe, with Richmond, Va., its most recent stop in July. Supported by the Spanish government, The World Challenge includes friendlies in every city, but, according to organizers, connecting with fans, particularly youth, is the biggest goal.

“Teams like RCD Espanyol De Barcelona participate in a variety of local activities to meet the fans where they’re at; in their stadiums, with their local leagues and alongside their local athletes,” said Nico García, LaLiga’s (@LaLigaEN) Institutional Spokesperson for International Development. “The most important aspect for the teams is really getting close to the fan and therefore having an impact on the community where they’re present. They truly give the community something special- the availability of every single Espanyol player giving their time to Richmond’s kids is a perfect example.”

We want to grow our fanbase in the U.S. and part of that is being accessible to those who support us. 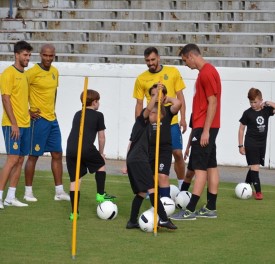 More than 7,000 fans came out to Richmond for RCD Espanyol’s (@RCDEspanyol) friendly with the MLS Richmond Kickers (@RichmondKickers) on July 25, a 4-2 victory for the Spaniards but an even bigger win for the kids who participated in pre-event clinics and for those in the region that, save a trip up I-95 to D.C. for the International Champions Cup or a Team USA friendly, may not have had an opportunity to see a top international squad in action.

“It allowed RCD Espanyol de Barcelona to make a lasting impact on Richmond’s youngest fans,” added Garcia, “when the entirety of the RCD Espanyol team coached a clinic alongside several bilingual Richmond Kickers players in their home stadium.”

And while Premier League, Serie A and Bundesliga can make an impact in these visits, LaLiga has the commonality of the Spanish language that can make connections with Hispanic fans even greater.

“A huge amount of U.S. cities have Hispanic populations, and LaLiga has amazing fans from those populations-Spanish being a natural connection,” noted Garcia. “However, fans of all types come out for LaLiga World activations in both the U.S. and Latin America. As the league has grown in popularity, because of its entertaining style of play and atmosphere, more and more fans are well-versed in our clubs and players and can’t wait to meet them in person.”

For Espanyol Director of Marketing Antoni Alegre, the team’s participation is a natural fit, even as the 2018-19 league season looms.

“Pre-season is important, but using our summer time to visit other parts of the world is also important,” said Alegre. “We are nothing without our fans, and our international fans also deserve our full attention. We want to grow our fanbase in the U.S. and part of that is being accessible to those who support us.”

Alegre adds that it’s one the players look forward to as well.

“Some of our players had never been to the U.S. before—to go to a country where they’ve never been and hear a fan yelling out their name after a match is something special,” he explained. “Our club is grateful that LaLiga World challenge gives us what we need to expand our brand internationally, letting us maintain and grow fans.”

As with any program like this, it’s what is left behind and the next steps for both LaLiga and Espanyol that are critical. For Garcia, the unique experience, for both fans and players, is key.

“LaLiga clubs have left behind once-in-a-lifetime experiences for the fans they’ve touched,” he said. “We feel confident that every child who’s gotten a chance to play, chat, get an autograph and get to know LaLiga players will go on to be lifetime fans of the club. Every single one of these new fans, more than 7,000 in the stadium in Richmond and more than 16,000 in Cincinnati, is essential. Clubs like RCD Espanyol de Barcelona also look for synergies with local clubs to help develop knowledge-sharing agreements; sharing knowledge about things like youth development and academies in Spain. The clubs often hope to develop further long-term sports projects with the local clubs with whom they collaborate.”