What: PSG star Neymar Jr has signed on with global banking firm QNB as Brand Ambassador and is a key member of the soccer-centric OTRO digital fan club.
Why it matters: Neymar Jr’s international appeal has never been stronger and is still growing, as the 26-year-old Brazilian star continues his ascent up the Forbes top sports earners list.

Paris Saint-Germain (@PSG_inside) star Neymar Jr (@neymarjr) has never been bigger. The Brazilian standout has helped PSG to a sizable lead in the French Ligue 1 (@Ligue1_ENG) standings to date with 11 goals, and his off-field success may be even greater. At 26, his estimated income this year is $90 million USD, with Forbes ranking him 13th among sports figures worldwide. A growing portion of that is via sponsorship, with Gillette (@Gillette), McDonalds (@McDonalds), Nike (@Nike) and, more recently, GaGà Milano (@GaGaMilanoWorld) and Café Pilão (@cafe_pilao) showing the breadth of his appeal.

The São Paulo native added two notable partners recently, one on the endorsement side and another in digital communication. This month, Middle East/African financial giant QNB Group (@QNBGroup) named him as Global Brand Ambassador (expect to see plenty of Neymar Jr-themed QNB marketing soon among soccer circles). This comes following soccer-focused digital platform OTRO (@OTRO) having announced that he is among several international stars signing on to the Players’ Tribune-type site.

In his playing prime and with a five-year contract with PSG in hand, expect to see Neymar Jr’s name even higher on next year’s Forbes rankings. 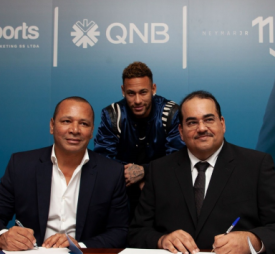 “We are delighted to welcome Neymar to the QNB family; a man who shares many of the same values with our brand and who is always looking for opportunities to reach greatness,” said Yousef Darwish, General Manager of QNB Group Communications, in a statement. Named one of the 100 most influential people in the world, Neymar Jr is a true sport icon who inspires fans worldwide to strive to reach the ultimate standards of excellence.”

The ambassadorship expands upon QNB’s partnership with Paris Saint-Germain, which includes a sleeve logo on the team kit as well as other financial connections to the club.

And his connection with OTRO affords Neymar Jr another opportunity to present these and other partners and causes. Lionel Messi, David Beckham, James Rodriguez and Luis Suarez are among the others on board with OTRO, a “freemium”-model site which last week announced a new round of investment.

In his playing prime and with a five-year contract with PSG in hand, expect to see Neymar Jr’s name even higher on next year’s Forbes rankings as the Brazilian national team star continues his ascent into the top echelon of sports figures worldwide.