The 2013 LatAm Summit & Latin Content Marketing Forum were two days packed with the best Content and Networking Opportunities. The 2014 Latam Summit will take place on June 4th and 5th 2014 in Miami. 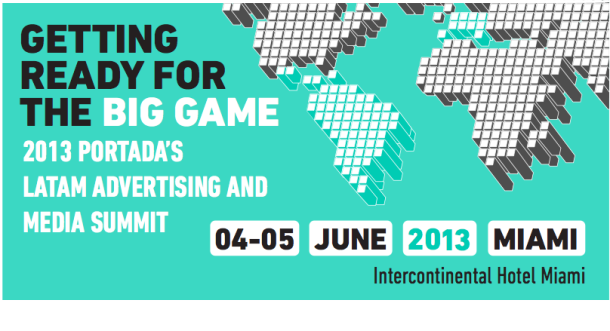 The 2013 LatAm Summit & Latin Content Marketing Forum were two days packed with the best Content and Networking Opportunities. The 2014 Latam Summit will take place on June 3rd and 4th 2014 in Miami.

The 2013 LatAm Summit & Latin Content Marketing Forum were two days packed with the best Content and Networking Opportunities. Below is the complete coverage by Portada’s Editorial Staff. (The 2014 Latam Summit will take place on June 3rd and 4th 2014 in Miami).

The web entrepreneur, known for pushing boundaries and for his constant clashes with so-called “conventional media,”  came across as a charming, bright and thoughtful observer of the digital media space. During an on stage interview conducted by Laura Martinez, Portada’s Senior Correspondent, Denton provided details about the recent launch of the Spanish-language version of Gizmodo, and explained the economics of the digital advertising and media space.

“We can become viable with a two-person, full- time staff by using our Kinja discussion platform, content from Gizmodo in English and a team of freelancers,” he noted.  “We can become profitable very quickly compared to a traditional media company, which needs to hire dozens of journalists, and may need up to 5-10 years to be profitable,” Denton noted. He also said that blogs and content about gadgets are among the most profitable online publishing segments.

Denton cited Gawker’s proprietary Kinja Discussion Technology as one of the main factors behind Gawker’s overall success. “Kinja helped us to establish a viable and independent stand alone media company with the best in modern discussion and blog technology.

Another factor for Gawker’s success are its creative solutions for advertisers, that go beyond banner advertising. “We provide solutions for marketers to have meaningful conversations with our audience.” As an example he cited a State Farm campaign that had State Farm’ financial experts answering questions from the Gawker audience.

The Kinja commenting system has also allowed Denton and his team of over 100 writers at Gawker Media to provide a suitable platform for advertisers, PR firms and brand marketers to interact directly with a story, a writer and the top commenters. This, Denton says, is a great way to monetize your content and avoid the middle man (i.e. ad networks.)

In the end, Denton said, everything boils down to one thing. Good stories. Good content. “If you have great content, readers are going to come; and advertisers will want to work with you.”