For the fourth consecutive year, under-12 youth teams including LaLiga Santander clubs and international clubs competed in the prestigious LaLiga Promises, at Sinatra Park soccer field in Hoboken, N.J. The teams, selected by LaLiga (@LaLigaEN) and the Jose Ramon de la Morena Foundation (@fundacion_JRM), had its largest field ever of 16, with squads from Spain, Japan, U.S., England, Italy, Portugal, and Mexico.

The goal for the Spanish football league’s top division, according to organizers, is to support its New York presence and share its passion for soccer. The three-day event featured group play followed by semifinals and finals.

We were impressed by how many young kids and families turned up during the weekend.

“Grassroots projects and know-how transfer is one of our strategic pillars for the U.S. market,” said Rebeca Diaz Gonzalez, LaLiga International Business Development. “Such an event showcases the good and hard work that LaLiga club academies are doing with their youth in Spain. This has led to outstanding youth development and experience at progressing players towards first team.” 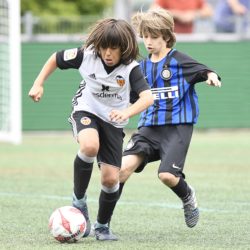 International youth events like LaLiga Promises, which was free to the public and gained huge exposure via select matches broadcast live on Univisión (@Univision) and Televisa (@Televisa) as well as on the official LaLiga channel on YouTube and on LaLiga TV, are critical for international clubs in their effort to gain new fans, in addition to promoting the positive values of soccer as a whole.

“LaLiga has a distinguished presence in the U.S., having trained over 1,200 coaches here as part of our partnership with U.S. Club Soccer in addition to another 4,000 coaches we’ve trained across five continents,” noted Juan Florit, Sports Projects Coordinator at LaLiga, in a statement. “We are excited to show off some of the most talented youth that have learned from LaLiga coaching methodologies at this highly regarded tournament.”

The vibrant urban community of Hoboken, hard against the Hudson River with the New York skyline as the backdrop, was also an ideal choice for the venue, with a large Hispanic population within a short distance.

“Hoboken has a great soccer culture” added Diaz Gonzalez. “We were impressed by how many young kids and families turned up during the weekend.”