From old-fashioned telenovelas to action-packed series and reality shows featuring bikini-clad reporters, Spanish-language producers, broadcast and cable networks gathered this year at the Fontainbleau Hotel in Miami Beach to pitch their content at the annual National Association of Television Program Executives (NATPE) convention, which this year turned 50. A review of the different deals that were struck. 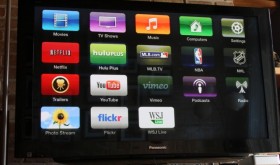 While organizers failed to give out specific figures, NATPE President and CEO Rod Perth said the percentage of attendees from the Spanish-speaking world was “huge,” and reaffirmed the importance of Miami as a hub for Hispanic content. “Miami is a Latin American city in many ways,” Perth told journalists at a Wednesday press conference wrapping the 3-day gathering.

Indeed, most companies offering Spanish-language content to audiences in the U.S. and Latin America were present at NATPE, whether on the Exhibitor floor (almost 40 of the 300 exhibitors offered Spanish-language content) or at the executives suites, including heavyweights like Globo TV, Televisa, Telemundo, TV Azteca and Venevision International. And while many of the deals closed during the gathering involved sales to Latin America, there was a lot of action involving buyers and sellers targeting U.S. Hispanic audiences.

“Latin America is our backyard; but we definitely see the U.S. Hispanic market as the next big hub,” says Cesar O. Diaz, vice president of sales at Venevision International, which was also a prominent NATPE sponsor. “Everyone is now focusing on this market.”

Hosting potential buyers at a suite on the 30th floor of the Tresor Tower, Venevision came to NATPE armed with a few new launches, including telenovelas Rosario and Los Secretos de Lucía and reality show Mi vida en Sayulita, focusing on a group of teenagers living in a laid-back beach resort near Puerto Vallarta, Mexico.

Among the deals announced on or around the conference, MundoFox renewed Minuto para ganar for a second season and it is planning to relocate production to New York City. The show will be produced by Shine Americas. Telemundo struck a deal with Television Nacional de Chile that gives Telemundo U.S., Puerto Rico and Mexico rights for TVN’s telenovela script library. FreemantleMedia Enterprises and Discovery Networks Latin America/U.S. Hispanic signed a deal to bring Half the Sky: Turning Oppression into Opportunity for Women Worldwide to more than 44 countries across Latin America and the Caribbean, including Puerto Rico. Sierralta Entertainment closed several deals for Latin Angels Special, a “travel and beauty series that follows top bikini models, film and telenovela actresses as they travel around the world.”

Catering to a Changing Audience

Hispanic television was also the subject of a crowded panel on Wednesday morning called “The Ever Expanding Opportunities in Spanish-language Television.” It featured top executives from MundoFox, Univision and Telemundo, who discussed mostly about the opportunities –and challenges- of targeting a young audience who doesn’t watch TV anymore.

In addition of its telenovelas, Telemundo, for instance, has gone beyond traditional formats and is rapidly embracing reality shows and producing more web-only series targeting a young demo. “It’s all about reflecting the evolution of our audience and staying relevant,” said Jacqueline Hernandez, COO of Telemundo, who shared a panel with Univision programming chief Alberto Ciurana; MundoFox evp of programming Adriana Ibañez and Creative Artists Agency exec Christy Haubegger.

Also in an effort to cater to young, U.S.-born Latinos, Univision is preparing for the fall launch of an English-language “news and lifestyle” cable network in a partnership with ABC News. The still-unnamed network is expected to launch in September, though Univision programming chief Alberto Ciurana declined to disclose specifics about its programming content or even its name.

Hispanic TV network execs also touched on the growingly diverse subsegments of the market, which is no longer a monolithic bloc of people who immigrated from Latin America and speak Spanish. There are the Spanish-dominant, the English-dominant, the bilingual and the “assimilated” ones, those who “speak English but curse in Spanish,” joked Harris Whitbeck, the Guatemala-born journalist who moderated the panel.

Language constraints apart, one thing panelists seemed to agree on was the fact that Hispanic audiences are starving for good, relevant content, whether they get it on TV, online or on their mobile devices. “It’s exciting to see that we’re moving from Spanish-language programming to programming to Hispanics,” said Haubegger.