What: UCI, IPG Media Lab, and MAGNA have revealed the results of their study “Marketing to the Hispanic Mindset”.
Why it matters: In-language and in-culture video ads are more engaging for Hispanics, at times twice as effective as non-contextual targeted ads.

“Marketing to the Hispanic Mindset”, a new study 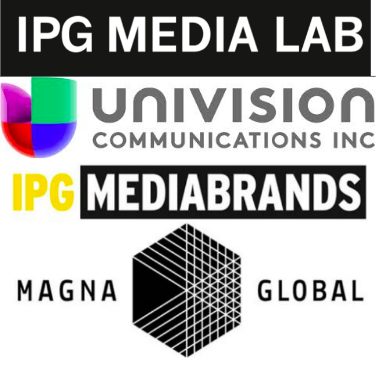 by Univision Communications Inc (UCI) in partnership with IPG Media Lab, and MAGNA (an intelligence and innovation unit within IPG Mediabrands), has proved that contextual targeting in digital video ads can double purchase intent among Hispanics.

Marketers need to understand how to strengthen their connection to Hispanics, whose spending power is projected to reach $1.7 trillion by 2019 and grow by 85% over the next 10 years. The study, conducted across mobile and desktop devices, focused on how topic, language, and culture have an effect on the relationship between consumers and brands.

“We’ve long known the benefits of tailoring brand ads to reach U.S. Hispanics via Spanish-language content and Hispanic cultural nuances,” said Roberto Ruíz, EVP of Research, Insights & Analytics at UCI. “By using breakthrough technology to conduct research on mobile devices and utilizing facial coding technology, this study goes a step further to prove that the content used while running an ad is just as important.  We found that ads created to reach the Hispanic consumer work best when they run alongside in-language and in-culture content, helping marketers create deeper and more meaningful connections with this burgeoning demographic.” 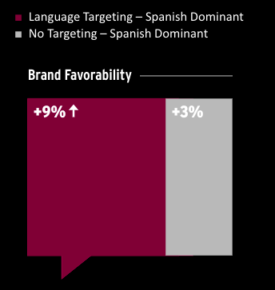 One of the key findings was that language and cultural targeting are important for deepening relationships between consumers and brands, as they capture and maintain the user’s attention throughout the ad, allowing the brand to communicate its message successfully. According to the study, language-targeted ads are twice as effective among total Hispanics, while for Spanish dominant Hispanics, language targeting increased brand relevance.

Moreover, facial coding showed that Hispanics see cultural targeting as a better experience in mobile devices: 60% among the 6,000 interviewees showed more emotion when watching culturally targeted ads than non-culturally targeted ones. In-culture ads were twice as effective at making consumers wanting to recommend the brand more.

“We have intuitively known that context is important in advertising, but we were surprised to see the exact same ad performed best by addressing language and culture,” said Kara Manatt, SVP, Intelligence Solutions Strategy at MAGNA. “We were pleased to be able to explore this topic in depth, especially given the purchasing power of the Hispanic audience.”

For the study, the representative Spanish-speaking sample could select video content according to their preferences. Participants were randomly shown a control or test video ad, which ran as pre-roll. Facial coding technology was then used to record attention and emotions throughout the duration of the video played on each device: webcam for PC and camera for smartphone. The impact of the same ads was compared to each other, allowing researchers to understand the effect of context while tracking differences of effectiveness in individual ads.