In December Honda decided to put its media and creative accounts under review. A decision is expected by the end of the first quarter Honda told AdAge. The original media-agency list  interested in the Honda account  likely wasn’t very long to start, given the plethora of automotive conflicts at most of the large, established agencies. For example, Interpublic’s UM works with Chrysler and BMW in the U.S., while Initiative works with Hyundai’s ‘s namesake and Kia   brands in the U.S. and in various global markets, including Germany and Australia. Within WPP’s Group M, Mediacom works with Volkswagen, and WPP’s Team Detroit is the dedicated agency on the Ford brand. Within Omnicom Media Group agencies, auto clients include Nissan , Porsche, Mercedes-Benz and Mitsubishi. Aegis’ Carat won the General Motors   business last year. Globally,  Honda  reported ad expenses of $2.46 billion in the year ended March 2011. It was an improvement compared with the $2.12 billion it spent in 2010, but still less than the $3.01 billion it spent in 2009.

Saudi Basic Industries Corporation (SABIC) has appointed the Interpublic Group (IPG) as its global communications agency partner of record, following a six-month review. IPG was awarded the account following a competitive review process which launched in July 2012. Three other major global agency groups – Omnicom, Publicis and WPP – were also involved in the review.

Agricultural products giant Monsanto reported Tuesday that its profit nearly tripled in the first fiscal quarter as sales of its biotech corn seeds expanded in Latin America.  The company’s sales grew 21 percent to $2.9 billion in the quarter, with most of increase coming from the company’s corn seed business. The company’s first fiscal period is usually not very profitable, as farming operations slow during the fall months in the U.S. and Europe. But increased sales in Argentina, Brazil, Mexico and other Latin American countries helped drive earnings from September through November. Monsanto told investors last year that it expects to benefit more from the growing season in the Southern hemisphere. Monsanto predicts that international sales will account for half of its growth in seeds for fiscal 2013, which ends in August. Sales of the company’s largest unit, seeds and genomics, grew 27 percent to $1.1 billion, on demand from farmers in Brazil and Argentina.Monsanto’s corn and soybean seeds have genetically engineered traits meant to produce more crops and repel bugs. The company says these benefit farmers enough that they come out ahead, even though the seeds cost more than conventional seeds.

GET ALL THE LEADS YOU NEED WITH PORTADA’S INTERACTIVE DIRECTORY OF CORPORATE MARKETERS AND MEDIA BUYERS TARGETNG LATIN AMERICANS! For detailed contact information on Hispanic Corporate Marketers at these companies and the decision makers at their Advertising Agencies, get access to Portada’s Interactive Directory of Corporate Marketers and Agencies targeting Latin Americans of more than 1,500 Leading Agency and Marketing/Advertising Directors who are targeting Hispanics. (Downloadable into an Excel Spreadsheet for seamless integration into your own database!). If you are a Subscriber to the Directory login and access the Directory.

NOTE: Portada has currently a 25% Discount  Offer to acquire the Interactive Database of Corporate Marketers targeting Hispanics. Register here and use the following Discount Coupon  NEW-YEAR-25 link. (expires on January 31!)

In December Honda decided to put its media and creative accounts under review. A decision is expected by the end of the first quarter Honda told AdAge. Honda noted that it does not include multicultural assignments, which are handled by Muse Communications and Orci.

California Department of Public Health director and state health officer Dr. Ron Chapman has unveiled new ethnic-market advertisements that will continue to educate Californians on the harmful effects of tobacco use. The advertisements, which include radio and print ads for the African American market, will start airing in early January and can be viewed at TobaccoFreeCA.com. In California, Black and Hispanic men smoke at higher rates (18.9 percent and 15.5 percent, respectively) than white men (14.3 percent). Among women, Blacks continue to have the highest prevalence (15.2 percent), followed by whites (11.2 percent). 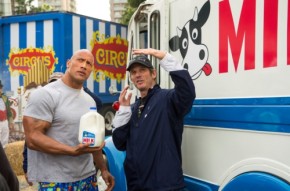 The National Milk Mustache ‘got milk?’® Campaign print ads for the past 17 years.  The 30-second spot stars Dwayne “The Rock” Johnson, who has managed to successfully balance his tremendous professional career with his family life, which continues to be his main priority. Johnson’s success as an actor, producer, athlete and author has gained him worldwide recognition both in and out of the spotlight. The ad is directed by Peter Berg , actor, director, writer and producer best known for his on-screen role in “Chicago Hope” and who just wrapped production on the film adaptation of “Lone Survivor.”  Created by Deutsch, A Lowe and Partners Company, the ad will air in the second quarter of the game and bring to life how including milk’s protein and essential nutrients at breakfast helps fuel active, successful days. As the campaign continues to evolve, the team begins production on its first Super Bowl TV commercial to appear in the biggest football game of the year. The new morning meal-focused commercial is part of a larger, integrated effort to reinforce milk as the breakfast beverage of choice and spotlight its nutrient contributions as part of a daily breakfast routine.  The effort includes in-store retail and consumer promotions along with extensive digital advertising and social media activity.

Tecate and Tecate Light, cervezas con carácter, announce the launch of their annual national retail program focused on helping U.S. Hispanics 21 and older celebrate their passion for football from the moment they buy the essentials needed for a viewing party at home or a tailgate. The brand equity will place bilingual thematic POS materials with the slogan “A Man Knows How to Choose His Team” (a reference to Tecate and Tecate Light), cross-merchandise and consumer promotions at off-premise locations across the country between Jan. 1 and Feb. 15, 2013. “Tecate and Tecate Light offer the increasing number of Hispanic men watching football a beer choice that celebrates their boldness and carácter, while providing them with exclusive offers designed to enhance their viewing parties or tailgating celebrations,” said Felix Palau, vice president of marketing for the Tecate equity. “Our thematic retail program falls in line with our successful sports marketing platform as well as our commitment to provide retailers with the relevant programs and tools they need to make adults feel closer to their favorite sports.” As part of the 2013 program, Tecate will offer consumers a text-in sweepstakes where shoppers 21 and older can enter daily from Jan. 1 – Feb. 15, 2013 for the opportunity to win branded tailgating solutions. The Tecate equity’s 2013 football-themed retail program was developed by Dieste.

GET ALL THE LEADS YOU NEED WITH PORTADA’S INTERACTIVE DIRECTORY  OF  CORPORATE MARKETERS AND MEDIA BUYERS! For detailed contact information on Hispanic Corporate  Marketers  at these companies and the decision makers at their  Advertising  Agencies, get access to Portada’s Interactive Directory of Corporate  Marketers  and Agencies targeting Hispanics of more than  3,000 Leading  Agency and Marketing/Advertising Directors who are targeting  Hispanics.  (Downloadable into an Excel Spreadsheet for seamless  integration into your own  database!). If you are a Subscriber to the Directory login   and access the Directory.