What: The Brazilian Football Federation (CBF) has partnered with Twitter to distribute exclusive content produced by the CBF.
Why it matters: As the universe of “broadcasters” expands, the potential audience for team- or league-based content increases, making it more attractive to potential marketing partners.

The definition of the term “broadcast outlet” has changed significantly and is more nebulous than ever. With Facebook and Twitter broadcasting Major League Baseball games, Amazon Prime taking over the rights for AVP beach volleyball (@avpbeach) matches and many leagues creating their own online networks, the delivery methods for content are more varied than ever.

Team Brazil is the latest huge entity to work with a “new” broadcaster to deliver content, as the soccer power’s national governing body, the Brazilian Football Confederation (@CBF_Futebol), has partnered with Twitter to distribute video of basically everything but the FIFA World Cup 2018 matches: news, training, interviews and more.

Football is a topic of great interest to Twitter users, who already access the platform, naturally, to see and comment on what is happening around the subject.

“The continuous work of approaching the Brazilian national team allows the fans to follow the daily routine of the delegation during the World Cup,” said Rogério Caboclo, executive director of management at the CBF, in a statement. “The partnership with Twitter ensures that this premium content reaches the public in an agile and modern way.” 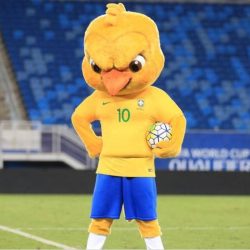 The content is available through the official CBF Twitter page, with mascot Canarinho as a key figure, with his own emoji and hashtag (#canarinho

). Fans can watch the video features throughout the World Cup.

Working with established Internet giants like Twitter, Facebook and Amazon and their inherent marketing muscle is an excellent way for brands, in this case a national governing body, to distribute content that might otherwise only go to its own fandom to a wider audience. The potential for branding is strong, as the “free” video will have a significantly larger potential audience.