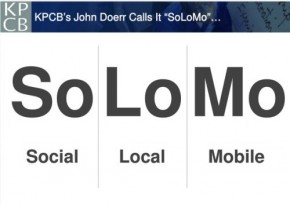 The “SoLoMo” concept, Social-Local-Mobile, will be increasingly applied to marketing strategies—particularly in the Hispanic market, where both social networking and mobile usage overindex. Geo-localization when using mobile media, e.g. checking in on Facebook and/or FourSquare, or in review sites such as Yelp will drive local consumer marketing and advertising. As Entravision’s Esteban Blanco puts it “Local, social and mobile empowered with geolocation is a trend that will change the local advertisement ecosystem for ever.” He adds that personalization, location, recommendation, reviews, and opinions are powerful. Performance advertising and lead generation are only going to grow as key elements for any local business advertisement mix.

Local, social and mobile empowered with geolocation is a trend that will change the local advertisement ecosystem for ever

Pontiflex bets on the expansion of Hispanic mobile performance advertising. It recently introduced a new Spanishlanguage mobile advertising platform catering to mostly local advertisers who want to connect with Spanish-speakers in the U.S. and around the world. Zephrin Lasker CEO and Cofounder of Pontiflex, tells Portada that his company specializes in delivering mobile sign up ads using the CPL model (Click per Lead). According to Lasker mobile banner ads get a very high level of accidental clicks, while sign up forms clearly are filled out intentionally. That is one of the reasons why the prices of sign up ads, which are mostly delivered over sponsored applications, are relatively high.

According to Lasker prices range between 50 cents to $2 per lead (which translate to effective CPMs of $5-$20). The price depends on the level of targeting (e.g. a campaign geotargeting ads to a specific region will increase costs). Currently Pontiflex delivers more than 150,000 sign ups per day to its advertisers. Pontiflex shares revenues with application developers. Most of the sign ups  are delivered over free applications. According to Lasker, it makes sense to keep the applications free and let the app developers make money over the advertising (sign up form sponsorships). Pontiflex advertising is distributed over thousand of applications mostly free games apps, news apps as well as music sharing apps. Pontiflex advertisers spread over all categories with emphasis on local and regional franchises as well as retail, Travel, Financial, and CPGs.