Podcast advertising is one of the few media categories that are growing at a high rate, even in the midst of the Covid-19 pandemic. CNN Audio, the exclusive producer of audio content and podcasts for CNN Worldwide, ,is expanding CNN en Español’s podcast portfolio with the launch of “El Chapo: Two Faces of a Capo”. Narrated by journalist and CNN en Español anchor Fernando del Rincón, the six-episode podcast series follows the trial of Joaquin Guzman Loera, publicly known by his drug cartel alias “El Chapo,” and his reputation as a ruthless drug trafficker.

“El Chapo: Two Faces of a Capo” was released during the week of the first anniversary of El Chapo’s sentence (July 17, 2019), highlights new evidence and dramatic testimony through secretly recorded audio conversations, as well as through text messages and letters, that allowed the jury and the public to get an inside view of how El Chapo managed the inner workings of the Sinaloa Cartel. Audiences learn about the shocking details that came to light during his New York trial, his violent and unscrupulous methods, as well as other sides that, until now, have remained hidden. All episodes are now available to listen at http://www.cnn.com/elchapo, across mobile devices via CNN’s apps for iOS and Android, and on all major podcast platforms, including Apple Podcasts, Spotify, Stitcher, TuneIn, iHeart and Pocketcasts.

Podcast advertising is one of the few media categories that are growing at a high rate, even in the midst of the Covid-19 pandemic.  Cynthia Hudson, SVP and managing director of CNN en Español and Hispanic strategy at CNN recently told Portada that CNN en Español’s  podcast ad inventory is sold out until July.
According to the IAB and PricewaterhouseCooper’s full year podcast ad revenue study, the category will grow  by 14.7% to US $ 1 billion in 2020. Media buying agency Omnicom and Spotify recently announced a  a deal worth US$ 20 million in podcast advertising.

The podcast is supported by CNN Audio and WarnerMedia’s network of advertising partners.

They add that the they El Chapo podcast is among the “the top 10 of LatAm podcasts and has millions of downloads on a daily basis.” More podcasts series are in the offing, according to the source, as “several unnanounced projects are currently in development.” 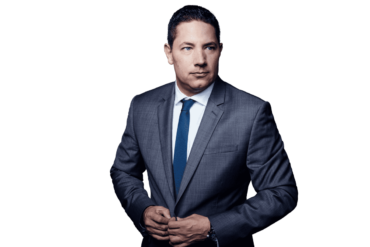 CNN anchor Fernando del Rincon, photo, tells Portada that it was an “exciting challenge to adapt the El Chapo story to a podcast.”  Regarding the differences between audio production and television production he notes that they are quite different from each other, especially when it comes to storytelling: “Storytelling in a podcast relies heavily on your voice, and the content and tone depend so much on how you narrate the story. It’s all about engaging listeners to draw them in. The original El Chapo documentary was produced for TV where there is visual support, so adapting the content into a podcast was not an easy task since it’s a complicated story to tell. But the end result that we produced is amazing.”

Storytelling in a podcast relies heavily on your voice, and the content and tone depend so much on how you narrate the story.