The Dodge brand is targeting multicultural millennials with a Spanish/English ad campaign for the 2013 Dodge Dart featuring global music sensation Pitbull. The rapper, who utters his signature “!Dale!” (“Let’s do this!”) phrase in the spots, also composed original instrumental music called “Drop 2 the Bottom” for the commercials: “How to Change Cars Forever” and “How to Break Through and Succeed.”  The campaign reflects the Dodge brand’s focus on targeting multicultural millennials for the compact car segment. The Dodge Dart multicultural ads will air on various national Spanish-language and bilingual networks.  They will also air on the Aspire and BET networks this month.  Digital ads will accompany the TV spots. The ads are available for viewing on the Dodge brand’s YouTube channel, www.youtube.com/user/dodge. 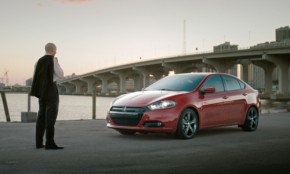 The first of the ads, a multicultural variation of the 30-second “How to Change Cars Forever” spot that debuted in June 2013, was produced in Spanish and English by Lopez Negrete and introduces Pitbull as the celebrity endorser for the Dodge Dart.  A 60-second version of the spot will air July 18 during the “Premios Juventud” youth awards show on the Univision Network, featuring performances by popular Latin artists.  The annual award show reached over 9 million total viewers in 2012.

A second 30-second spot, titled “How to Break Through and Succeed,” is currently airing in Spanish and will launch in English later this week.  The commercial highlights a duality between the effort behind Pitbull’s music and the hard work that comes with building a car that stands out from those in its class, where both paths cross and unite in success.

“If you want to know where future compact-car buyers are, just look at the audience at a Pitbull concert – it’s cross-cultural and our advertising must connect emotionally with these consumers.” said Juan F. Torres, Head of Multicultural Advertising at Chrysler Group LLC. “Millennials are driving the compact segment growth and Hispanics in particular over index as compact car buyers.  In two years nearly half of the segment’s target demographic, and a majority of the population within ten of the largest cities in the U.S., will be multicultural. The Dart is already attracting young consumers and we’ll continue to develop advertising with a multicultural cadence that connects with this group.”