What: A summary of the most relevant consumer insight research in the U.S., U.S. Hispanic, and Latin American markets.
Why it matters: If you’re trying to keep up with the latest happenings, this is your one-stop shop.

What: According to a survey conducted by Deloitte, 50% of all school-related spend in 2018 will be made during the back-to-school season, which will involve 29 million households and about 54 million children.
Why it matters: Deloitte has found that around 20% of the B2S budget is still for grabs. The survey provides important consumer insights that allow marketers to understand the best ways to approach this year’s shoppers.

As July draws to a close, more and more households prepare to send children back to school in the fall. According to a survey published recently by Deloitte, this is the second biggest shopping season of the year, which is why marketers need to be ready and not underestimate the challenge. In order to gather data on all the consumer behaviors surrounding the B2S season, Deloitte conducted an online survey between May 31 and June 6, 2018. The survey polled a sample of 1,200 parents of school-aged children. All respondents had at least one child attending school in grades K – 12 this fall. These were the key findings.

Even though in-store shopping prevails, online spending is increasing

Back-to-school spending this year is expected to reach about US $510 per household, as opposed to US $501 last year. Households plan to spend about US $292 in stores, more than double the amount they plan to spend online. The use of laptops, mobile, and social is plateauing, but it is expected to increase as more shoppers decide to buy electronics online. 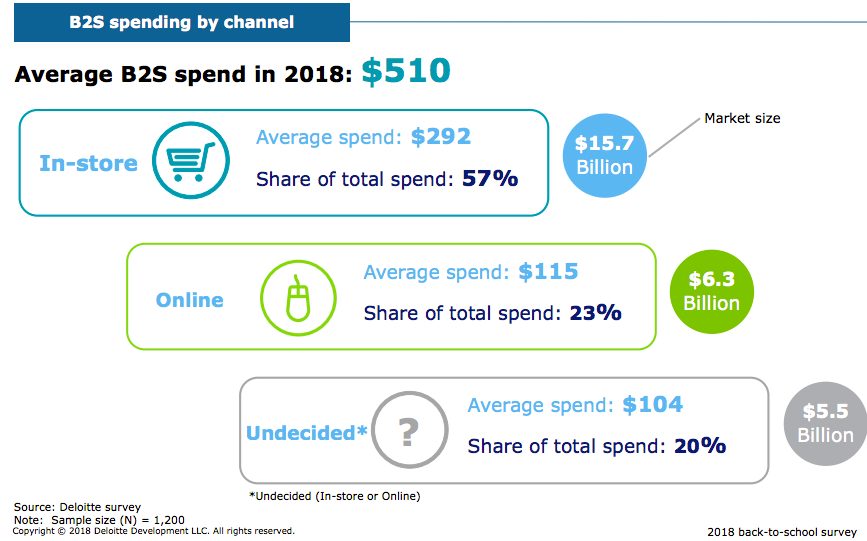 Customers have clear preferences and behaviors

According to the survey, mass merchants are the top location for intended spend, and price-based retailers keep a high-ranking position after pushing down traditional department and specialty clothing stores. However, parents don’t expect to spend much at price-based stores. Income is also an important factor when families decide where to shop: while higher-income shoppers are more likely to visit specialty stores, lower-income consumers expect to visit price-based retailers. Millennials, on the other hand, are less expected to visit department stores and more likely to shop at off-price retailers. 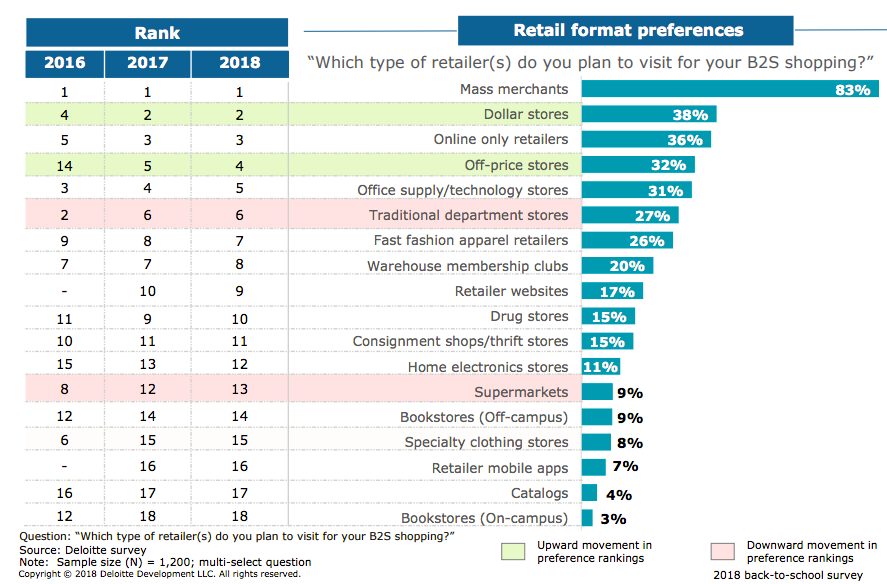 B2S is a long season, and the amount spent is directly related to when families shop. According to the survey results, 62% of parents planned to begin their shopping before August and 68% plan to complete it within a 1-month period of time. However, the longer someone extends their B2S shopping, the more they will likely spend. 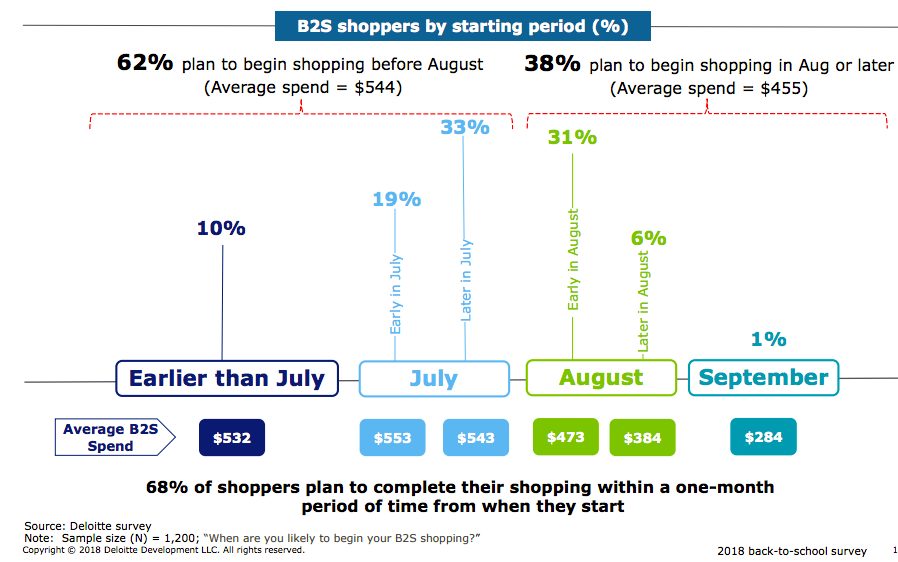 Kenshoo‘s recent study, “Amazon: The Big E-Commerce Marketing Opportunity for Brands,” spoke to 3,100 consumers in the United States, Germany, United Kingdom and France, and 85% said that Google is a top resource for product discovery and research, while 72% of shoppers said the same of Amazon. 56% of customers check Amazon first when researching merchandise.

According to Zenith’s Advertising Expenditure Forecasts, between 2016 and 2019, social media in-feed ads, online video, and other digital formats, such as paid content and native advertising will drive 14% annual growth in total display advertising. Total display expenditure will rise from USD$84bn to USD$126bn, and by 2019, total display will account for 50.4% of internet advertising expenditure, passing the 50% mark for the first time.

A new study by PlaceIQ, “State of Integrated Marketing 2017: Mapping the Journey to Success,” found that 47% of marketers say developing a unified cross-channel customer experience was one of their top three priorities this year. 37% of marketers cited the ability to accurately measure cross-channel results as the most pivotal factor for successful integrated marketing, and 81% ranked location data as the first or second most important element.

According to a study by On Device Research, 47% of consumers state that seeing fewer ads than they do watching linear TV is an incentive to subscribe to paid on-demand TV. 87% of the survey respondents are using mobile apps for more than two hours per day, and 75% of respondents claiming to shop online at least once a month.

According to a study by The Values Institute, Amazon is America’s most trustworthy brand, followed by Marriott, Microsoft, Hilton and Southwest Airlines.

64% of marketers surveyed by Bazaarvoice and Ad Age said that they are not fully clear on the origins of their data sources.

According to a recent study from Deloitte on Millennials and luxury, American millennials spent far less on luxury spending than other markets. Over 25% of the American Millennials report no luxury purchases of $500 or more in the last 12 months, while the survey average across global markets was only 16%.

A Goldsmiths University study found that 61% of respondents preferred a tailored approach when it came to marketing engagement by brands. 53% claimed that they appreciate when a brand is able to use their data to provide a personal experience, but 76% want to know how their data is being used.

A survey by Forrester Research has found that four in 10 teen users aged 12-17 say there are too many ads on YouTube.

According to a study from the Internet Association of Mexico, online activity and interactions among Mexican internet users increased from 20.2% to 70% between 2006 and 2016.

Starting in January 2018, the Argentinean Trivento brand will become the first official wine of the MLS until 2020. Trivento will be allowed to use any of the 20 MLS clubs in its advertising campaigns and create new MLS-branded packaging for its products.

Vice Media announced that it will be doing scripted video programming through a partnership with digital media studio Blackpills. All of the content will be made for mobile viewing and distributed exclusively through Vice’s online video channel.

AT&T, Verizon, Johnson & Johnson and other leading U.S. advertisers are pulling hundreds of millions of dollars in ads from Google and YouTube due to worries that their ads appear next to extreme, hateful content. AT&T will halt all ad spending on Google except for some search ads.

Adobe has revealed two new “clouds,” Experience Cloud, which includes an extensible platform, data, and content systems, and Advertising Cloud, which “rings performance and brand advertising data together so advertisers can see it all in one place, and view their campaigns in a cohesive way.”

Instagram announced that users will now be able to save live videos to re-watch later. At the end of a live video, a ‘Save’ button will now appear in the upper right corner.

Comcast Technology Solutions has entered into an international channel deal with broadcasting and media technology systems architect Qvest Media to offer Tier-1 broadcasters, telecommunication operators and pay-TV companies tools that simplify the publishing, distribution and monetisation of online video content.
Altice N.V. announced that it has entered into an agreement to acquire advertising marketplace Teads, which has an audience of more than 1.2 billion unique visitors including 720 million via mobile.
MGID, a provider of native advertising and marketing solutions, announced that its user dashboard is now available in Spanish. The launch is the first in a series of localized user interface rollouts, and will provide a more streamlined experience for MGID’s Spanish-speaking clients.
DMP Lotame announced the general availability of Lotame Onboarding — a people-based marketing service powered by LiveRamp™ IdentityLink — following a successful beta testing period.

Deloitte‘s latest study, the “Digital Democracy Survey” asserts that 80% will skip digital TV/video commercials, and that over 70% of Millennials and younger Gen Z viewers find mobile ads to be “irrelevant.”Ad-blocking software is a big part of Millennials’ digital media usage: 45% use ad blocking software, with 89% saying that they use it to avoid all advertising. 40% of these respondents use ad-blocking software on their smartphones.

A study of Kellogg Co. brands by Nielsen Catalina Solutions found that when online video ads that meet the Media Rating Council standard saw higher sales lift than those that did not. Ads deemed “likable” by panelists for copy testing firm Ace Metrix had the strongest sales lift of all – a 172 index where 100 is the average for people exposed to ads in the study.

Akamai Technologies announced it has a new technology, Akamai Media Acceleration, to improve the viewing experience for people who watch over-the-top video services.

The Association of National Advertisers has called on digital “walled gardens” — platforms that intermediate their users’ identities with advertisers who target them through the platform’s closed ecosystem — to “allow independent audits” by industry audience ratings self-regulatory watchdog, the Media Rating Council (MRC). The ANA issued an advisory calling on the platforms and explicitly citing the likes of “Amazon, Foursquare, Instagram, LinkedIn, Pinterest, Snapchat, and Twitter,” following a member survey, which found that 90% favored independent audits by the MRC.

The Brazilian ad tech company Predicta has entered into an agreement with video ad platform YContent, whose products allow publishers to attach video to any form of content on websites.

New research from Interact and the Argentinian Association of Digital Agencies reveals that 60% of respondents professionals forecast positive results by the end of the year, with uninterrupted growth, despite a surrounding changing environment.