What: Three September initiatives reflecting baseball’s growing Hispanic influence are Roberto Clemente Day, a new MLB Latin American trainer’s program and the extension of ‘Play Ball’ to Panama.
Why it matters: The Roberto Clemente Award is considered by many to be the game’s highest honor; highlighting and expanding the Latino influence in the game can be key opportunities from brands looking to connect.

September 15 through October 15 is National Hispanic Heritage Month (@hispanicteam), a time when the influence of Latinos in the U.S.A. is highlighted. Dedicated time periods that highlight the heritage of African Americans, women and other groups are perfect opportunities for teams, brands and leagues to connect. The U.S. Latino population, now estimated at more than 58 million, continues to have an affinity for baseball.

Major League Baseball (@MLB), among a series of year-round initiatives that reflect its growing Latino player and fan bases, can point to three in particular as the postseason nears.

Each year, the league dedicates a single day in September as “Roberto Clemente Day,” the day teams announce their nominees for the prestigious Roberto Clemente Award, considered by most to be the league’s highest individual honor, greater even than an MVP or Cy Young. The award recognizes the members of all 30 teams who demonstrate the contributions and significance of the late Hall of Famer as a player and humanitarian, dating back nearly two decades. This year, it’s Wednesday, a day following the announcement of the 30 club nominees. Fan voting on the award commenced on Wednesday and continues through Sept. 18.

…[I]nvolving these trainers in an important MLB initiative will place them in position to make connections within the game that can enhance their ability to work in the Minor and eventually Major Leagues. 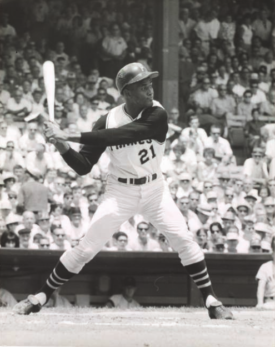 “I am very proud of the great philanthropic efforts of our players,” said MLB Commissioner Rob Manfred in a statement. “Through wide-ranging work and actions, these 30 nominees honor Roberto Clemente’s legacy of being exemplary community ambassadors. Roberto’s unwavering humanitarian spirit continues to inspire our players and fans and serves as a positive example for future generations.”

Two new efforts that didn’t receive as much attention but arguably can have an equally great impact on the game, long-term, are a partnership with Latin American trainers, beginning with pilot programs in baseball-mad Dominican Republic and Venezuela (which, not coincidentally provide MLB the most and second-most foreign-born players). According to the late August announcement, 46 trainers are already on board, with the goal of improving compliance with MLB performance-enhancing substance policies, long an issue with players from Latin America.

Besides helping with the drug issue, involving these trainers in an important MLB initiative will place them in position to make connections within the game that can enhance their ability to work in the Minor and eventually Major Leagues.

The other enhances program is “Play Ball,” reaching Panama for the first time, this week. Children attending the sessions in three Panamanian cities (Panama City, hitré, Herrera; and David, Chiriquí) will receive a bat and ball, branded t-shirts and wristbands, with former Major Leaguers and Panama natives Bruce Chen and Olmedo Saenz on hand to support. The goal is to grown the game across North America, with more than 20 previous stops including Monterrey, Mexico; San Juan, Puerto Rico; and numerous U.S. cities with large Hispanic populations from The Bronx and Manhattan, N.Y., to El Paso, Texas; San Diego, Calif.; and Mesa, Ariz.

What: The Reading Fightin Phils minor league baseball team’s retirement of Roberto Clemente’s #21 highlights a season full of Latino-themed promotions across MiLB.
Why it matters: Teams are connecting with fans through these Heritage nights, encouraging local companies and businesses to partner with them to reach the Hispanic communities.

It’s about a four-hour drive across most of the state of Pennsylvania from Pittsburgh, where Roberto Clemente roamed the Forbes Field, and, briefly, the Three Rivers Stadium, right field, to Reading, current home of the Phillies’ AA affiliate, the Fightin Phils (@ReadingFightins). From 1955 through his untimely death on New Year’s Eve, 1972, Clemente paved the way for future Latino players with a combination of skill between the lines and compassion and community-mindedness off it. Indeed, MLB’s highest annual honor is the Roberto Clemente Award, presented to the player who “best exemplifies the game of baseball, sportsmanship, community involvement and the individual’s contribution to his team,” as voted on by baseball fans and members of the media.

While there have been pushes to have his classic #21 retired across the game, as Jackie Robinson‘s #42 was, Reading is getting a jump on it and doing so themselves. It’s a bold step for the state’s fifth-largest city, an area with a strong Hispanic population. Celebrating this community and the city’s diversity, the team will host Latino Heritage Night on August 22 —its first home game after what would have been Clemente’s 84th birthday on August 18— during which it will retire the number and play as “Los Peleadores de Reading.” Fans will also receive a Clemente Los Peleadores bobblehead figure.

The promotion is one of many Hispanic-themed events scheduled throughout the minor leagues this year. Across the country, 33 teams in 19 states are involved in “Copa de la Diversión,’ a season-long event series specifically designed to embrace the culture and values that resonate most with participating teams’ local U.S. Hispanic/Latino communities. Each team will host multiple events through the season, with each creating culturally-relevant on-field personas that honor the local U.S. Hispanic/Latino communities, to be announced next Tuesday, March 20. 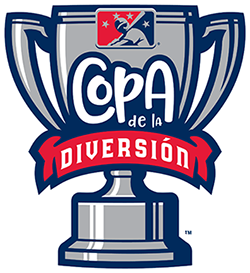 “Minor League Baseball is built on the fun, memory-making experiences created by our teams each and every day,” said Kurt Hunzeker, Minor League Baseball’s Vice President of Marketing Strategy and Research, in a statement last month. “When we introduced ‘It’s Fun to Be a Fan’ and ‘Es Divertido Ser Un Fan’ last season, the overwhelmingly positive response led us to create this season-long event series, further showcasing our teams’ commitment to their communities and MiLB’s unique brand of fun.”

Other teams are tailoring the events to their communities. The Lake Elsinore (Calif.) Storm (@Storm_Baseball), Class A affiliate of the San Diego Padres, are designating a full weekend, June 1-3, as Hispanic Heritage Weekend, their Western Riverside County location ideal for an extended celebration.

The Great Lakes Loons (@greatlakesloons), the Dodgers’ A affiliate in Midland, Mich., have a Latino Night scheduled on July 20, with a post-game salsa dance party.

In addition to forging goodwill, teams have been able to connect the heritage events with corporate partners. First Tennessee Bank, for example, is a presenting sponsor of the Lookouts’ night. The Loons partnered with a local bar & grill for their post-game celebration.