What: James Borrego has been named head coach of the Charlotte Hornets.
Why it matters: The hiring of Borrego may signal a stronger push towards attracting the Latino fan base, which already has numerous superstars of Hispanic heritage to root for.

Last week, the Charlotte Hornets (@hornets) named James Borrego its new head coach— a relatively nondescript hire as far as the NBA is concerned, but a meaningful one for aspiring Latino coaches everywhere.

The 40-year-old Albuquerque native joins a small group of Latinos to ever ascend to the NBA head coaching ranks, including Dick Versace, head coach of the Indiana Pacers from 1988 to 1990, and Earl Watson, who coached the Phoenix Suns from 2015 to 2017.

Borrego is different from the other two for a number of reasons, the biggest of which is that he came from outside the Hornets organization, a first for a Latino head coach.

Borrego’s impact in the Charlotte community, one with a growing population, can also do wonders for the team as it expands its footprint and joins other franchises in better realizing the brand activation value the Latino can have with the bottom line.

Raised by his mother, Lydia, in a single-parent household in New Mexico, Borrego made the move from playing to coaching shortly after college. He’s spent most of his career with the San Antonio Spurs (@spurs), beginning as an assistant video coordinator in 2003 before making his way up to assistant coach, working alongside future Hall of Famer Gregg Popovich. In between stints in San Antonio, Borrego also worked as an assistant coach in New Orleans and Orlando, assuming interim head coaching duties for the Magic after the firing of then-head coach Jacque Vaughn.

Coaching requires patience, both in the day-to-day sense, as well as in the long run when it comes to career opportunities. Not every assistant gets a shot to become the head coach of one of the league’s 30 teams, and that’s without going into the minimal representation Latino coaches have had over the years. Borrego is already making history by stepping into his new seat; he’ll soon have the chance to add to it. 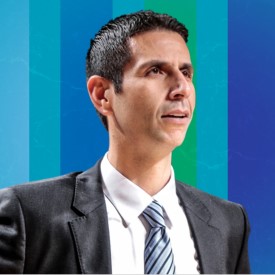 At regular season’s end, the Latino influence amongst brands in the NBA is continuing to grow, and the number of countries carrying the NBA Playoffs is biggest than ever. While there are currently 11 players who identify as Latino in the NBA (including the Celtics’ Al Horford, the Rockets’ Trevor Ariza and the Cavs’ Jose Calderon who are still alive with their teams in the NBA Conference Finals), the amount of Latino coaches and front office personnel who are Latino is still low. Borrego’s impact in the Charlotte community, one with a growing population, can also do wonders for the team as it expands its footprint and joins other franchises in better realizing the brand activation value the Latino can have with the bottom line.

Of course, success on the court is tantamount to any coach. However, his successful story is one that should be amplified and watched as The Association heads towards the NBA Finals and the Draft.