What: Blogalicious , a community of multi-cultural digital influencers and publishers, has partnered with mobile software and advertising technology firm PadSquad for Multi-Cultural bloggers to maximize their mobile experiences.
Why it matters: PadSquad will use its  mobile software to create mobile-friendly versions of Blogalicious publisher websites, while connecting brand advertisers to their mobile audiences.This move comes at a time when smartphone adoption in the U.S.  has been experiencing a 9% growth ,out of which Hispanics represent  77%.

Blogalicious, a community of multi-cultural digital influencers and publishers, has announced a strategic partnership with mobile software and advertising technology firm PadSquad.

Through this partnership, PadSquad will use its proprietary mobile software to create mobile-friendly versions of Blogalicious publisher websites, while connecting brand advertisers to their mobile audiences. The partnership will kick off at the sixth annual Blogalicious Weekend in San Antonio, Texas on November 6-8, 2014 with live demonstrations and a panel discussion including PadSquad’s CEO & Founder, Daniel Meehan.

Blogalicious’ B-Link Marketing Network brings together almost 700 digital publishers made up of African-American, Latina, Asian-American and Caucasian influencers. In the past few years, this community has witnessed how their audiences, which use mobile devices as they browse their sites, have exploded in growth.

“Many of our multi-cultural bloggers and publishers have mega followings and are very active on social media. Since mobile, social, and blogging are all so interconnected, it really made sense to offer our network a solution to help grow their business by leveraging their huge mobile audiences that already exist. PadSquad’s mobile publishing software has proven to be super easy to use, will help them drive more mobile revenue, and gets our network into mobile publishing very quickly,” comments Stacey Ferguson, Chief Curator of Blogalicious and owner of JusticeFergie.com.

“There are so many advertisers saying similar things in similar places. We are tremendously excited about the partnership with Blogalicious because it’s a perfect match between influential multi-cultural publishers, content that connects to deeply passionate and tech savvy audiences, using leading mobile technology. This is a huge opportunity for brands who are committed to making an impact on mobile in the multi-cultural market, ” PadSquad CEO & Founder, Daniel Meehan, states.

Smartphone ownership grew to 68 percent between November and January 2014, up 9 percent from the start of 2013 and Multicultural consumers have led the growth in smartphone penetration, as they’re adopting smartphones at a higher rate than the U.S. average, Nielsen reported.

Hispanics are ahead of the curve in adopting digital devices, including smartphones, as over three-quarters (77%) of Latinos in the U.S. use smartphones.

Hispanics are ahead of the curve in adopting digital devices.Over three-quarters (77%) of Latinos in the U.S. use smartphones.

This segment, which represents 47 million traditional TV viewers in the U.S., has rapidly adopted multiple-screens into their daily video viewing routines. Hispanics watch more hours of videos online (6:41) and on their mobile phones (5:48) than the average American(8:21 and 6:22 respectively.) 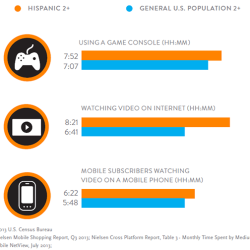