Over the past year, we have witnessed a tremendous growth in the digital world. Social networks audiences have increased significantly in recent months, in line with digital growth in general. As part of a recent Webinar, Alejandro Fosk, Senior Vice President, Latin America for comScore, Inc., highlights the major shifts in digital consumer behavior over the past year across various online sectors including social media, news/information, government, sports, online video and mobile.

The Internet’s global audience has reached 1.8 million users.. The regions of Asia and Europe lead the audience with 43.9% and 23.9% respectively. With a 2 digits increase, LatAm accounts for 10% of the global audience. North America, which used to control at least 50% of the total audience 10 years ago, today only has a 12.6% share. 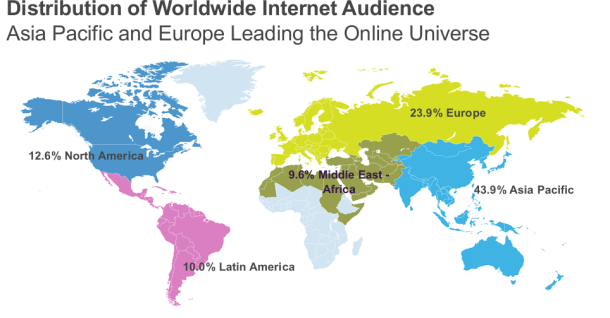 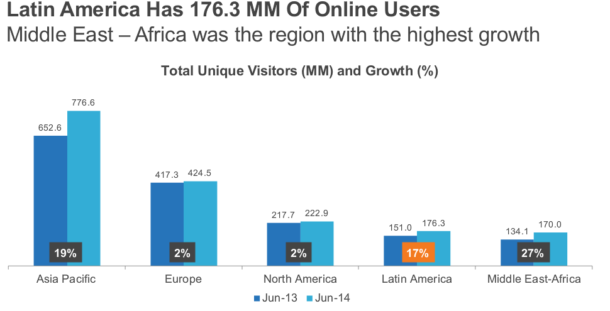 Regarding the  age of the audience, LatAm has the “youngest audience ” globally. 60% of the audience in the region has an age of less than 35. Visitors under 25 are considered “digital natives” directly. Mexicans spent 14.8 hours online on average and 61.3% of time spent is by young people (under 35 years old).

With an average annual growth of 15%, the number of unique users of social networks  in LatAm has increased from 145.97 mn to 167.43.million.

Facebook leads as the most visited social network in Mexico with 22, 043 unique visitors.Youtube ranks second with 18, 369 visitors and Taringa third with a much lower number of unique visitors (6,364).

Although it has a lower percentage in the region comparing to other categories such as Desktop, this category has significantly grown year over year. Mexico and Chile are the two Latin American countries with the highest penetration of Mobile (18.2 m and 11.2 m respectively). In Mexico it has risen from 13% to 23% . In Chile, it doubled. Mexico has the highest penetration in mobile compared to the rest of the Latin America countries.Android is the leading smartphone operating system in Mexico with 74.8% market share.

With an imminent growth, the mobile category is setting the standard in terms of platform growth . Access to web sites from other platforms different from Desktop is  14.9% . Out of this total, 12.0% occurs from mobile devices.

The audiencie shift from TV to digital media has begun with online video category. Mexico leads the region in minutes with 83.7 minutes per unique visitor and a total reach of 18.2%.