What: With World Cup over, it can be deemed an overall global success not just in soccer, but in sports business.
Why it matters: Brands were able to use social media to deliver messages more than ever, via nontraditional outlets like Twitch, a trend that will only increase.

The FIFA World Cup (@FIFAWorldCup) is now in the rear view mirror, as soccer friendlies and several months of MLS (@MLS) now take center stage in North America, as global fans of “The Beautiful Game” await training and then the opening of the elite European leagues in the late summer.

The lessons learned from World Cup activation and engagement continue to grow. The effective implementation of social campaigns tied to the games were in record numbers, Spanish language broadcasts in the U.S. drew solid audiences despite the fact that the U.S. did not qualify for the event, and many of the elite Spanish language countries exited a little earlier than expected. Still the drama and life displayed by first timers like Peru and the continued growth and engagement of Mexico led to an even bigger bounce than what was expected making World Cup in Russia an overall global success not just in soccer, but in sports business.

[comillas]…[B]rands that invested in social were able to find a new engagement platform, especially for digital first millennial consumers, that had not existed before.[/comillas]

In the U.S., the change of leadership at the top of USA Soccer (@USASoccer), and the announcement that the 2026 Cup will be coming to North America has also given rise to even more hope that soccer as a property will still see its biggest days ahead.

With that forward looking idea comes one more look back at World Cup engagement, this time through an engagement platform becoming more and more prevalent as sports looks to be customized and digital first. Twitch (@Twitch ‏), the Amazon owned streaming service, has become a monster and go to platform for esports for several years, and now leagues like the NBA have looked to create more formal relationships as a custom screen experience for fans. The NBA G league (@nbagleague) experimented with great success on Twitch last season, and more and more relationships will be coming, especially as Amazon itself continues its ramp up with broadcast rights for major sports leagues around the world.

Portada worked with Stream Hatchet (@StreamHatchet), one of the world’s elite digital measurement services, to look at Twitch and the World Cup, and how and if the official brands tied to World Cup actually gained share of voice across the channels created by fans on Twitch before and then during the World Cup. Given the fact that Twitch had no official relationship with FIFA, the share of voice for brands might be expected to be small. However what played out was actually interesting, as it shows that brands that invested in social were able to find a new engagement platform, especially for digital first millennial consumers, that had not existed before.

Who were the brands that won out over the thousands of Twitch channels and conversations created specifically around World Cup? There were five that entered conversations best: Wanda, Hyundai, Adidas, Visa and Coke, with the engagement and chatter about the brands on Twitch starting before the Games actually began, and then peaking as the semi-finals and finals came into view.

Given the savviness of Asian consumers around esports and the use of Twitch as a medium of choice, the success of engagement for brands like Wanda and Hyundai makes great sense. However to see global brands like Visa and Coke, and an apparel brand like Adidas be in conversations throughout the course of the Games opens a very unique window for future engagement. Keep in mind that little to no sponsorship dollars were spent in conjunction with Twitch, so all the engagement mentions and conversations, sometimes as large as 50,000, all game about in a generic and authentic form for the young consumers watching and talking about the World Cup on the platform.

It provides a great litmus test into the power of both a custom streaming channel, and a second screen experience not just for the World Cup, but for any sports event looking to engage and activate going forward. Now with such a massive spend by brands on traditional channels, will dollars suddenly flow to Twitch, or even other second screen streaming experiences like Facebook Live, that easily in the short term? No. However this snapshot (below) by Stream Hatchet and Portada shows that there is growing value that has been anecdotal, and now is quantifiable, as brands looks to engage new consumers on a platform they are comfortable on and more and more used to using.

While focus remains on big screen for now, the handheld, custom experience continues to make inroads, the proof, even in World Cup, is now there to see. 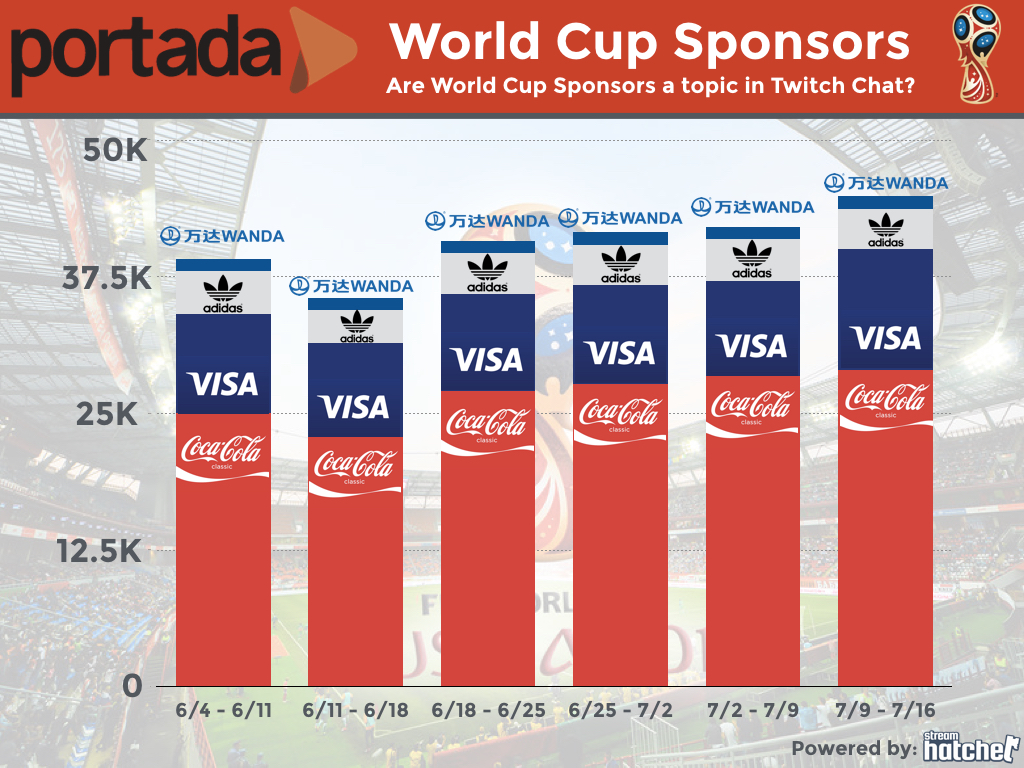