Why More Brands are Investing in MLS Jersey Sponsorships

What: More brands like AmFam, Valspar, Target, Etihad Airways, Acura, and Bimbo are deciding to appear on MLS’ jerseys, and sponsorships are likely to keep growing.
Why it matters: Sponsorship spending on Major League Soccer, U.S. Soccer, and other North American soccer leagues, teams and events is expected to increase by 9.2-percent in 2016, according to IEG research.

Sponsoring an MLS jersey in the U.S. will cost a brand from US$3M to US$4M per year. Although this is much lower than the US$80M-per-year Chevrolet paid English team Manchester United to be on its jerseys, the amount is relatively high considering that the MLS was created in 1996 and introduced jersey sponsorships in  2007.

In November 2006, XanGo was the first company to sign a jersey-front title sponsorship deal, beginning with the 2007 MLS season. The blended juice distributor became the official corporate jersey-front sponsor of Real Salt Lake, an MLS soccer team based in Salt Lake City for four years at a cost of between US$500,000 and US$1M per year, according to The New York Times. The company’s ROI analysis showed that ZanGo got $4.6 for every dollar it invested in the sponsorship. It defined the deal as a successful strategy. Xango’s contract with Real Salt Lake ended after the 2013 season.

To Sponsor an MLS jersey in the U.S. costs a brand from US$3M to US$4M per year.

For the 2017 season, Sporting Kansas City and Columbus Crew were the only teams that changed the sponsors on the front of the jerseys compared to the last season, bringing Ivy Investments and Acura to the field for the new season.

In the table below, we show each team’s jersey sponsor.

In 2016, U.S. soccer teams got US$333M in sponsorships, according to a report from the research and consulting firm IEG. This was 9-percent more than in 2015.

Among the most active brands in MLS, sponsorships are Adidas, Chipotle, ABInBev, Advocare, Heineken, and Comcast. For example, Adidas is the official kit supplier and game ball provider. The German brand is the single most active brand, supporting 100-percent of MLS clubs, according to IEG.

On January 2017, Target became one of the most recent brands to join the soccer league. The retailer saw its numbers grow 10-percent last year, through the sale of soccer clothing and equipment. This was faster than any other sports category, the company explained through a press release.

The increasing interest on the part of brands to join soccer in the U.S. is simple: more people are following this sport. In 2016 the MLS broke its own stadium attendance record when it sold 7.4 million tickets. This was 40-percent more than in 2015.

READ why Scout Sports and Entertainment  Michael Neuman is Bullish on the MLS.

Last year’s MLS Cup 2016 set a record for the most-watched title game in the league’s history, with 3.5M viewers in the US and Canada. Again, even though these numbers are far from the 172M record set by the NFL Super Bowl, they are relevant to the sector. Gary Stevenson, MLS president, even assures their numbers are growing by double-digits every year.

Soccer seems to be in the lead to becoming one of the main sports in the U.S., next to football, baseball, basketball, and hockey. Some marketers, like Ed Carias, Senior Brand Manager at el Jimador Tequila, even believe it has already reached the level of hockey. This will not only happen thanks to the increasing number of fans, but also to the growing interest of brands, especially those looking to target younger generations. 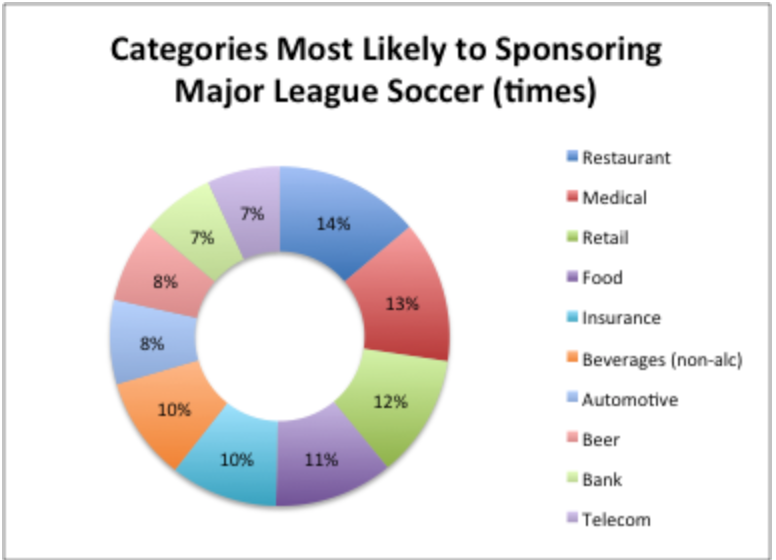