What: The joint bid by the U.S., Canada and Mexico won the right to host 2026 FIFA World Cup, via voting results announced on Wednesday morning in Russia as World Cup kicks off this week.
Why it matters: In short, for millions of reasons. Especially with the U.S. and Canada not qualifying for this year’s event, this vote was critical to the future of soccer in North America. Dignitaries worldwide had plenty to say about the result.

It only took one vote on Wednesday morning in Russia, both sides issuing their final arguments as Morocco and the U.S., Canada and Mexico joint bid (@united2026) quickly learned their fate after years of preparation. In the end, it was the United 2026 plan that secured the victory and right to host FIFA World Cup 2026 by a significant margin (two thirds of the electorate); the 16 host cities in the three nations are now on the clock for kickoff eight years from now.

“Thank you for the incredible privilege,” proclaimed U.S. Soccer (@ussoccer) President Carlos Cordeiro (@CACSoccer) to the FIFA contingent once the results were announced. “Football today is the only victor. We are all united in football.”

[comillas]Every little kid who is 10 years old and says, ‘I want to play in that World Cup 10 years from now’ — well, why can’t they?[/comillas]

Here is a sampling of what Cordeiro and others said following the vote, the result of which means that 2026 will mark the first successful bid by three host nations:

Cordeiro: “I make the argument that we are a vast, powerful, wealthy nation, but we have haves and have-nots, and our disenfranchised are underserved, and in many ways these are the people with whom the sport resonates most. If we can bring them into the game, we’ll go from 4 million to 12 million participants. Every little kid who is 10 years old and says, ‘I want to play in that World Cup 10 years from now’ — well, why can’t they?”

Jason De Vos, Director of Development, Canada Soccer, via Twitter (@jasondevos): “To represent your country on home soil in a FIFA World Cup is the highest honour. It’s an historic day.” 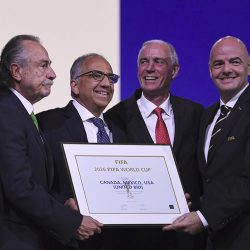 Morocco Football Federation president Fouzi Lekjaa: “I wish to congratulate Fifa for the conduct of this process and congratulate the president for what he has done in order to move things towards more transparency and more inclusion. I would like to reaffirm the determination of my country to continue to work for football and realise one day our dream to host the World Cup in Morocco.”

The Football Association (FA/English Football): “We congratulate the USA, Canada and Mexico on winning the bid to host the 2026 Fifa World Cup. Both bids were of a very high quality and we welcome the fact that the bidding process was both open and transparent.

FA: “We cast our vote for the ‘United’ bid as we believe the independent technical assessment made its advantages very clear. However, it is important to note that both bids were deemed to have met the hosting requirements and a tournament in Morocco, close to Europe and in a country that loves football, had a great deal for English football fans to be excited about.”

A chance to represent 🇺🇸 on the world stage right at home. @TimWeah, @tyler_adams14, and @joshsargent react to the #United2026 win. pic.twitter.com/SV3xxnsMqp