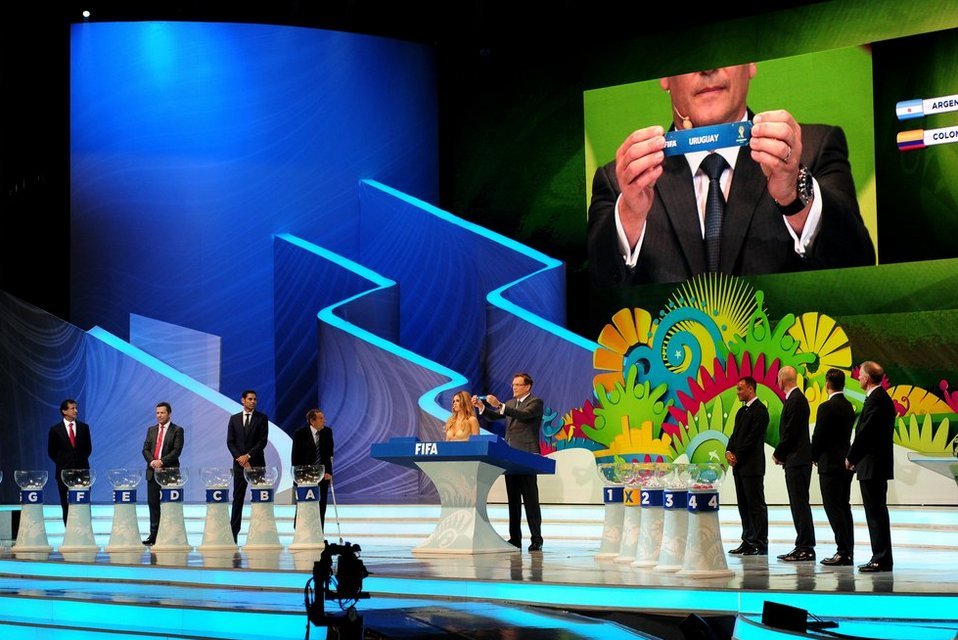 After Friday’s World Cup Finals Draw in Costa do Sauipe in Bahia (Brazil) sports marketers continue to look into ways to best leverage the mega event: Nike and Adidas  are getting ready for their next marketing battle. The Draw placed Mexico and the United States in groups with very strong opponents. Does their underdog status bode well for marketing strategies and ad creatives?

Once Mexico qualified for the 2014 Soccer World Cup to the relief of the sports marketing world two weeks ago, all eyes focused on Friday’s World Cup Draw in Costa do Sauipe (Brazil, Bahia). Both the Mexican and the U.S. National Soccer Teams were placed in challenging groups.  Starting on June

13,2014 Mexico will face Brazil, Croatia and Cameroun in Group A. The U.S.A will play Germany, Portugal and Ghana in Group G starting on June 16. Germany, Brazil and Portugal are among the 2014 World Cup’s top favorites. What are the implications of the Draw in sports marketing terms? Is the underdog role the U.S. and Mexico will play in their groups something marketing strategists can take advantage of ? Gustavo Dominguez, owner of Los Angeles based sports marketing agency, PrimeTime Sports and Entertainment, does thinks so. “The role of the underdog can be expressed very well in the creative of sports marketing campaigns. It can be an effective concept to engage the fans,” Dominguez tells Portada. He adds that in, any case, soccer marketing campaigns have to be an extension of the passion of soccer fans.

(Read a related article on how much Mexico, the U.S. and other National Soccer Teams get paid to play pre-2014 Socccer World Cup friendlies)

The Official Ball, the Brazuca

On the eve of Friday’s World Cup finals draw, Adidas unveiled the official ball of the tournament. The ‘brazuca’ has been named after a local slang term to describe the Brazilian way of life.The official ball is at the centre of Adidas’ marketing plans for the Fifa World Cup. Adidas last month agreed a deal to continue its relationship with Fifa until 2030. Adidas has made every Fifa World Cup ball since 1970. The company has also established a Twitter account for the ball. Its marketing activities will form part of the company’s wider ‘All In or Nothing’ World Cup campaign. Retail plans have also been launched, with the ‘brazuca’ available from selected Adidas outlets around the world starting this week. In the last World Cup, the company sold 13 million balls worldwide, including miniballs and replicas. The brazuca’s U.S. $160 match ball also comes in a miniball and replica versions starting at U.S. $13. It is expected that Adidas will obtain ‘brazuca” ball sales of approximately US $650 million. Patrik Nilsson, CEO of Adidas North America. told Time that he  expects a big chunk of that business to be in the U.S. “Our retail partners were surprised by how many balls they could sell last time,” says Nilsson. With the World Cup played in the same time zone this summer, fans will find it even easier to follow the games.  And see for themselves whether brazuca flies true.”

The battle for being the world’s largest sport brand between Nike and Adidas rages on. Adidas has for more than 40 years decorated soccer kit and shoes with its distinctive parallel lines logo. It has strong partnerships setting it up well for the challenge against Nike: a close relationship with German club Bayern Munich, of which it owns 9%, and with FIFA. Nike entered the soccer market relatively late  in 1994. But it already  has several major partnerships with clubs, including English champions Manchester United.

Benefit from Portada’s Holiday Sale: 50% off Pro Plus this week only!