What: The San Antonio hockey team Rampage held the first two of five Hispanic-themed nights in which it re-named itself Los Chimuelos de San Antonio.
Why it matters: Connecting with the large Latino population in San Antonio is essential for a team whose sport isn’t traditionally connected with this group. 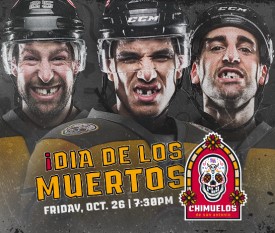 In reality, hockey and Latino culture have a long way to go and connecting with latin culture may be the NHL’s (@NHL) biggest challenge for growth in North America. As a result, select teams like the Las Vegas Golden Knights (@GoldenKnights ) have found ways to embrace and thrive with the Latino community. But even in large areas like New York, with three NHL teams, the growth in the Latino community has not been robust.

Leave it to a minor league team with a large Latino population to find a way to cut through the clutter.

The AHL’s (@TheAHL) San Antonio Hockey team Rampage (@sarampage) used the Día de Los Muertos celebration to rename itself Los Chimuelos de San Antonio. The team applied the name during games held Oct. 23rd and 26th in 2018. Pronounced chee-mueh-lohs, the nickname is Spanish for a toothless man, and consequently was a nod to the many hockey players who flash incomplete smiles. The team will take on the name and theme for three additional games this year. Each game was played on the last Friday of the month in December, January and March. 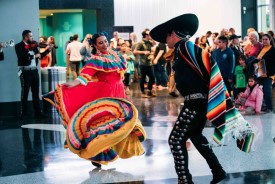 The inaugural Chimuelos contest event began with a celebration and a mariachi band. Fans in attendance enjoyed Folklorico dancers, face painters, photo-ops and even a Día de Los Muertos altar. They brought photos in memory of their loved ones, too. In each of the Chimuelos contests, players wore special jerseys. They painted the goalies’ masks like traditional skulls made out of sugar.

The team’s social media got into the act as well with the Chimuelos theme included in team updates and game recaps. Feedback from fans has been tremendous—some even preferred the name over “Rampage.” 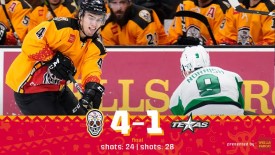 Outside of the arena, there were Mexican and Latin American food trucks. But perhaps most notably, at the first game, renowned Mexican-American chef and San Antonian Johnny Hernandez served signature tacos and quesadillas inside the arena from his restaurant La Gloria. There was even a line of Chimuelos-themed merchandise available at the team store and online.

“It was a lot of brainstorming, combined with focus groups and bringing in a lot of people, internally and externally, from the Hispanic and Latino community in San Antonio,” said Team Business Operations Ryan Snider.

“Nearly 64-percent of the population here identifies itself as Hispanic. So from a business standpoint, it’s obviously important. But really it’s about connecting culturally with our city,” said Snider. “That’s who we are. So it’s vital that we represent who our city is and the cultural values that we represent.”