What: Rafael Nadal, 17 years and 80 career singles titles after his 2001 debut, transcends both the Spanish and English speaking world.
Why it matters: Nadal has found unparalleled success in the marketing arena as well, with a wide variety of sponsors, comfortably across languages and countries.

The US Open (@usopen) has been a global event that draws close to 800,000 fans each year and becomes a global brand that is much more than just a tennis tournament in New York that rings Labor Day weekend every late summer.

Into that global mix, especially since the last American male to win the event was Andy Roddick (@theARFoundation) in 2003, is a kaleidoscope of international athletes all with their own appeal not just in New York but across America, and perhaps no bigger draw for brands is Spain’s Rafa Nadal (@RafaelNadal).  More than Roger Federer or Novak Djokovic, or even rising Americans like John Isner? Yes, Nadal. More than Argentinian and former US Open Champion Juan Martin del Potro? For sure. But why is Nadal’s sponsorship value, which according to Forbes, is in excess of US $27 million, so high, and how does it transcend both the Spanish speaking and Anglo world of tennis in America?

The easiest answer is style and grit. “For a game that is very much built on decorum and tradition, Rafa is fearless, and fans of any language and background love that,” said Randy Walker (@TennisPublisher ), a longtime tennis insider and publisher of many books on the sport, as well as the website World Tennis. “His attributes, overcoming injury, surmounting huge leads, and showing his emotions need no language and they are what anyone who loves spirit can appreciate.”

…[T]hat translates well to all kinds of brands looking for a crossover cultural and athletic connection. 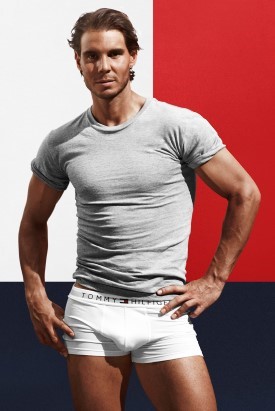 Nadal’s portfolio is led by Nike (@Nike), who has had him on their handpicked tennis roster since 2008 and has built global campaigns around his stylish appearance for several years. Kia Motors (@Kia_Motors), another global disruptive brand, has worked with him since 2004 and has extended his partnership to 2020. Tommy Hilfiger (@TommyHilfiger) made Nadal a global ambassador in 2014 and he has been one of their centerpiece personalities since then.

There are regional brands like Telefónica (@Telefonica) who use Nadal as a global ambassador in key regions like Europe, Asia, and Central, and South America, Banco Sabadell, watchmaker Richard Mille and Babolat, who has had a longstanding relationship with him around the world as well.

Latinos, especially affluent, upwardly mobile and digital-first millennials, continue to crave culture and tradition while embracing that’s where Nadal fits the equation so well. He is Spanish language and manner first, but he fits well into a generation that loves style and flamboyance, which translates across the Atlantic and across cultures. Oh yes, and he wins, as he has done on the blue courts of the Billie Jean King USTA National Tennis Center three times, including last September. However, even without the wins, Nadal’s brand and style fit better with the casual consumer than almost any other tennis player today, this side of Serena Williams or the now aging Federer. It comes down to culture.

“You see the cultural connections, especially for Latino players, every time they come to the Open,” Walker added.  “I remember when Andrés Gómez played and did so well at the Open, all the Ecuadorians rich and not so rich would come out and support him with everything from flags to pots and pans,” Walker added.  “The same happened with Gustavo Kuerten and the Brazilian fans and even this year in qualifying when veteran Dominican player Victor Estrella Burgos almost made the main draw. Their support transcends cultures and is infectious for the sport, and that translates well to all kinds of brands looking for a crossover cultural and athletic connection.”

While the USTA searches far and wide for its next male champion and invests millions into grassroots programs at getting Latinos involved and active in tennis across the country, their ability to capture, which has not yet really happened, a Spanish speaking ambassador to further expand the reach of the Open is right in their midst. Rafael Nadal is edgy, gritty, flamboyant, telegenic and athletic, traits which speak volumes to brands, and he has gotten to make that connection to millions around the world.

His brand and his partners are perhaps the best next step to cross a cultural divide for the game of love, and there is no better place to keep that relationship going than Flushing Meadows. Regardless of the outcome in the rest of the fortnight, Nadal the ambassador has done his job, on and off the court.