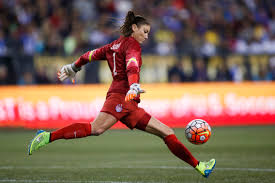 Hope Solo’s quest to succeed Sunil Gulati as President of the U.S. Soccer Federation shouldn’t be, and likely won’t be, strongly considered.

The United States’ embarrassing failure to qualify for the 2018 World Cup helped trigger Gulati’s decision to not seek re-election for a fourth term, creating a logjam of nine candidates looking to replace him.

However, Solo is not the answer.

The decorated U.S. Women’s goalie took the stance — detailing her passion and qualifications on Facebook — that in order for U.S. soccer to return to prominence, it would need to distance itself from the path of capitalism and elitism that she claimed persisted under Gulati’s reign.

Referencing her own experience as a youth, Solo drilled down on how the USSF must refocus on the development of youth soccer in America. From Solo’s Facebook post:

“The systemic problem in U.S. Soccer starts at the youth level. Soccer has always been a middle-class sport and in more recent times, has become an upper middle-class sport. Some of the best clubs around the country charge each youth player between $3000-$5000 per season. I have personally witnessed young players heartbroken over the financial reality that they could no longer pursue their dream.”

Solo holding up a mirror to the USSF is refreshing, and an unfortunate truth. But her vision to eradicate a pay-for-play culture in American soccer, among other goals, rings hollow, as her personal past makes her unfit to do so.

Solo was arrested in 2014 for allegedly drunkenly assaulting her nephew and half-sister, which is still a pending case according to ESPN. And more recently, she was suspended in 2016 for six months after she called the Swedish team that eliminated the U.S Women from the Rio Olympics, “a bunch of cowards.”

Solo has always been a strong advocate for soccer and was outspoken as a player, but some of her actions off the pitch don’t align with her vision to rebuild American soccer at the youth level, should she be president.

Someone that the USSF could benefit from at the helm is Kathy Carter, who is currently president of Soccer United Marketing.

As one of the several candidates vying to replace Gulati, Carter has a proven track record of promoting and executing the business of soccer in America.

Should Solo work with the USSF in some capacity? Absolutely. Just not as the president.

The election will be held at the annual general meeting in February.

Psychology of Colors in Marketing: How Some of the Biggest Brands Use It

What Can We Do To Truly Respect Consumer Data Privacy in Advertising?

U.S. Consumers Turning Back to Physical Stores This Shopping Season – Study by Aroscop