What: Jacob “Stitch” Duran is combat sports’ most famous “cutman,” combining a 20-plus year marketing background and years of in-ring experience to create a leading business.
Why it matters: Duran’s success ringside and in the marketing world are an excellent case study for how a business can be built creatively from a unique set of in-demand skills. 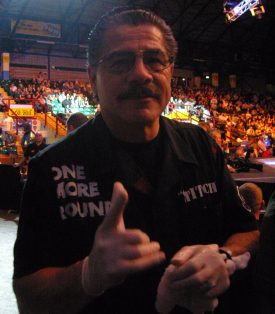 Growing up poor in Planada, California, in the state’s San Joaquin Valley, Jacob Duran (@StitchDuran) dreamed of being a baseball player. In between the peaches, almonds and figs he picked alongside his mother and father in the Central Valley, a region he describes as “the agricultural capital of the world,” young Jacob knew that the hard work instilled by his parents would lead him somewhere. But instead of the scent of the grass of a baseball diamond, it was the somewhat stronger aroma of the boxing gym that reeled him in.

“I went to Merced College (@mercedcollege), near my hometown, and tried to walk on the baseball team,” remembers Duran. “But the school was nine miles from my house, and I didn’t have a car, so I rode to school with friends. But then I stayed for baseball and didn’t have an easy way home, so that ended my baseball career.”

Next thing he knew, in 1974, Duran found himself in the Air Force, shipped off to Thailand, which changed his life.

[comillas]I took quite a paycut, but I followed my dream and it changed my life.[/comillas]

“I’d never heard of Thailand,” joked the gregarious Duran. “But they had Muay Thai, and I really got into the martial arts. Then I got into boxing to improve my hands. I was hooked.”

Duran didn’t make it as a fighter—though that really never was the goal. Instead, it was here that the seeds were planted for probably the world’s most famous “cutman.” 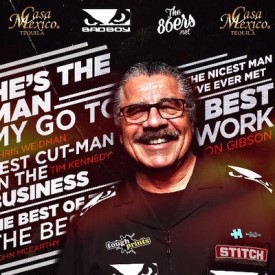 After a 23-year career in marketing at R.J. Reynolds, Duran took a chance, opening the American School of Kickboxing. “I took quite a paycut, but I followed my dream and it changed my life.”

The legend of “Stitch” was born.

“I remember I went to an event in Redding, California, and I saw what the cutman was doing,” he recalled. “I went up to ask him how he does it and he basically told me to get lost—‘I’m not talking to you, you’ll take my job’ was his attitude. I felt one foot tall, but I decided I’d never be that way. That’s not the way cutmen are today, they share ideas, and are more recognized than ever.”

Over time, Duran, who picked up the now famous “Stitch” moniker for his efficiency at his craft, became the cutman of choice for the most prominent fighters in the most important bouts—Wladimir Klitschko, Andre Ward, Mirko Filipovic, Cain Velasquez, and more.

That fame led to a few movie roles—all as himself—in mainstream Hollywood films like Here Comes the Boom with Kevin James, Salma Hayek and Henry Winkler, Creed starring Michael B. Jordan and Sylvester Stallone and this November’s sequel, Creed II (@creedmovie). Duran (no relation to the famous retired boxer Roberto) believes these appearances have raised the profile of his profession.

“I think it has, yes,” the 67-year old noted. “And who wouldn’t want to be the one to do that? Just being in the company of people like Sly [Stallone], Kevin [James], Henry Winkler, millions of people saw what cutmen do.”

For Duran, who today is also the director of regulatory affairs for Final Fight Championships (@FFCfighting), a Las Vegas based promotion that combines boxing, kick boxing and MMA in weekly events, combat sports remain an important staple for the Latino community, which Duran believes is reflected in the personalities of the participants as well as followers.

“We are known as hard working people, and we have a gladiator mentality,” he explained. “For generations, even as we’ve struggled, Latinos have taken that approach and in watching fighters I think they see a little of themselves, always battling. For Latino fighters, it gives them a vehicle to show what they can do to overcome our situations. I kind of see this in the Russian fighters today, escaping rugged times, and using that as fuel.” 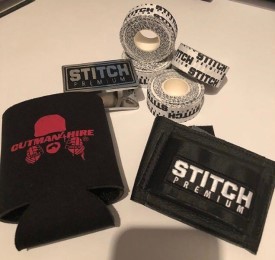 Though it took him awhile, “Stitch” found ways to marry his marketing background and life as the cutman to the stars. First, he worked with the late TapouT co-founder Charles “Mask” Lewis, who developed a special vest, complete with sponsor logos, that he could wear while tending to fighters in the ring. Then came the “One More Round” brand, inspired by the Rocky line “give me one more round,” which is what a fighter wants from his cutman.

“I really became associated with that,” added Duran, who has also written two books about his life in combat sports. “People would come up to me and say, ‘Hey Stitch, give me one more round.’”

The vest led to Duran’s untimely exit from the UFC (@ufc), MMA’s dominant promotion, when Reebok’s exclusive sponsorship prevented the cutman from profiting from his vest logos. So it was off to other MMA promotions and finally to the development of STITCH Premium (@StitchPremium), a line of products specifically for cutmen.

“There are more Hispanic trainers and cutmen than ever before, so our marketing is naturally going towards Latinos,” said Duran. “But it’s not a general consumer product so there isn’t any special Latino marketing. We do a lot of charity work with the Hispanic community though, we started a boxing program in my hometown of Planada. When Creed came out, we got a bus and brought 40 kids out to see it together, we’ve done some fundraisers. It’s important to give back to the community. Sometimes they say that I inspire them, but really, they inspire me.”