Among the dozens of major equestrian events in the U.S. each year, perhaps the most celebrated by the Latino community are Paso Fino competitions, with many of the beautiful animals bred in Puerto Rico, Colombia, Aruba and the Dominican Republic, as well as the U.S. 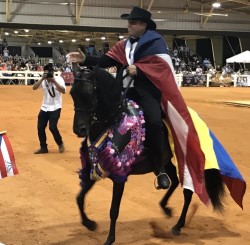 Paso Fino horses can walk, trot and gallop. They are able to do the diagonal moves of most horses; what differentiates them is its unique lateral gait and cadence that diagonal horses cannot perform. This makes them ideal for equestrian events.

Last week, as the Florida Paso Fino Horse Association (@FloridaPasoFino) also celebrated its 50th Anniversary, the organization held Spectrum International at the Equestrian Center of Tropical Park in Miami. The five-day event (May 23-27) highlighted various equestrian disciplines including Pleasure, Performance, Classic Fino, Trocha & Galope, Trote & Galope, International Equitation. They all featured Paso Fino champion horses, a breed which began in Spain but flourished after being brought to the New World, including Santo Domingo, D.R.; Mexico and other South American countries, some as far back as Columbus’s voyages in the 15th and early 16th Centuries. Despite heavy rains, an estimated 3-4,000 Paso Fino horse lovers attended daily.

[comillas]Their Hispanic roots, versatility, smooth gait, brio and stamina is what makes them a winner among Latinos.[/comillas]

“Paso Fino horses are bred and enjoyed in Canada, United States, Puerto Rico, Aruba, Santo Domingo, Panama, Colombia, Venezuela, and several other countries in South America,” said FPFHA Director Carolina Padilla prior to the 2018 event. “There is a growing interest in Europe as well. In the United States, and specially in Florida, many breeders are of Cuban, Colombian and Puerto Rican roots. Once you ride a Paso Fino and feel their brio and the power of their gait, it is quite difficult to overlook this breed.”

That long tradition is clear today, and Florida-bred horses were among those competing in Miami this week. Padilla sees nothing but growth in the event and the sport moving forward. 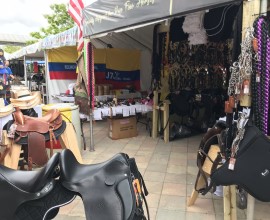 With tickets starting at $5.00 for spectators, Padilla sees the event as one for all fans, and says that the FPFHA markets it as such.

“We promote every edition of Spectrum International in each of our horse fairs, through our PFHA Magazine on a national basis, on our webpage, on social media and via e-mail blasts to U.S. Paso Fino horse breeders, owners, riders and enthusiasts, in our Facebook page, as well as through different [local Spanish language] Radio Stations,” she noted. “We also worked different Public Relations initiatives through local media, and, in support of our community efforts a local TV outlet, America TeVé, is doing some press coverage mentions to promote our event among the Cuban Community.”

As part of the 50th Anniversary celebration, FPFHA has also instituted a Spectrum International Hall of Fame, with the induction of two horses, recognized in a public ceremony during the event.

“The Paso Fino breed is very adaptable. Paso Fino horses performs well in a variety of regions, climates and purposes that go beyond the regular show-ring,” added Padilla. “Paso Finos are seen in competitive trail and endurance rides, even in rodeo, and as working cattle horses as well. Their Hispanic roots, versatility, smooth gait, brio and stamina is what makes them a winner among Latinos.”