What: El Tri announced a deal to play four matches at AT&T Stadium, home of the NFL’s Dallas Cowboys.
Why it matters: It’s the latest in a series of initiatives by North American based leagues looking to further connect with Latino fans, still the largest growing population in the U.S.

While the CFL (@CFL), MLB (@MLB) and even the NFL (@NFL) look south for new fans and audiences, North America’s most popular soccer club is putting down more consistent business stakes in the U.S. On Wednesday, the Mexican National team, whose rights are marketed partially by Soccer United Marketing (SUM), announced a deal to play four matches, one per year through 2022 — at AT&T Stadium, the 80,000-seat home of the Dallas Cowboys (@dallascowboys).

The agreement for “El Tri,” (@FMF) will also include cross promotions with the Cowboys, special festivals and community programs in and around Dallas, as well as some promotions with FC Dallas (@FCDallas) as well.

Bringing National team players who can be role models to a community that may not connect first with Cowboys players will provide a great bridge.

The move to have a consistent presence not that far north of Mexico for the team, will also be great added value for the national team’s business partners like Adidas AG (@adidas), AT&T Inc. (@ATT), Coca-Cola Co. (@CocaCola), Nissan Motor Co. (@NissanUSA), Delta Air Lines Inc. (@Delta), Home Depot Inc. (@HomeDepot) and Wells Fargo & Co. (@WellsFargo), and can help again grow the presence of Liga MX (@LigaMxEng) in the U.S., where their games are already the most viewed North American soccer matches on television. It also sets up a great entrée for international soccer in the U.S. as North America preps to host the 2026 World Cup (@FIFAWorldCup).

The partnership will be a great win for the local community that is increasingly bilingual, and can identify with soccer as their sport of choice in homes where English and Spanish are spoken. Bringing National team players who can be role models to a community that may not connect first with Cowboys players will provide a great bridge. 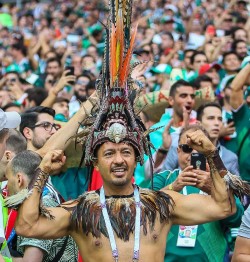 “We look to partner with a lot of the ISD, schools and systems within the area to create those programs and the Mexican National team has agreed to work with us through that and be able to expose some of those children with the national team and help with reading,” Monica Paul, Dallas Sports Commission executive director said.

For the Cowboys, in addition to bringing new faces and filling additional dates at AT&T Stadium, the partnership will enhance their community efforts on both sides of the border as they, and the NFL, look to further connect with Latino fans, still the largest growing population in the U.S. It’s a step forward in making “America’s team” more of “Mexico’s team” than they are (don’t forget the Houston Texans have the closest proximity to the border), with the L.A. Rams (@RamsNFL) and Chargers (@Chargers) also looking to grow into the added value of Mexico as well) today.

It makes great business sense for all, with consistency and elite brands sharing a stage with no downside.

Fútbol and football keep growing together.