What: Cuba will send a team of Olympic and Panamerican Champion wrestlers to the annual Beat the Streets Benefit, May 17 in NYC.
Why it matters: Though diplomatic relations with Cuba are in flux, Cuba participating in a goodwill event like the Beat the Streets Benefit is important in what one day may soon be a viable market for brands.

The annual Beat the Streets (@BeattheStreets) Benefit has for the past nine years held a major Olympic-style wrestling event in New York. Medalists and World Champions abound on an evening of competition in front of a packed crowd watching the world’s best wrestlers battle and showcase the sport. And while it raises substantial, critical funding for an important youth program, the BTS benefit has served another purpose: uniting athletes and fans across the globe.

For the second time in the past four years, Cuba will provide the opposition for the Team USA men on May 17, after becoming one of the first squads to take advantage of the thawing of diplomatic relations between the two nations back in 2015, the most significant since Fidel Castro seized power nearly 60 years ago. Now the Cuban squad, chock full of highly-decorated champions, gets another crack at the Americans, and another grand display of international goodwill.

[comillas] Events like the Beat the Streets Benefit that spotlight Cuban athletes here are even more important in maintaining the ties between the countries in the sports world.[/comillas] 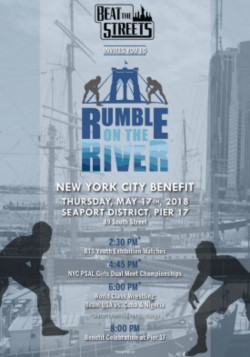 “Even with the still fluid relationship and challenges that exist between the United States and Cuba, bringing their elite athletes to New York on a goodwill project like Beat The Streets is invaluable,” said veteran sports marketer and Columbia professor Chris Lencheski. “The ability to storytell and build long-term relationships throughout Latin America is going to be even more important going forward as economies continue to mature, and this is certainly a story worth telling, and one that brands may find interesting down the road as well.”

Times Square has been the location for six of the previous eight Benefits, including the matchup with Cuba three years ago. Next week, the scene moves to the Seaport District/Pier 17 in lower Manhattan, a majestic venue for what is being dubbed the “Rumble on the River,” incorporating the Nigerian women’s team and culminating in a Super Match featuring Jordan Burroughs (@alliseeisgold), 2012 gold medalist and probably the de facto mainstream star of the sport, perhaps rivaled only by 2016 gold medalist Helen Maroulis (@helen_maroulis), a Maryland native who now works mentoring BTS kids in New York.

With 20 Major League Baseball players hailing from Cuba on current rosters—including established stars like Yoenis Cespedes, Jose Abreu and Kendrys Morales—and many more on the way up in the minors, America’s pastime has been the first beneficiary in the U.S. from the longtime hotbed of talent 90 miles off the coast of Miami.

While U.S.-Cuban relations are more precarious given today’s political climate, events like the Beat the Streets Benefit, that spotlight Cuban athletes here, are even more important in maintaining the ties between the countries in the sports world. It’s hard to predict right now what it will mean for U.S. companies trying to work their way back into the Cuban market after decades away, but USA Wrestling and Beat the Streets NY made it a priority to work through whatever channels it could to make the Cuban appearance a reality.