What: Combate Americas CEO Campbell McLaren, who co-founded the UFC, discussed the MMA organization’s new broadcast deal with Univision Deportes.
Why it matters: With digital and television programming expanding in both the U.S. and Mexico, as well as Spain, Combate is making a big move towards the growing Hispanic MMA audience.

Combate Americas (@combateamericas), which bills itself as the first U.S. Hispanic MMA sports franchise, inked its most significant media deal to date on Wednesday with Univision Deportes (@UnivisionSports). Beginning with Combate Estrellas I, April 13, 2018, in Los Angeles, Univision will air a total of 16 broadcasts. The channel will divide them among its over-the-air and cable channels. The agreement marks the first time ever that Univision Deportes will produce and distribute live MMA programming.

Combate is taking advantage of MMA’s rise in the Hispanic community. At the helm is UFC co-founder and co-creator Campbell McLaren. As CEO of Combate, he brings experience in the sport and a wealth of media knowledge to the new league.

Getting a TV deal with a brand as vast as Univision, to go with an existing agreement with ESPN Latin America (@ESPNPR_LATAM) is a key first step on the international stage. Campbell McLaren discussed the deal with Portada in an exclusive interview.

Portada: What does the new television deal mean for Combate Americas?

Campbell McLaren: “This is huge for Combate Americas. A year ago we began approaching television networks to air our events. But we were not taken seriously. Some of them didn’t understand how strong our product was going to be, especially around millennials. To be able to secure this new partnership with Univision Deportes, a sports media brand that is home to the No. 1 Spanish-language sports network, shows the immense growth that we’ve experienced within the past couple of years.”

[comillas]We have a unique platform that allows us to engage one of the most important and desired consumer groups. They are also historically avid fight fans and have an abundance of assets to leverage against the opportunity.[/comillas]

Portada: How much growth have you experienced since the league’s inception? How do you see the increased marketing in Mexico affect it?

C.M.: “Our growth has been incredible. It has exceeded all expectations since we launched our live television series at the end of 2015.

What began as a mission to deliver a product embracing the Hispanic culture to a U.S. Hispanic millennial audience, soon snowballed into an opportunity to engage a worldwide. The Spanish-speaking millennial audience has demonstrated a massive appetite for the sport but has been underserved in the past.

Combate Americas is now firmly rooted in the U.S, Mexico, and Spain with television and digital programming. It has a growing footprint throughout Latin America. Since we went on the air on broadcast television with a weekly program on Azteca 7 in Mexico, our rating growth has been phenomenal. As a result, it has opened up all kinds of doors to execute an increased amount of marketing to fans. We’re using traditional platforms, as well as digital and mobile.

We are looking forward to going back on the air with our first live show of 2018, “Combate Estrellas I,” in Los Angeles on Friday, April 13.”

Portada: How might Combate the market differently in Mexico and to the Hispanic market in the U.S. than to the overall audience?

C.M.: “Our format of matching athletes from different countries against one another in La Jaula (the Combate Americas competition cage platform) is one that can actually resonate anywhere because of long-standing and exciting rivalries that exist between countries in sports, and the passion and appreciation that fans have for their respective countries.

Naturally, fans in Mexico gravitate towards athletes from Mexico. So it is important for us to invest in Mexican talent that we feel will resonate with our audience. Also, we take the necessary steps to build homegrown talent in Mexico that can become the faces of Combate Americas there, and represent their country while rallying fans around them.” 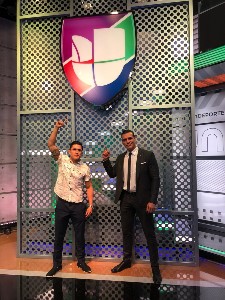 Portada: Does the broadcasting agreement with ESPN LATAM leave room for Combate to sell spots, or is the focus on other kinds of exposure (mat signage, logos on shorts, etc.)?

C.M.: “We can’t disclose the specifics of our contractual agreement with ESPN LATAM. But we can say we are committed to maximizing the opportunity for our brand partners through our linear and digital television platforms.

We have a unique platform that allows us to engage one of the most important and desired consumer groups that are also historically avid fight fans and have an abundance of assets to leverage against the opportunity.

Our Chief Revenue Officer, Mike Pine, has a long history of building successful brand partnerships in the sports entertainment space. That includes MMA, where he made history several years ago by delivering the sport’s first-ever, blue-chip advertisers in Bud Light and Harley Davidson. The energy that Mike brings to Combate Americas is second to none.”

Portada: What would an ideal partnership with a Mexican company entail?

C.M.: “One of the most unique aspects of Combate Americas, other than our first-to-market position, is our viewership demographic that is younger than any other operators in the MMA business. Generation Z and millennials make up a HUGE percentage of our audience. So, when looking at potential partners, we are focused on brands that are authentic to our large and growing Mexican fan base, while also appealing to those younger demographics.”

Portada: Where does Combate see itself in the MMA universe? A niche in the Hispanic community, or are there global aspirations?

C.M.: “The Hispanic community has been vastly underserved in MMA, even though there are around 600 million Spanish speakers worldwide. That is why we exist, and we want this community to feel impacted and empowered by Combate Americas.